There aren't a glut of 10mm science fiction miniature lines for sure, but there's a few places you can look for an alternate sculpt of a model you don't care for. I've assembled a collection of all the various manufacturers that have SF models in roughly the same scale I can find that have ever existed. It's hard to tell how well 10 and 12 and 1:144 all compare with one another without placing them side-by-side, so that's what I'm aiming to do.

Primarily a Battletech style game of big stompy mecha warfare, they have a good variety of tanks and grav vehicles, aircraft, and infantry, all at very reasonable prices. Material is mostly Siocast/PVC/soft plastic, with occasional metal and resin. Casting quality on the few sample pieces I've received has been underwhelming. The cruise missile truck is particularly disappointing, covered in boring flat surfaces, sloppy transitions, and what details there are look almost hand sculpted. The infantry are decent, but there's a huge scale disparity between the heavy and light infantry. Not even one that can be explained by exoskeletal power armor or the like, they look like they're from different games.

A Canadian company that does primarily mech combat, with a few infantry and vehicles scattered among the range. Unfortunately, the infantry are massive in height and build compared to DZC, and do not mix at all. Which is a shame, as they have a great variety of poses and equipment and sculpt quality.

The mechs compare favorably with PHR Type-1 and 2s, especially the scout/recon and general purpose models. The larger mechs are more on the scale of the Shaltari walkers. Shown below are models from a recent Heavy Gear Blitz Southern Army Box. Plastic sprues with tons of options for weapons and equipment again. The poses could be better in many cases, and the metal versions of these and other mechs are a step up in detail for the price of being multipiece metal (though they're some of the easier multi-part metals I've worked with). I know some of the rest of the catalog, especially vehicles and the largest of mechs, use resin pieces.

Available from - Agents of Gaming

The ground combat branch of the Babylon 5 Wars family of games. While thoroughly a dead game, the caster still has a fair stock of models for sale at near-clearance prices.

Earth and Narn vehicles mix well with the UCM and Resistance, though the casting quality and sculpts aren't particularly great. The Narn tank in particular has big chunks missing out of it, and the Earth tank has some odd warping. In adition, the turret and machinegun don't fit particularly well in their indentations. The Earth flyer is even worse, the connection points for the wings are thin and pointed into shallow slots. It needs some extensive tricky pinning to not immediately fall apart.

Earth, Narn, and Centauri infantry all have generic interchangeable binocular-models they share between them. The Earth standard weapon is a typical looking rifle, the Centauri have chunky looking arms that make me think of sonic weaponry, the Narn have incredibly long rifles and a ton of models that are unarmed. They also have visible greaves and bandoliers on many of their infantry, where as Earth and Centauri are truly hard to differentiate beyond the Centauri sonic guns.

Minbari vehicles and infantry have a Scourge quality to them. I'm actually impressed with their infantry sculpts the most. The head ridges are discernible and the rifles have good texture to them. I'm going to make a couple stands of them as Aged-One Warriors, instead of the 'dinosaur' species they were using before humans in the books. 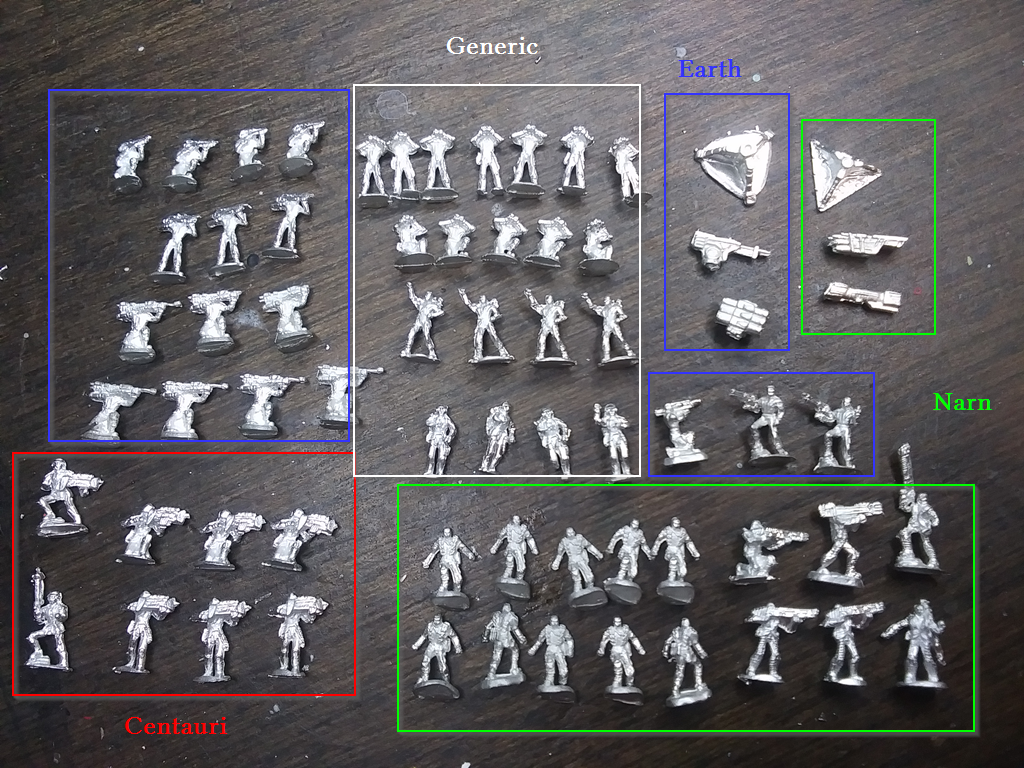 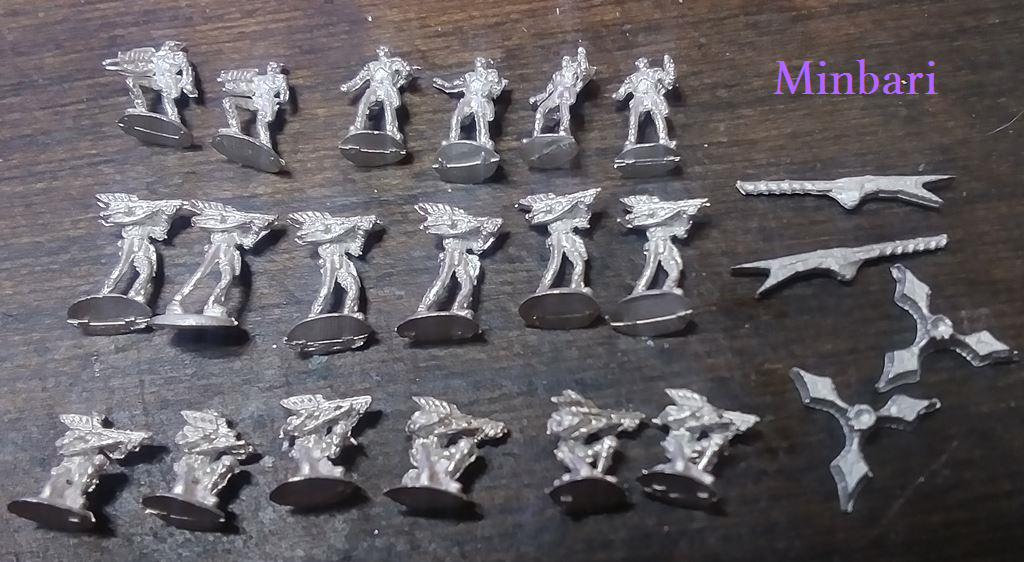 Out of Australia, Transformers with the numbers filed off. Sadly too small of scale to mix with Dropzone, despite having some interesting sculpts. The casting quality is adequate, though a lot of details lack sharp definition, but the posing of the models usually makes up for it. A good variety of sculpts and equipment as well. 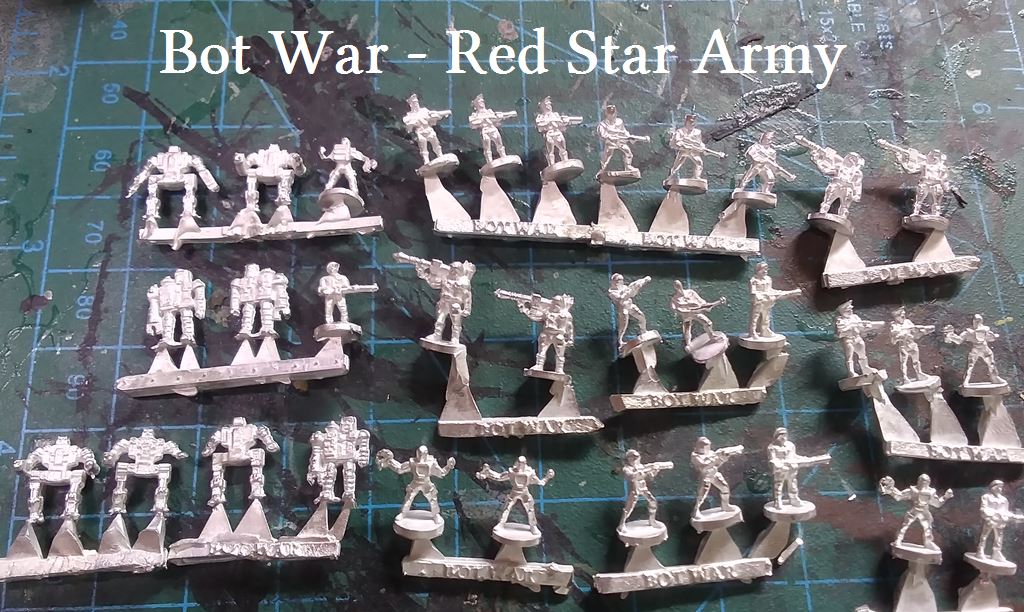 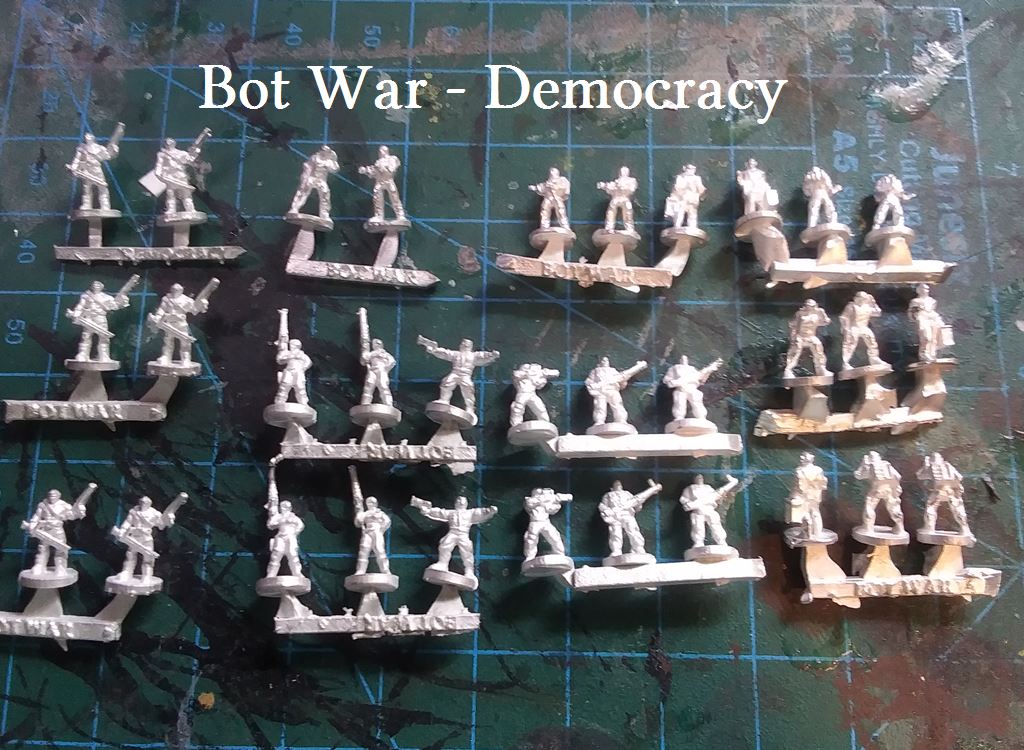 One of the last games from Spartan before they collapsed. Warcradle now owns the license and has started redesigning its sister game of space fleet combat, but there's no signs of life in Planetfall for the time being, and the clearance sales have all run dry so all that's left are what's getting scalped on eBay.

Infantry are closer to 12mm than 10, the Dindrenzi ostensibly being humans in power armor. I only have a few pieces so far, other humanoid factions may compare better, and I'm certain the overtly non-human are differently sized. The infantry come in a mix of resin models cast as part of bases, with half to 2/3rds as loose metal models. The vehicles all have a very chunky appearance that clashes with the compact aesthetic of Dropzone. 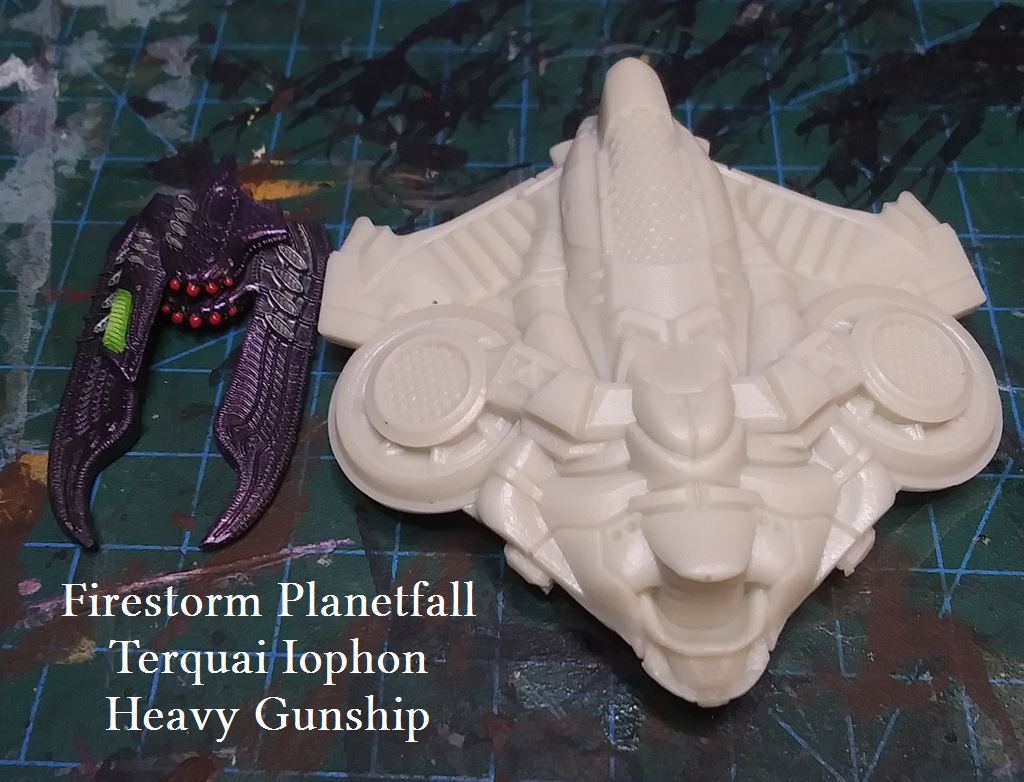 Pendraken has about a dozen packs of 10mm SF models mostly based on the Ridley Scott Aliens movies. The infantry is mostly 3 poses per set except the Power Armor which is 10 identical models. There's a lot of detail on the models but also a lot of surface 'noise' that detracts from it. The APC is as disappointing as most of the metal vehicles I've seen so far. This one had a lot of mold slippage and bubbles. 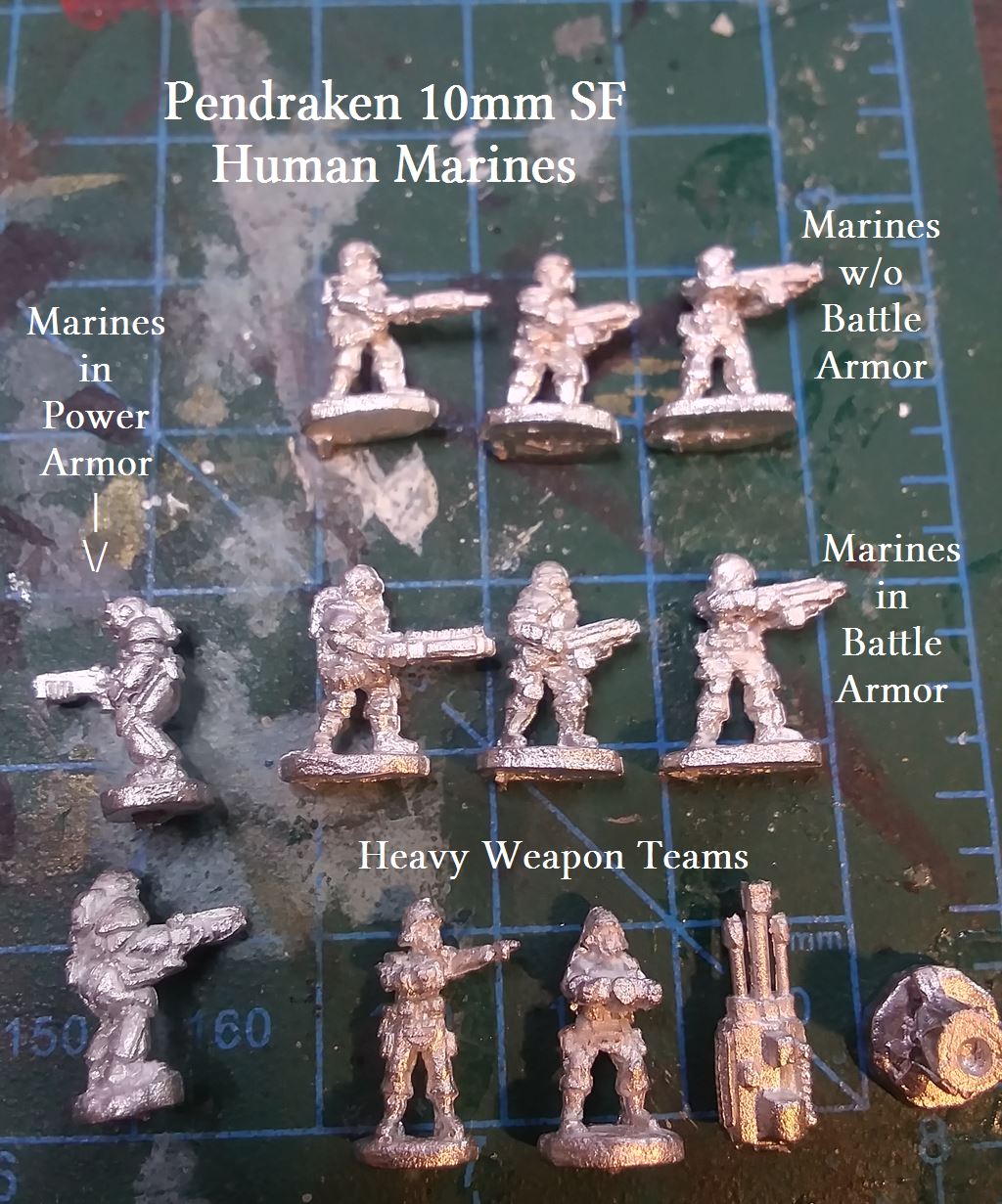 For Example - The Lazy Forger at MyMiniFactory

Finally, there's 3D printing. Most 28mm sculpted models will not scale down to 10mm well. The details that make a 28mm model look interesting turn into noise or outright disappear at 10mm (generally 15mm is the threshold), while thin arms or other components of the model become so delicate that they break too easily. 6mm tends to scale up perfectly well (~140-155% of the original model size) and 6mm is more common scale for SF microarmor anyways.