My friend Tree's first game, so a lot of minor mistakes and rules checking but otherwise fun, despite my crushing defeat.

Targets of Opportunity, with 5 objectives and corner deployment (just because I've played a lot of bog standard ToO lately and wanted to switch things up a bit, but not too much). The two biggest types of building are DP30, the two middle sizes are DP20, and the smallest size is DP10. Everything with Armor 11. v2.2.0 Rules with no homebrew, since it's a first game and all. 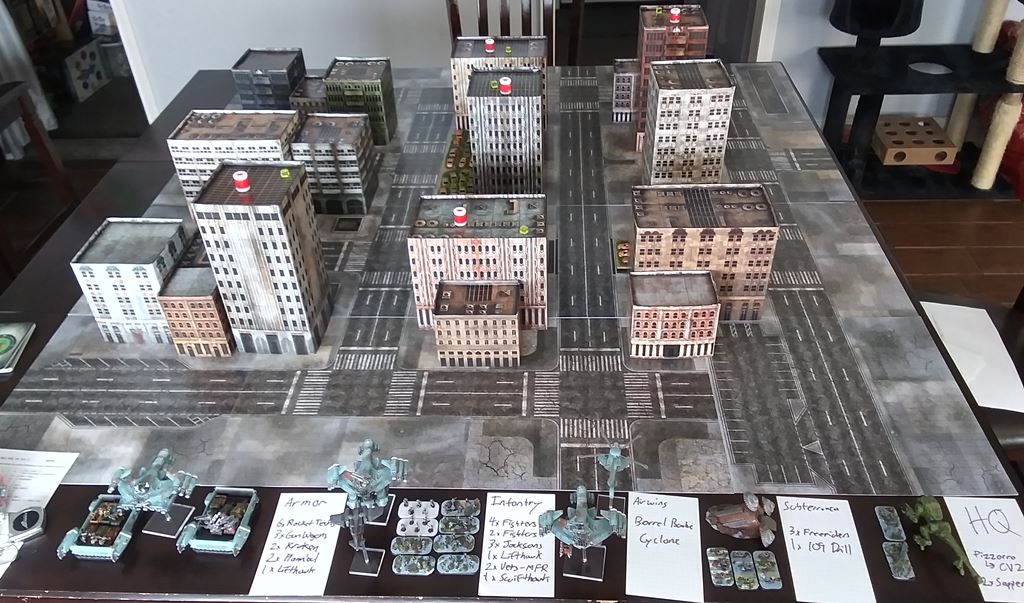 It dawned on me recently that most of my lists are doubles of different units, a lot of repetition. This was a deliberately more varied than normal list, just to shake things up a bit. The idea was to drop the big bomb on the largest concentration of Shaltari infantry, follow up with the Sappers, then insert the Vets to finish them off, and give my more basic infantry room to collect and extract objectives. The Technicals were to take on the Ocelot, the Hannibals and Cyclone the Tomahawks, the Gun Wagons every Eden possible and the Freeriders to shore up whatever element needs it.

That was the plan at least. 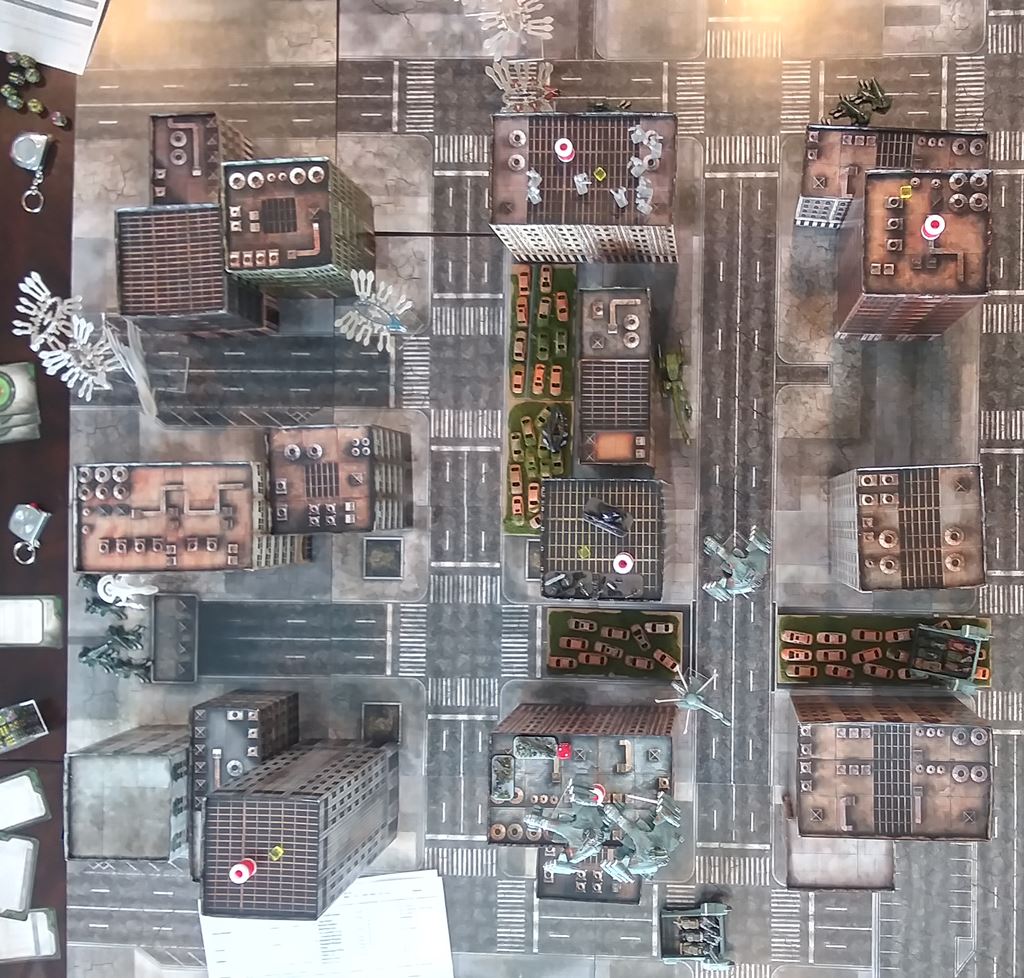 Turn 1 was mostly bringing units onto the board and initial positioning. Lots of Shaltari dropping onto the table, whereas the Resistance was holding off and going for deeper deployment. This would turn out to be a disastrous choice shortly. 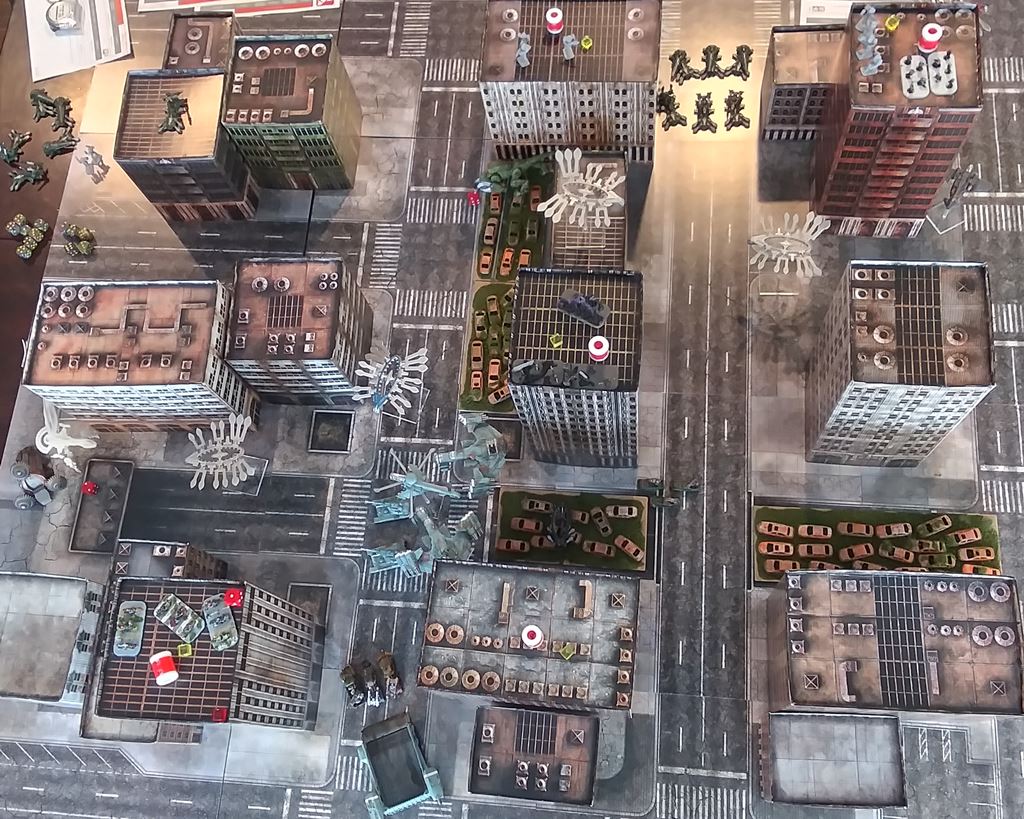 Shaltari take initiative and delete an entire platoon of infantry. Kukris move up and open fire on the Lifthawk carrying 3 APCs of Fighters. It takes 5 damage and rolls a 6 on the aircraft destruction table, exploding into fine debris with no survivors whatsoever. There goes half my infantry.

The Ocelot draws a bead on my Kraken full of Technicals and obliterates it. 4 manage to drive out of the wreckage, but a Tomahawk finishes off one more, leaving an ineffective group of 3 of them.

Hannibals wound the ocelot and nothing else, and the Gun wagons roll 6 damage on an Eden and watch the shields flash and absorb every bullet as it makes 6 passive CM saves. The Braves finish off the Sappers with another volley after they yet again accomplish pretty much nothing, and the Freeriders slap a mine on the Ocelot before diving for cover in an objective building. MFRs go for the least defended objective building on the far side, taking out two Ronin and wounding another.

I should have conceded the armor fight in that section of the board, but I wanted revenge and dropped the big bomb on a gaggle of Tomahawks and Kukri, eliminating 5 of them.

Turn 3 - We can Still Salvage This Clusterfuck 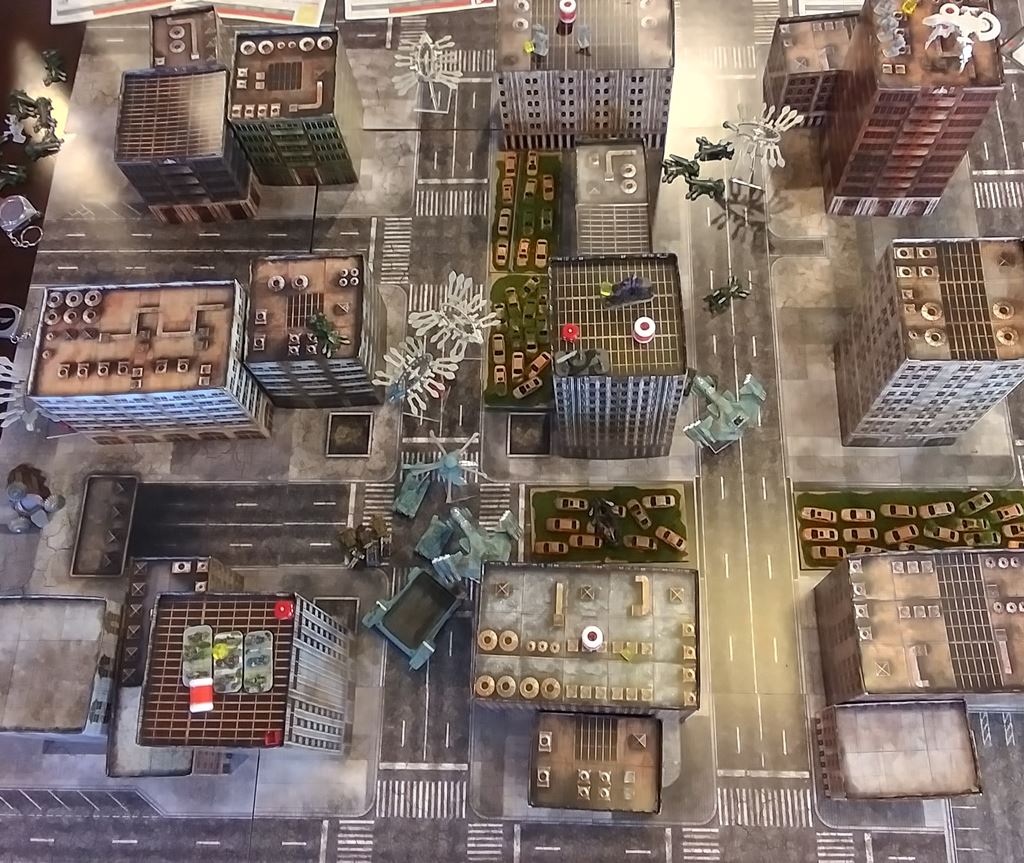 Ronin retaliate and murder all but 2 MFRs, who run away, and then a Kukri shoots down their transport which lands on them finishing them off. The other Ronin finish off my commander in the Pizzaro; never had a chance to play a command card at all. Ocelot teleports across the map on top of the building the Ronin just exterminated, like it's gloating up there on the roof.

Frag Barrel takes out some more Kukri and the Cyclone and other random fire kill some Braves. I'm hoping at this point to just eliminate enough gates to strand objectives on the board which, if everything works out, I extract two and at least pull off a draw. 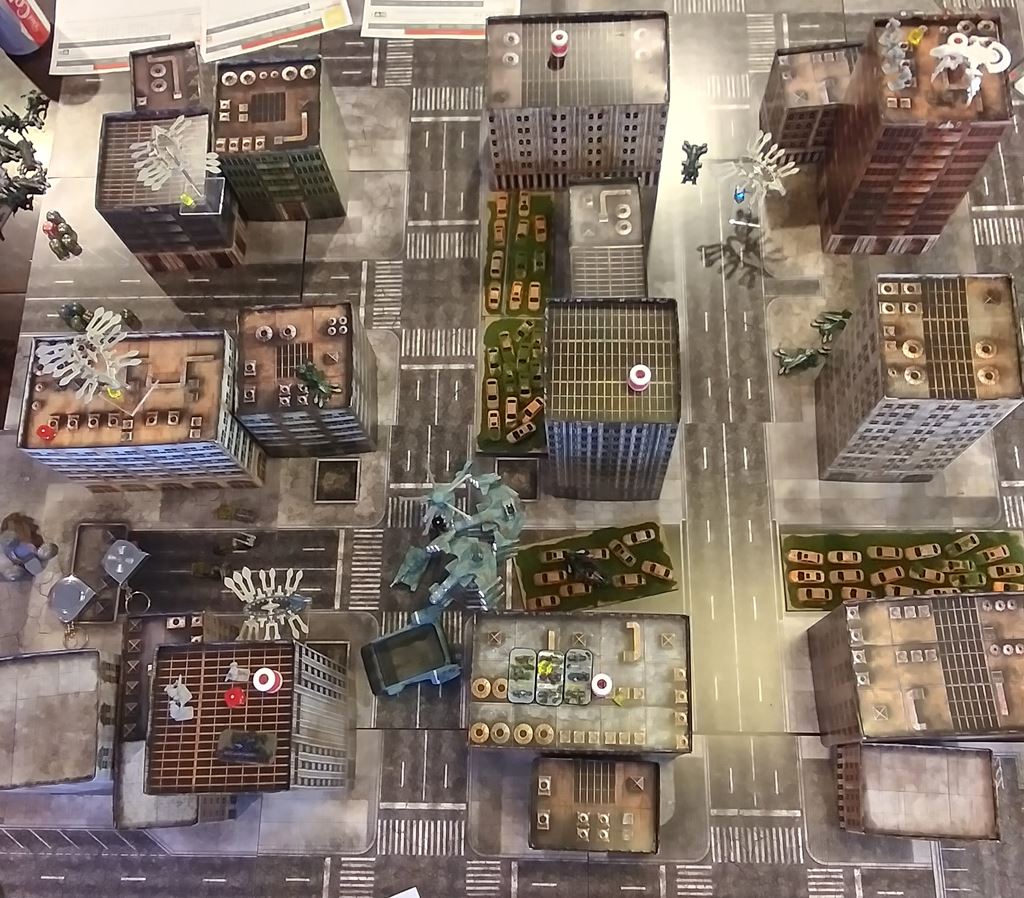 The ocelot snipes a Hannibal from across the board.

Reaction fire damages a few more gates, but not enough are down to secure a draw.

Freeriders are playing cat and mouse with the Daimyo and his entourage while the rest of my units are trying to generate enough blow-through collateral damage to weaken them, but it's not enough. 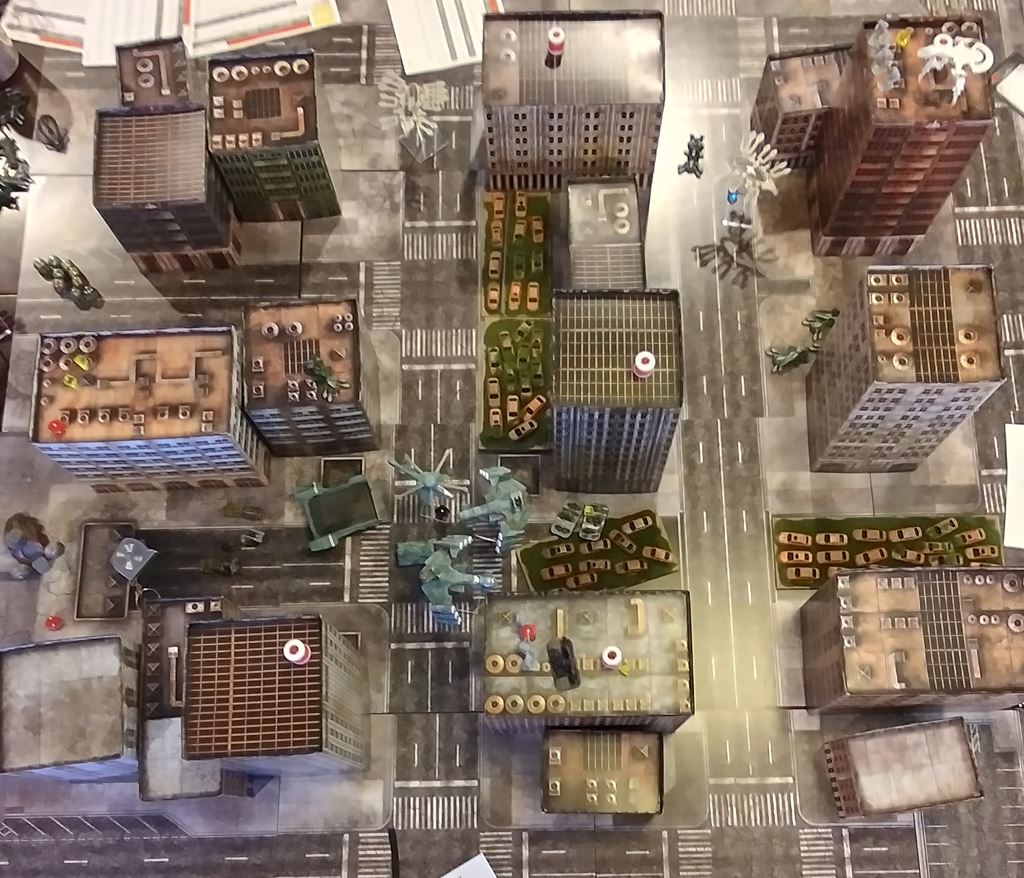 The Daimyo catches up, throws the Freeriders out of the building, and meanwhile two objectives are off the board for the Shaltari and at this point the game is a forgone conclusion, with the Shaltari claiming 4+ VP, and the Resistance holding 1. I concede defeat.

The Kukri shooting down half my infantry was a pivotal moment in the game. And it was a mistake. The Kukri have a 4" Move&Fire restriction on their ion cannons, so the Lifthawk was slightly out of their range. If either of us had caught the M&F restriction at the time, it would have been a very different game. That said, there's command cards capable of supporting these shenanigans, so it's not like it was impossible under all circumstances. Also I rolled a 6 and it blew up mid-air with no survivors, so my shitty luck was also a factor.

I keep forgetting the movement bonus for streets and wheeled vehicles. I really need to stop doing that.

My Pizzaro kind of wandered around never finding a good opportunity to attack. And my early command cards weren't particularly useful either. Freeriders remain the MVPs. And I do love Sappers still as well, they did good work before being murdered off the board.

I think Tree and I would both like to incorporate some houserules for next time, at least simultaneous CQ resolution and the Search rules from the Houserules post.

Ronin are the most worrisome units on the board, for the same reason I love the Freeriders. They can escape with an objective through ANY gate anywhere, or teleport across the board. With ubiquitous gate coverage, they're just incredibly flexible, durable, and have solid anti-armor damage output. I concentrated on the Ocelot as the big scary unit, while these bastards were laughing at my distraction.

Seriously though, Ronin either need to cost more or have their DP reduced back down from 2 to 1. They outperform Braves to such an absurd degree that the only reason Tree brought any Braves is because he was forced to by the army rules.