The Brainstorm, Days Before

Tree: Perhaps we need to limit access points into buildings. I Do not know how else we get infantry out for these low E weapons, Infantry weapons, and weapons that deal with cover. Or we have too many buildings, so light targets never need to be seen. As I had another thought about how we end by turn 3 when we play and the armies are devastated.

Ty: last game we didn't calc any victory points till end of round 6 and we still shoved everything into the middle of the board. The meeting of the four quarter edges was a strategic choke. "the fault, dear Brutus, lies not in our stars, but in ourselves"

Ty: OK how about this, we call the scenario "data extraction" the large buildings each with an unlimited number of mobile scan objectives. Your goal is to grab as much data as possible while fighting off the other side/sides. It incentives keeping units alive as long as possible because round 5 objectives are worth just as much as round 1 objectives.

Tree: Or setting up the map differently, more cover and less bunkers. The armor and infantry games feel like two separate things. Also trying to think of scenario ideas that aren't point rushing and fireballs cause there is no line between offenses and defenses.

Ty: I’m down for some cover, if nothing else we can try it out. So we will need to come up with some reason for infantry to actually deploy there, like some sort of objective. Because otherwise they never would.

Tree: I think our play is a result of the scenario. We are fighting over the same objective points in a game about rapid insertion. If there was some asymmetry to how to score points we'd be less prone to just blitz into the same area

Ty: How about some sort of control over time objective. Where you get points for having more value of stuff within range of the objective and it calls every turn. That way getting there first matters, but surviving and sticking around also matters? And we do that same call but with, let’s say 5 different objectives so we aren’t necessarily fighting over just one of them?

Tree: No more like the train or orbital laser scenarios. Where the objectives are tied together but different for each side. Or a breakthrough scenario in other games where one side scores by hitting opposite board side and the other gets kill points. I also agree that the static points objectives in the the game we played before this also left us in an odd space

Ty: Well those didn’t trigger till end of game. I like the idea of having them trigger and accumulate over time

Tree:Well not static. The ones we could claim and remove without leaving. But were in bunkers so only infantry control mattered and our armour was left to pot shot buildings. Oh perhaps toggle objectives in a defensible place rather than ramping points. Toggled by unit action and not unit weight. Spend and action and when its time to score you will get a point. Either at set turns, each turn OR (because something is wrong with me) end of round dice roll to see if its a scoring round.

Ty: That's an intriguing idea, sometimes the wifi signal drops out and you cant get the data transferred. How about we treat it as a file, under ideal conditions you can retrieve the file quickly and send it electronically, and you get to score the pt immediately. Otherwise its a slower process and point turns into a mobile objective that has to be transferred off the board.

Tree:Or the file is a moveable objective and the data transfer node is where you can take it rather than off board

Ty: I also like the idea of not knowing how many points the objective will be worth till it is uploaded, like use a d3 or d3-1.

Board layout decided by helpful 10 year old, with no adult input. Worked out great

Then, we designated 2 buildings as being 'transmission points', the only areas of the battlefield where anyone can get a clean uplink to transmit data back to the fleet. 12 objectives scattered around the other buildings on the table. When a mobile objective is moved to a transmission tower, you use an action to transmit it and roll a D3-1 for VP.

The two transmission buildings are A11 30DP and standard, the rest are bombed out husks that provide Soft and Body cover and are garrisonable, but do not obstruct line of sight when shooting into the building. Thus, infantry have a reason not to just hunker in the middle, and more than only flame weapons can fire on them.

Corner deployment, staying on the 1x1 tile in each, leaving PHR with the middle spot and closest tower, and the other tower opposite them. 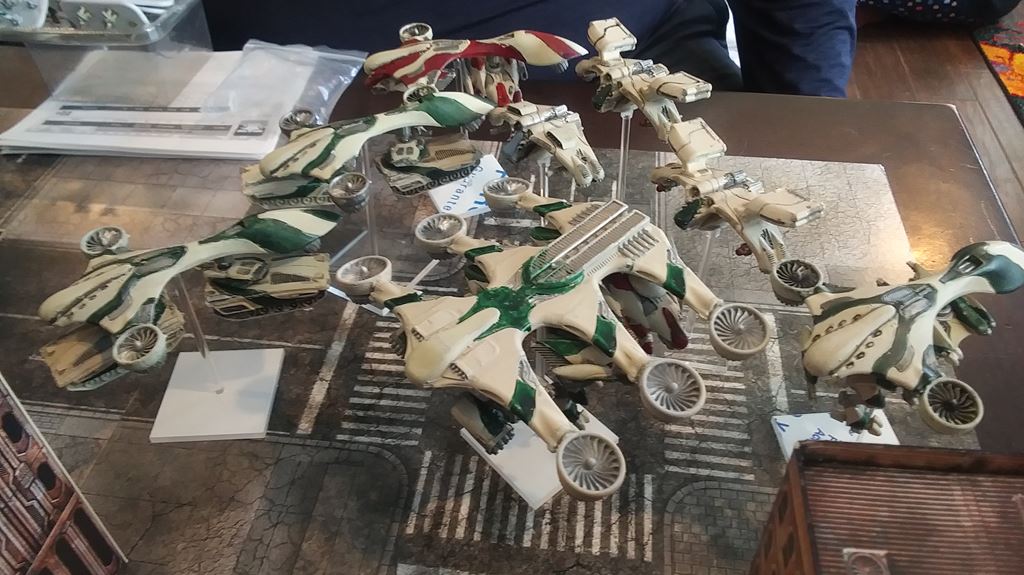 Ty: "Essentially, I have been trying to wedge as much AA as possible into army lists, I feel like that is the natural reaction to the games we have played. But on the way home yesterday, I started thinking about the Peloponnesian War (I was listening to an audiobook about Pericles). And the Athenians didn't run out a bunch of hoplites to fight Sparta, they were outmatched in that area, so they emphasized other things. Long and short...0 AA force is the plan" - PHR Commander 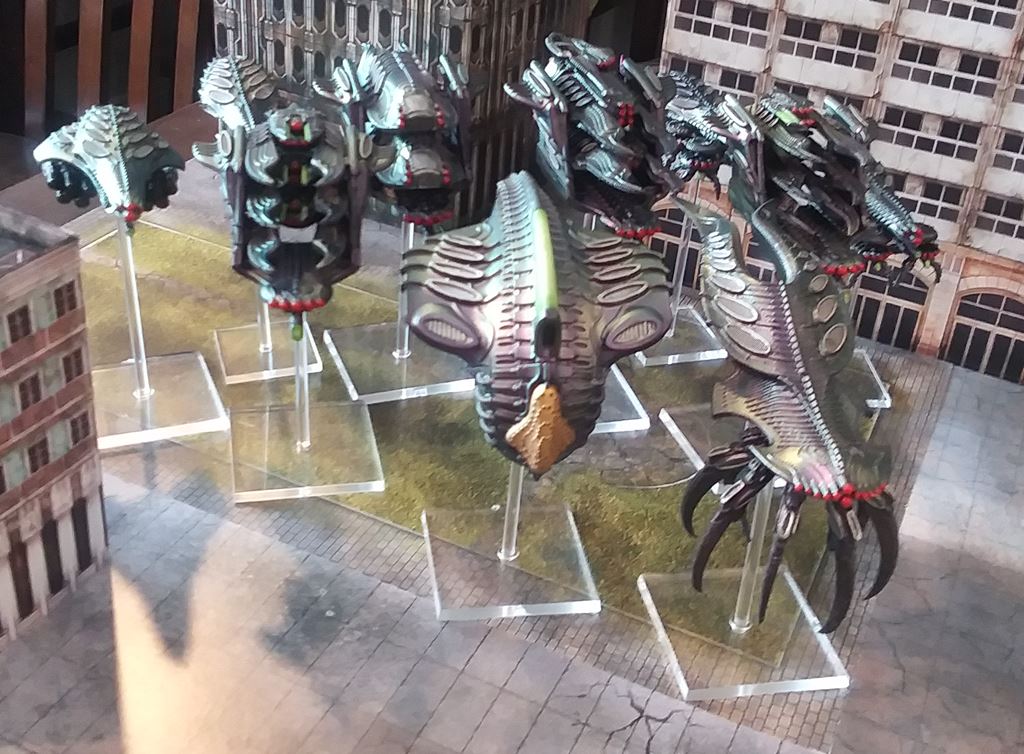 Slyphic: The Overseer has been very disappointing lately, so lets leave it at home and take something that rarely gets used. The Annihilator. Otherwise a fairly standard force for me. 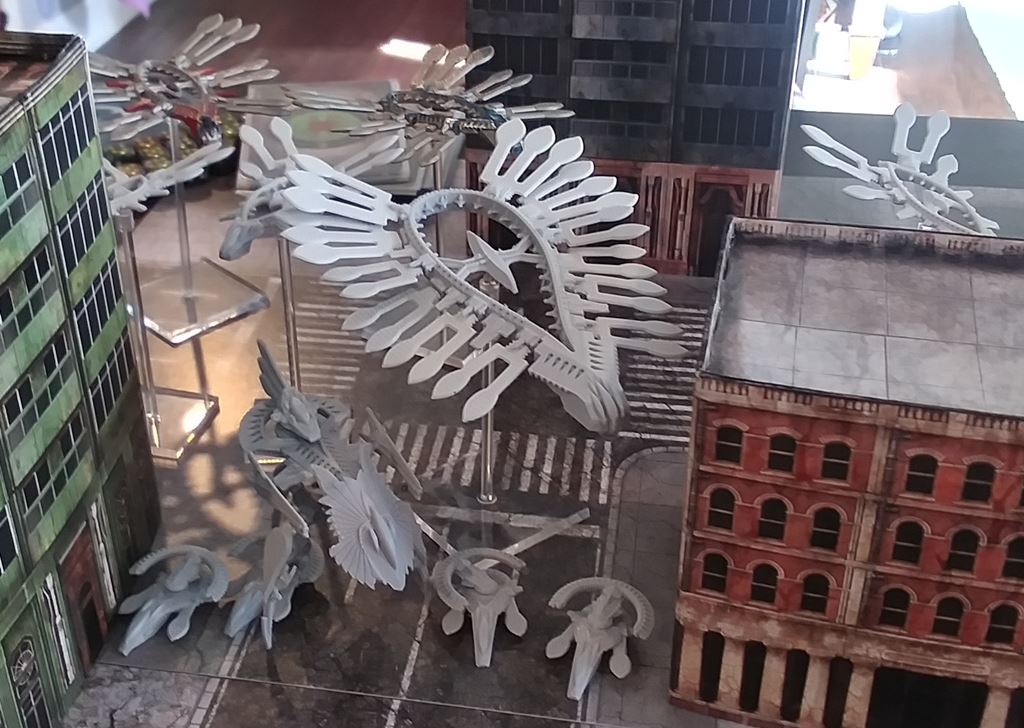 Tree: I wanted to try weapon types I haven't run before. Cover, Flame, and Strafe. 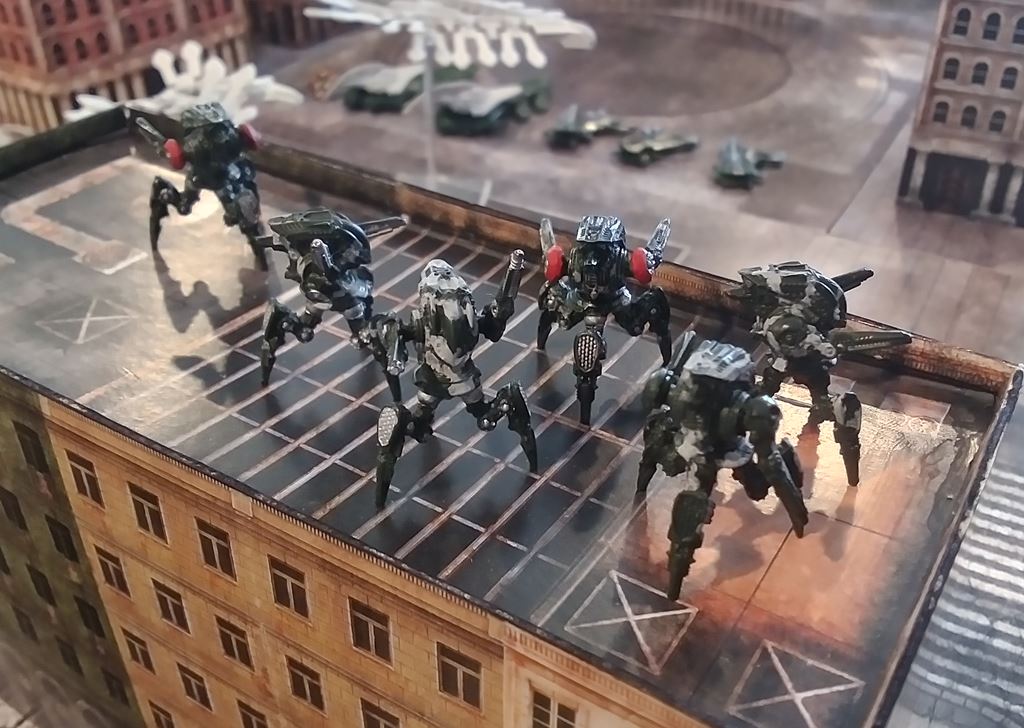 Most of the pics of the Ronin I've taken over the last few months have been poorly lit and out of focus and just generally bad. Which is a shame, as they're both well painted and frequent MVPs. 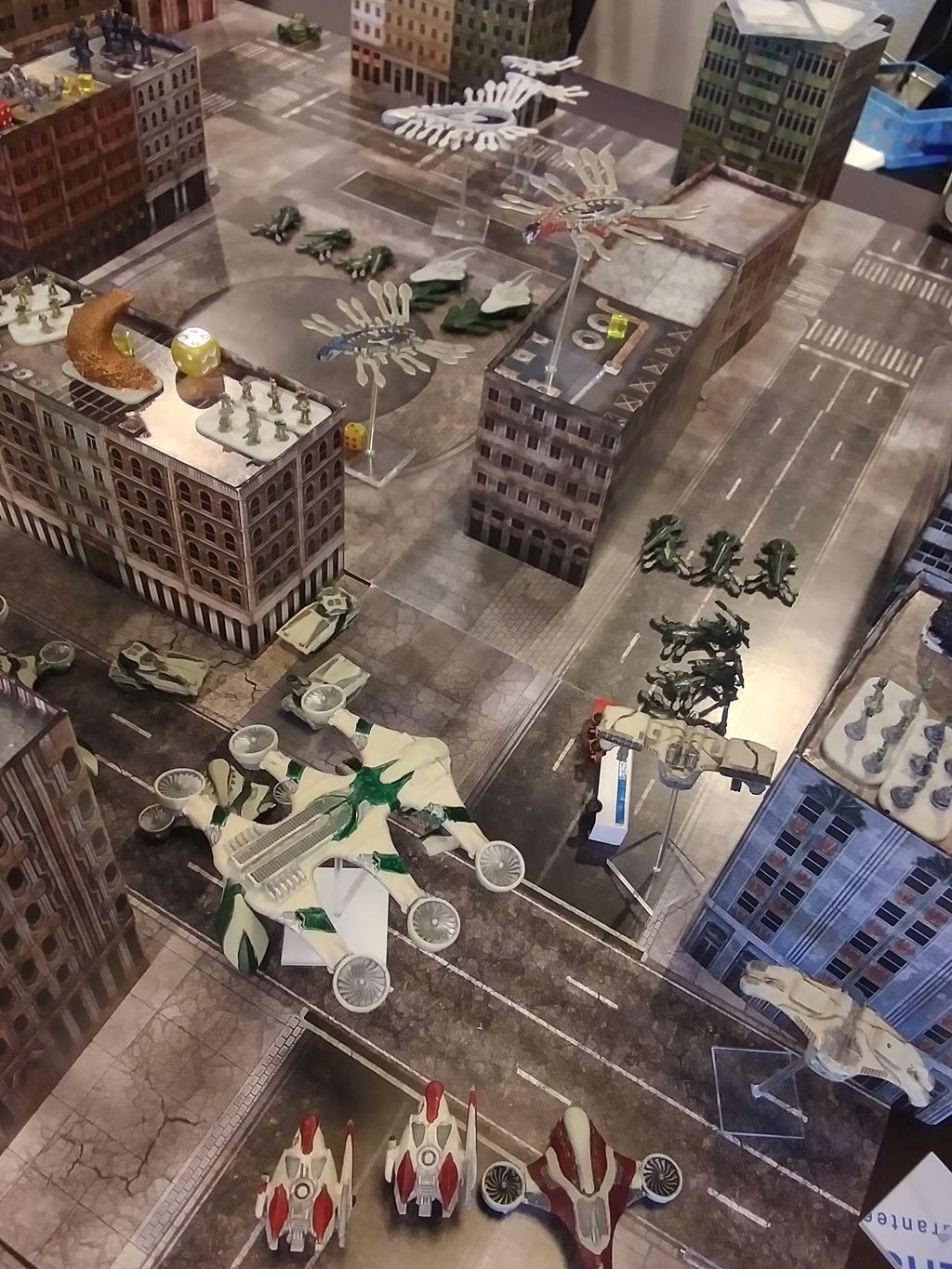 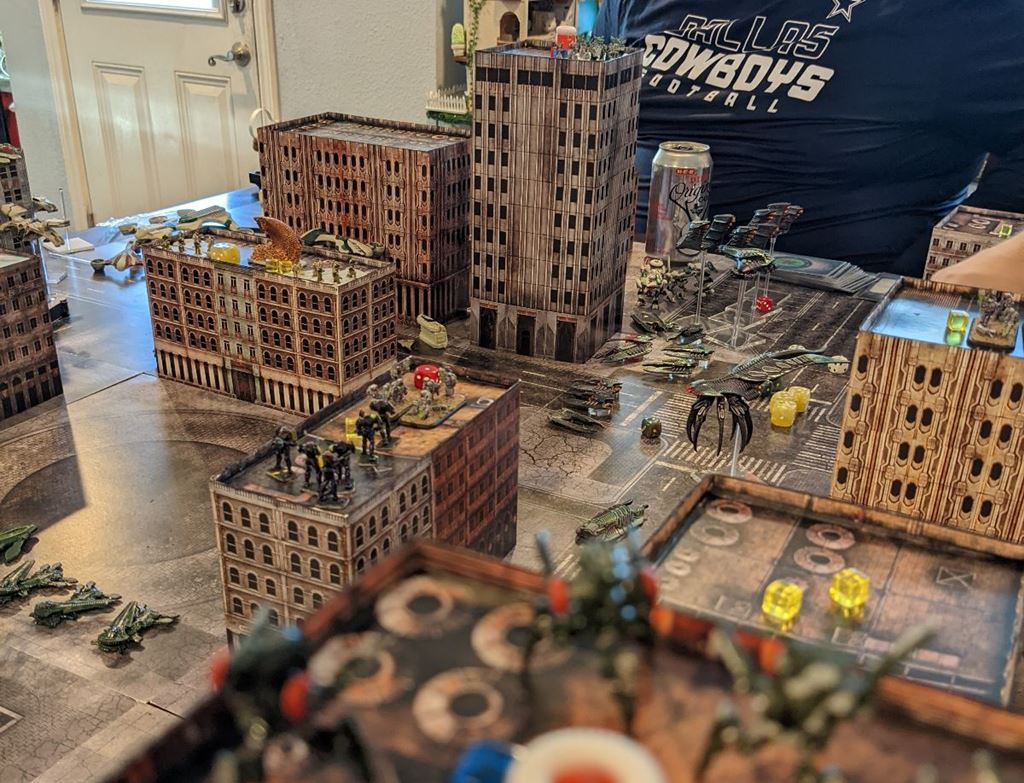 The state of things after turn 1, forces mostly deployed. PHR made an early push to secure their close tower, and took a lot of fire for it, but held on. The Razorworm barrage into it began. 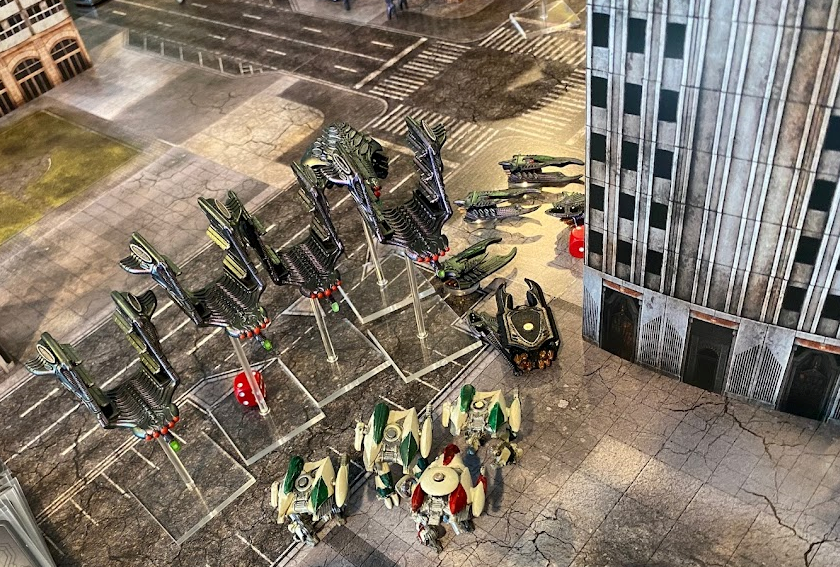 The 'Flock of Doom'. What happens when Marauders drop off fast vehicles, with no good role left but to go hunting and hoping to roll well on Plasma hose fire. 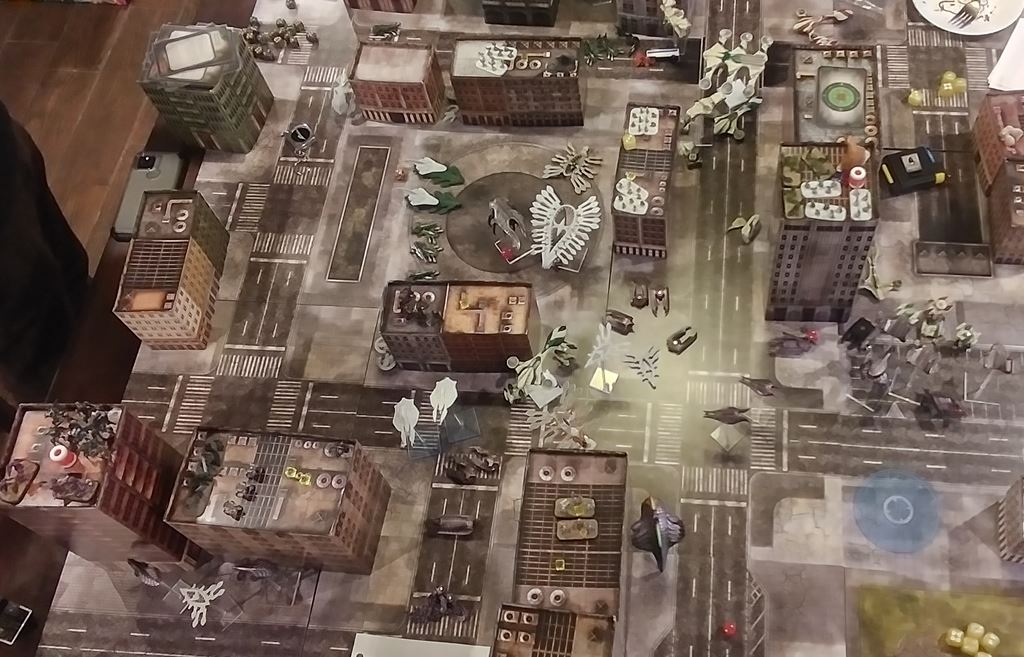 Most multi-objective buildings are now contested, with dual Shaltari Heavy Microwave Cannons cooking the middle building of Immortals like a bag of popcorn. Also observe the Desolator, cruising through a cloud of gate reaction fire, barely injured. The next turn, if finally reaches position to fire the Ion Storm Generator, taking out more units than I think I've ever seen it before, parked directly over the Shaltari armor.

And finally, the Annihilator does something useful. The previous turn it missed the to-hit roll and only injured a single walker, but this tike the template hit and wiped out the whole squad. Literally the first kills this model has ever scored for me. 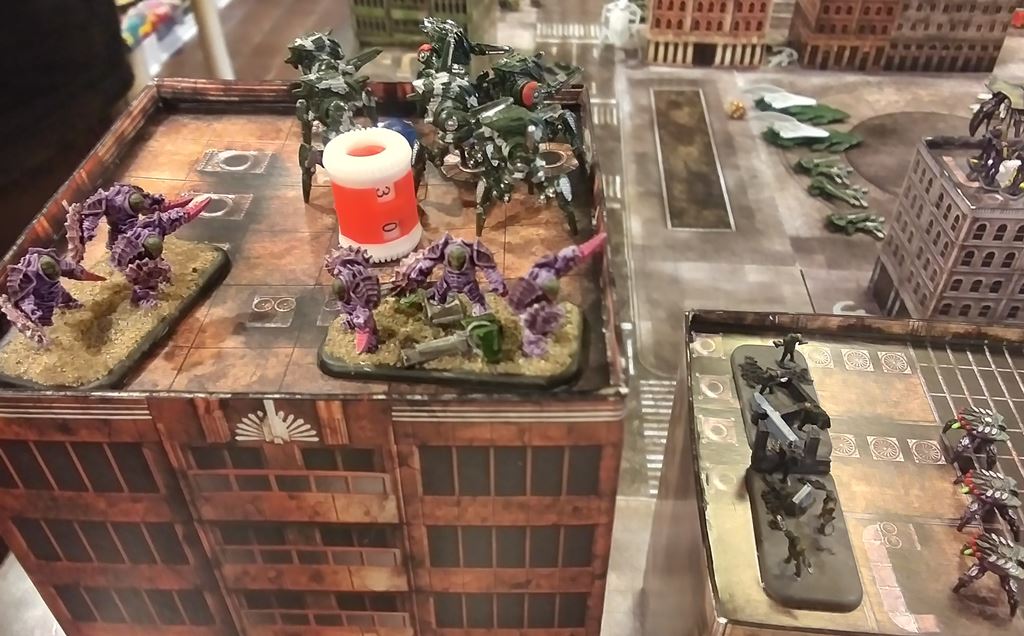 We both were piling units into this building, waiting for an advantage before starting a fight. 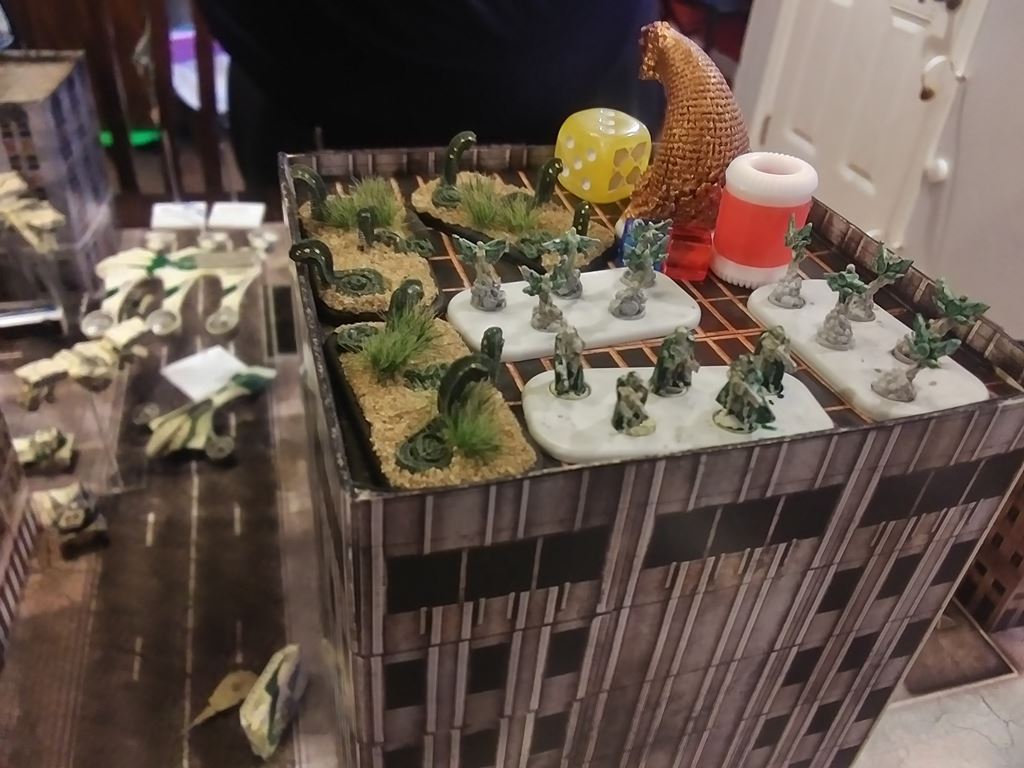 Maximum snakeage. They chew through Immortals and equivalents. 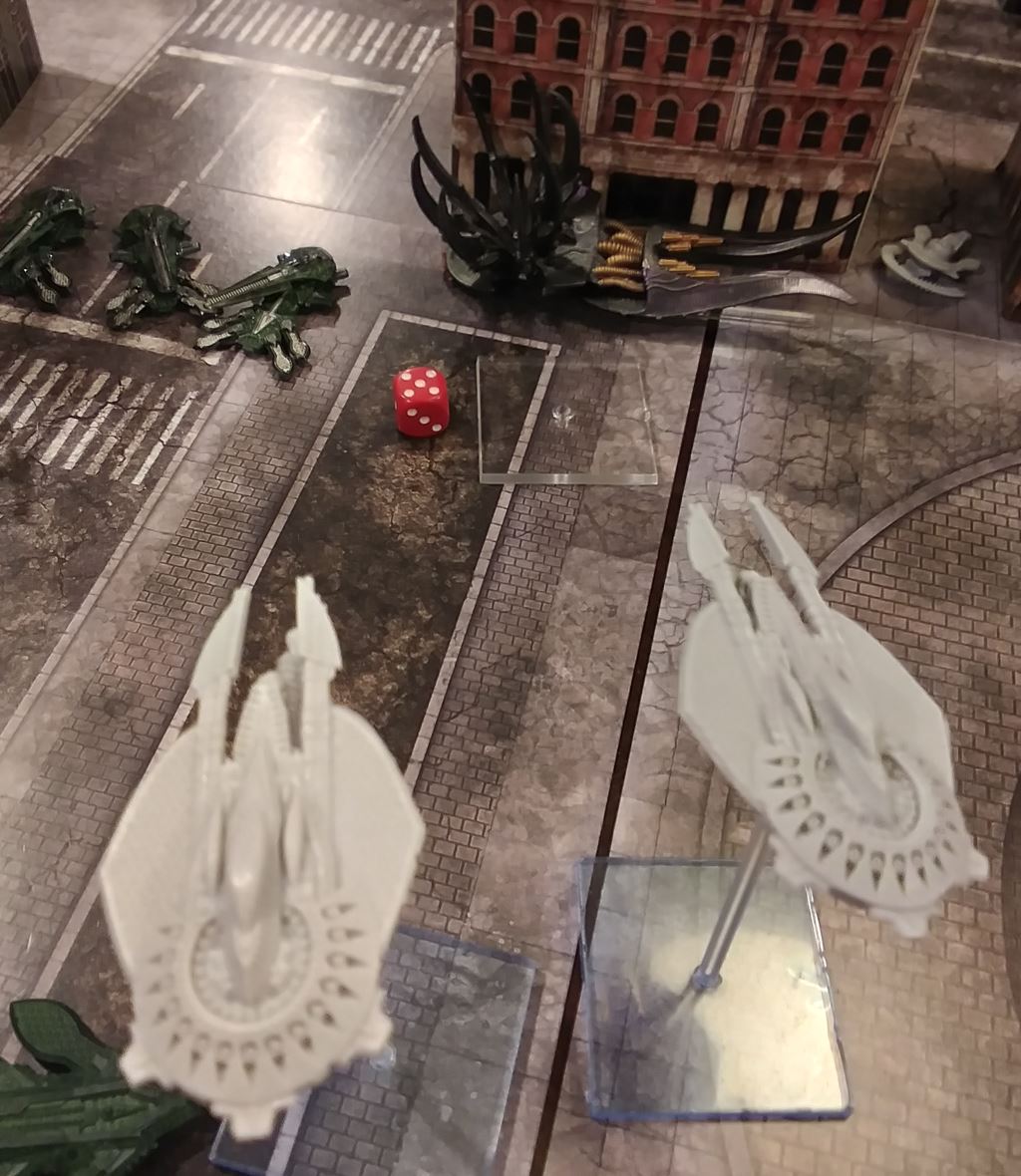 The Desolator pays for its one good turn with its life, being mercilessly gunned down by an interceptor pass. 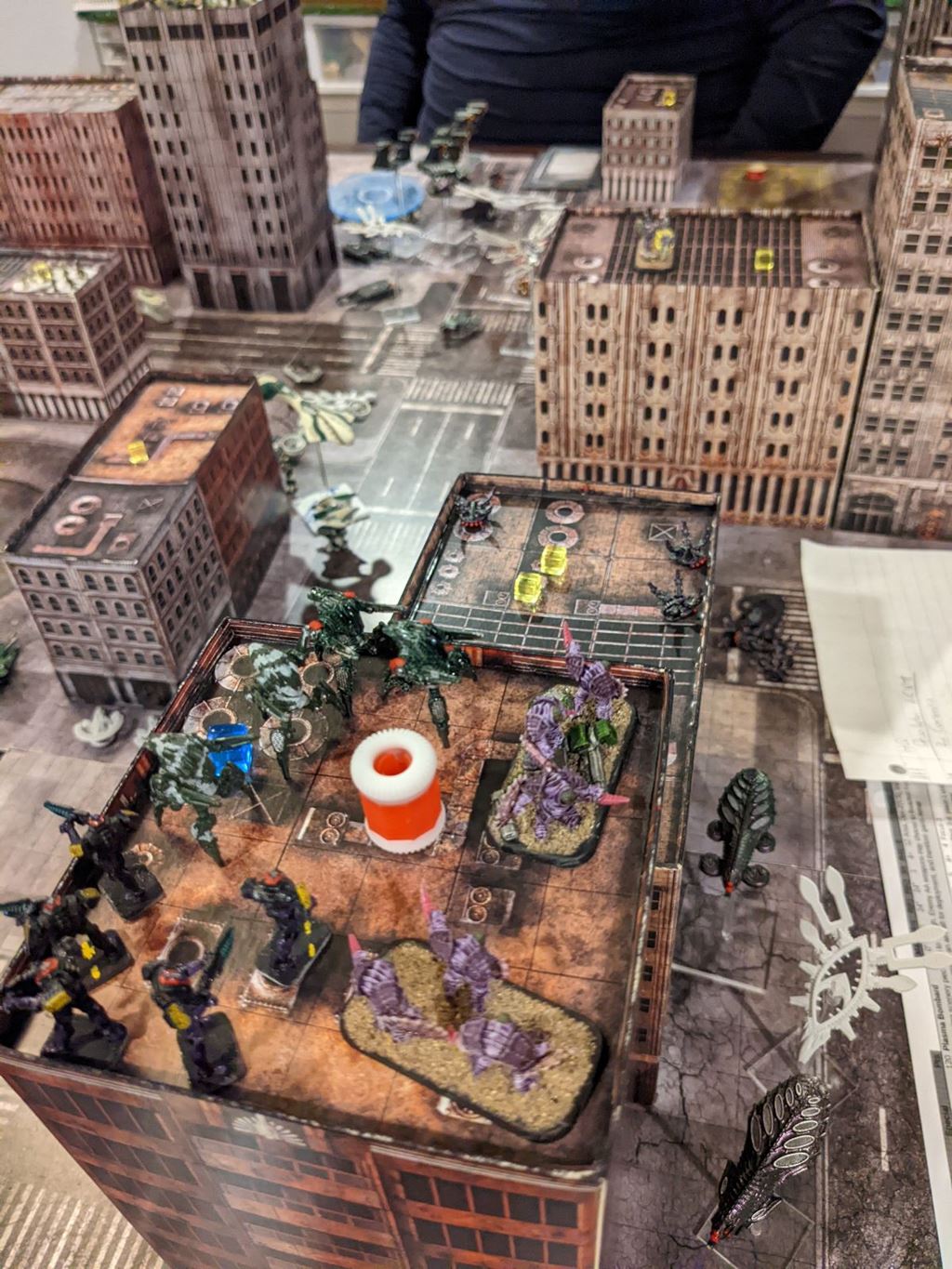 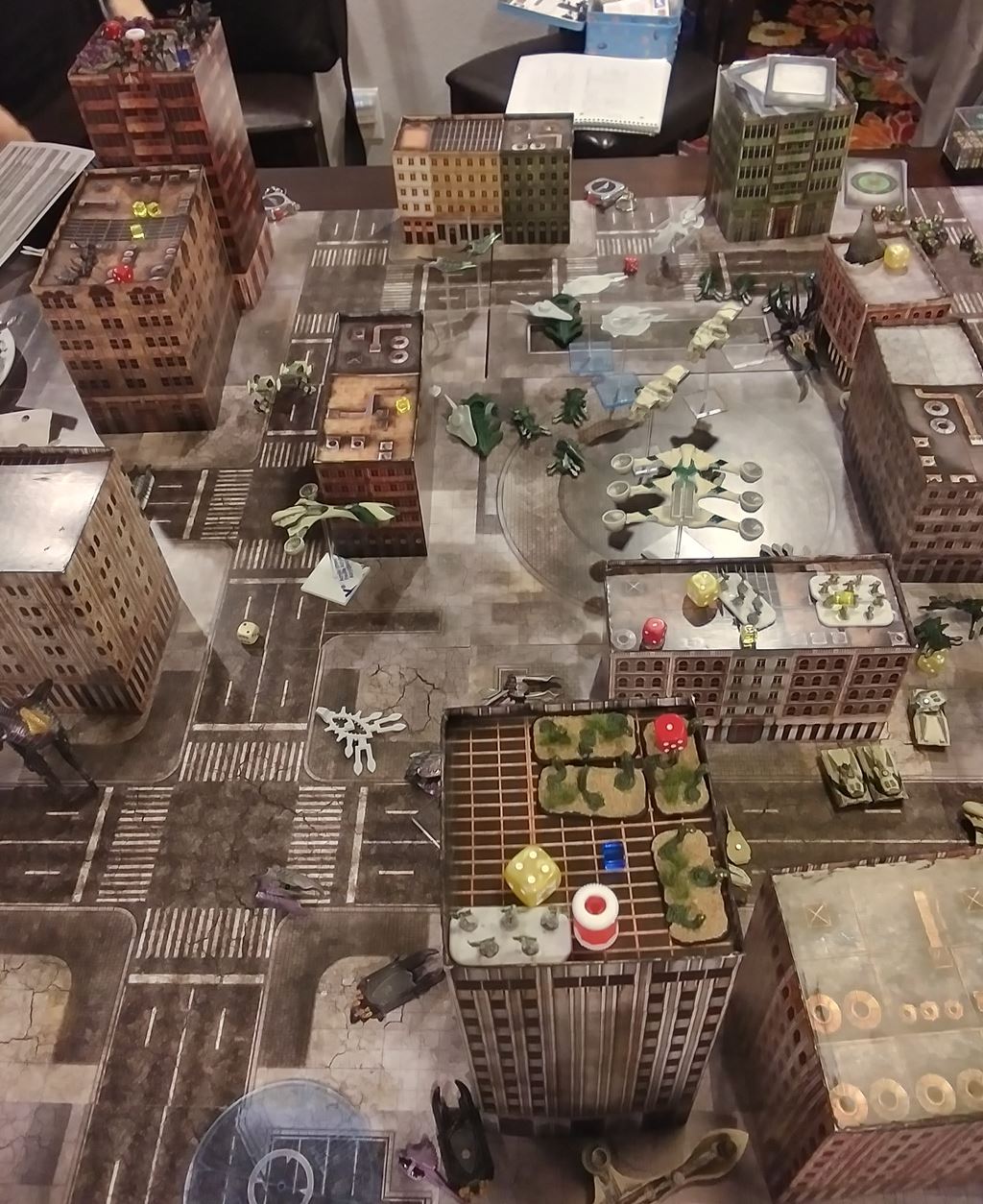 The final board state. We're all fairly spent, with only two objectives being beamed off all game, and one of them rolling a 0.

WE. NEED. MORE. AA. In particular I need to finish my Stalkers (and receive my Harbingers and extra Corsairs) so I can bring a better mix of it to the next game. And the Oppressor.

I think being able to block enemy infantry from entering a building is the answer we're looking for. It gives infantry a good reason to go to a wall, and anti-infantry weapons a purpose supporting assaults on a building. Also a universal -1 to ALL Morale scores. Everything at 2+ is boring and dumb, like rolling crit fails in D&D. And again Collateral did basically nothing and was a waste of time; we need to roll back to v1 rules but Beta energy levels. And if we're going to do that, we should address the other cog grinding against those rules and fix Area as well.