Ty found an Orbital Laser model and painted it up, and we futzed with the old laser scenario to make it work better for 3 players 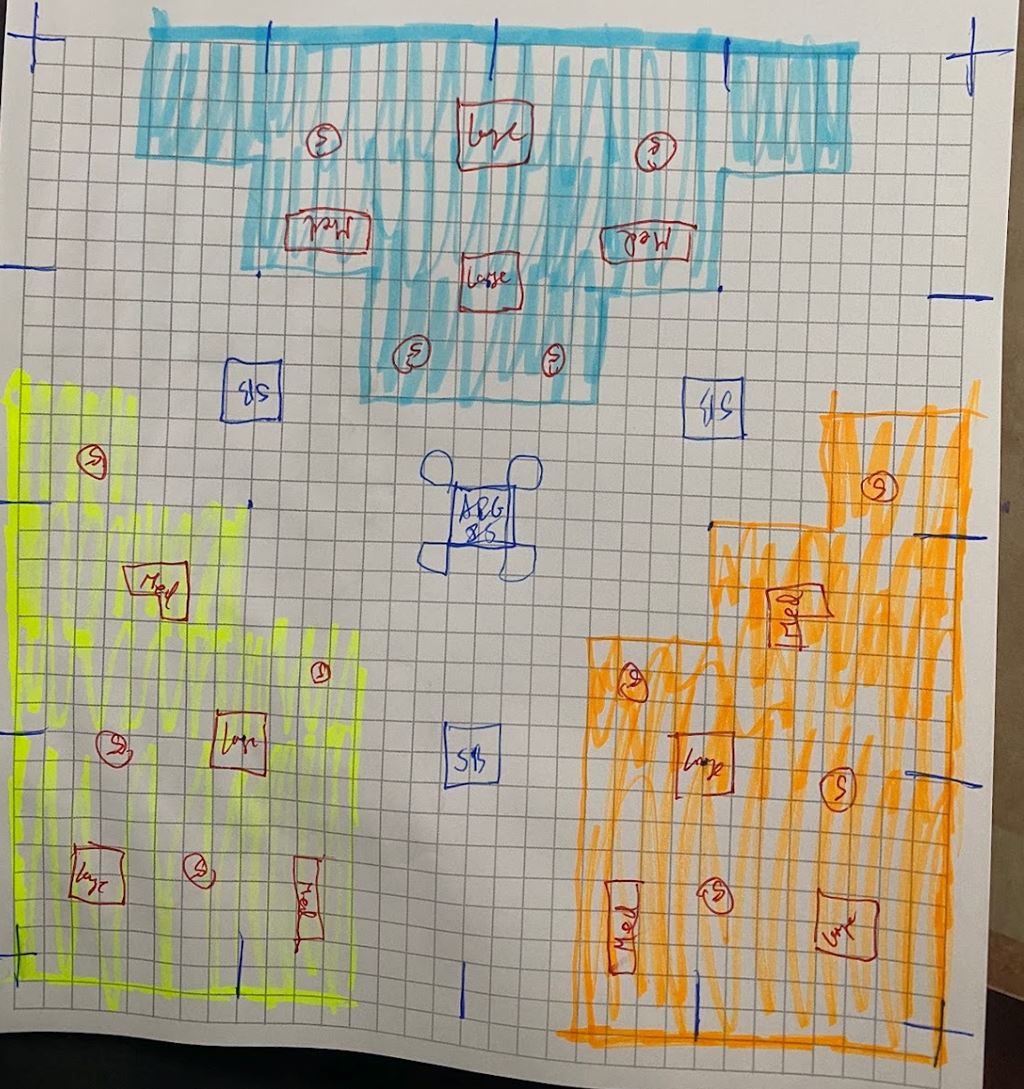 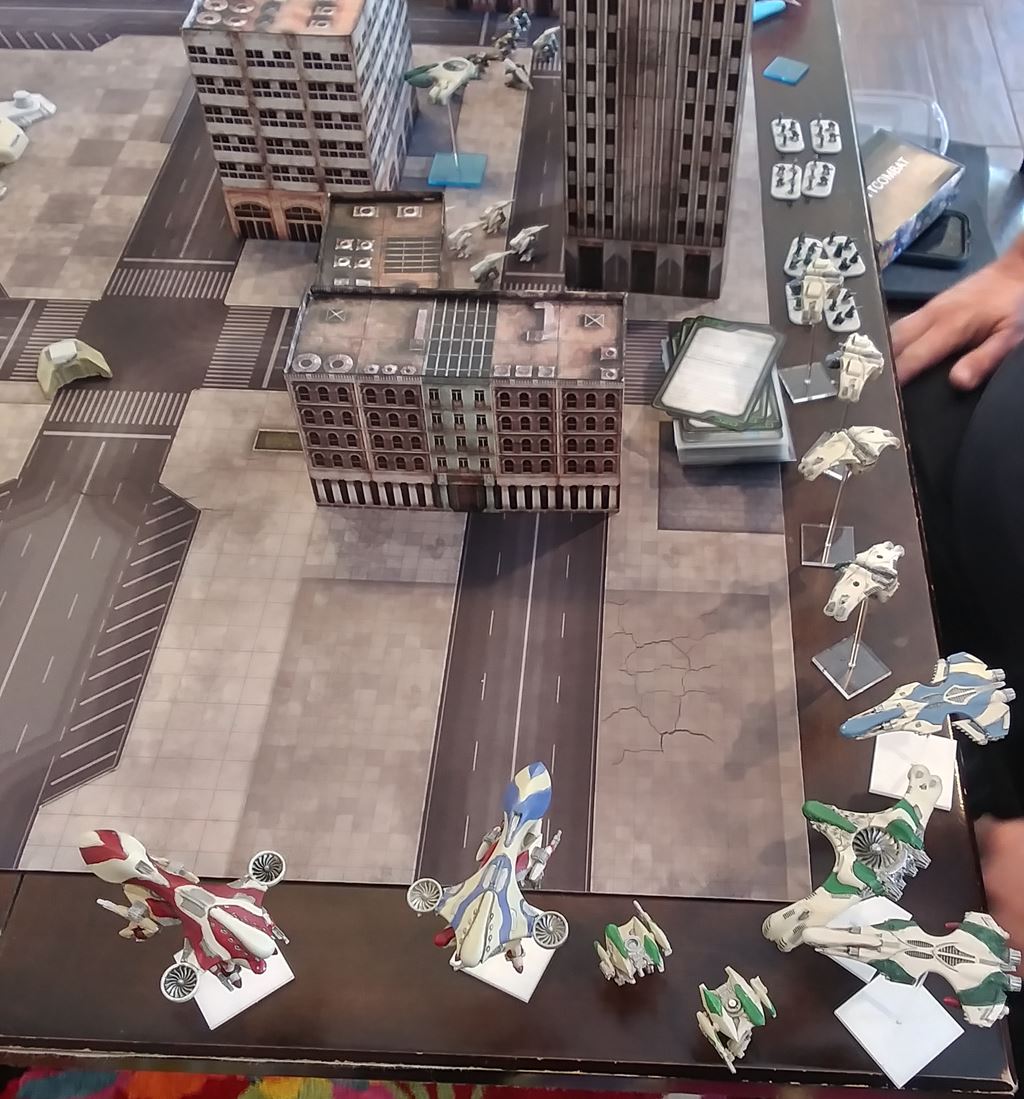 Ty: I decided the game would be about volume of firepower, so I made a list of the PHR units that had the most E6/E7 shots per their points cost. So you get the Janus heavy list and the snipers.

Tree: Collapsing buildings are a good way to wipeout my low wound inf bases, which is why I also went for long shot point denial 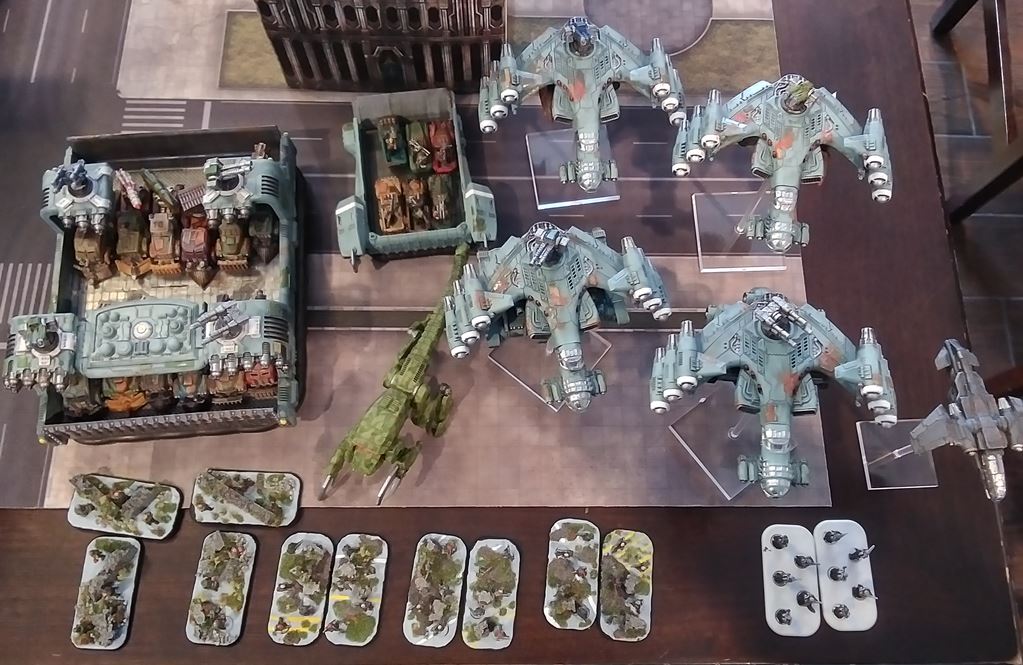 Slyphic: It's a demo scenario, Resistance bread'n'butter. Still limiting myself to units I've painted, so no bomb buses, but otherwise exactly what I wanted to bring to the table. I'm of half a mind to swap the Pizzaro for an Alexander, but I can't afford to fly it on without cutting out things I care more about, so once again the Pizzasaurus wins by virtue of being cheaper and not slow as shit. Also taking just enough infantry to at least make my opponents work for the bunker points. 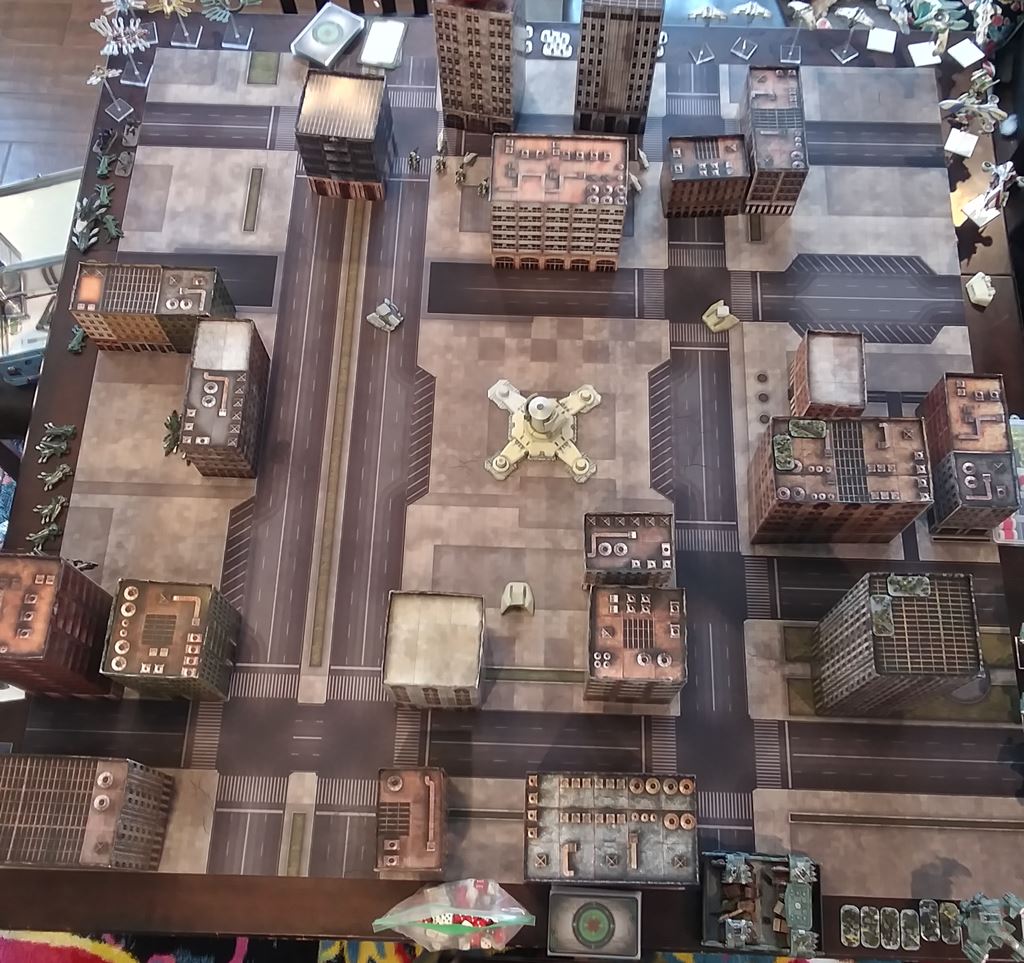 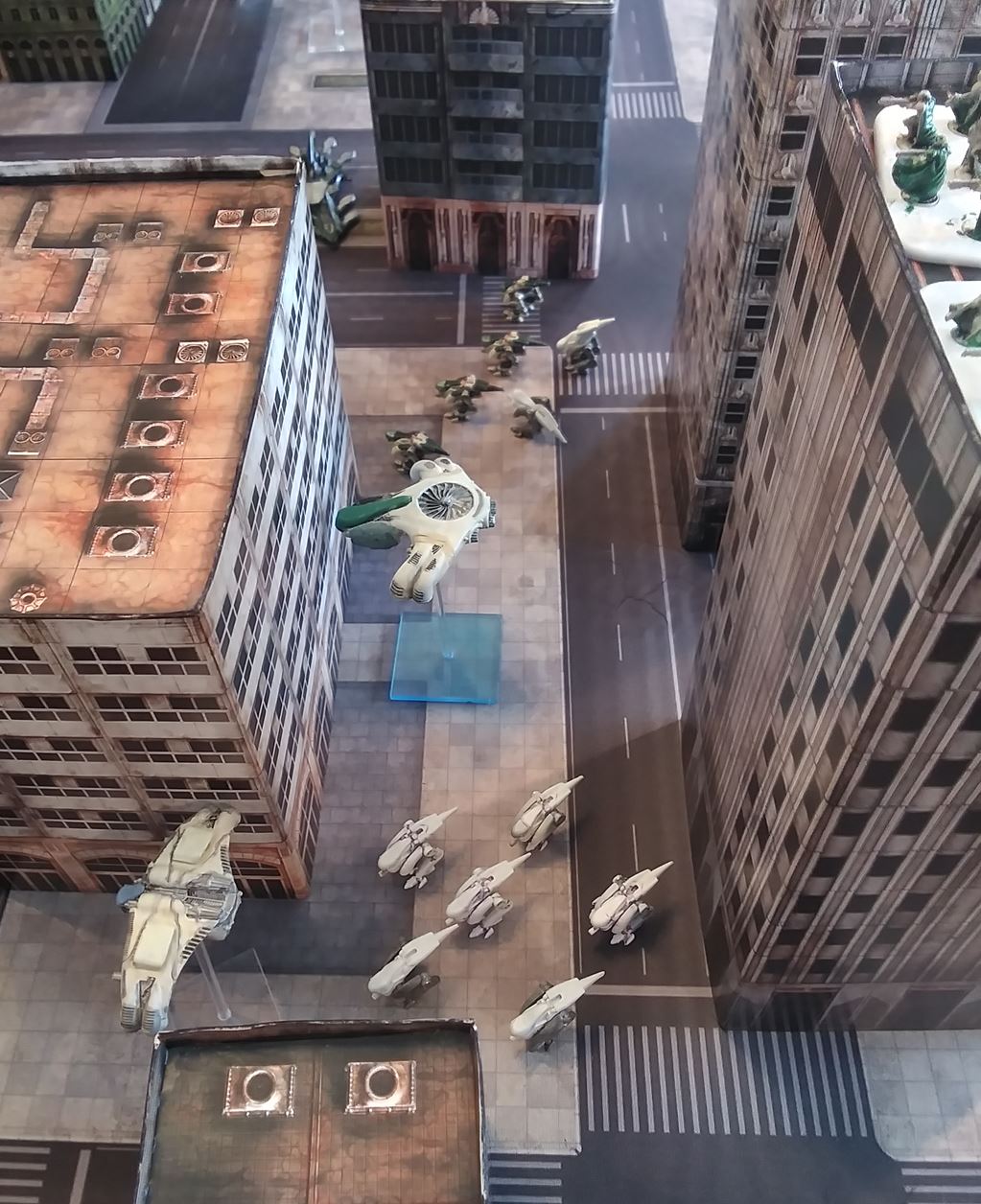 PHR set down a firebse early on, the Proteus screened by buildings, the whole overwatched by A-M Rifle packing Longreach Snipers. 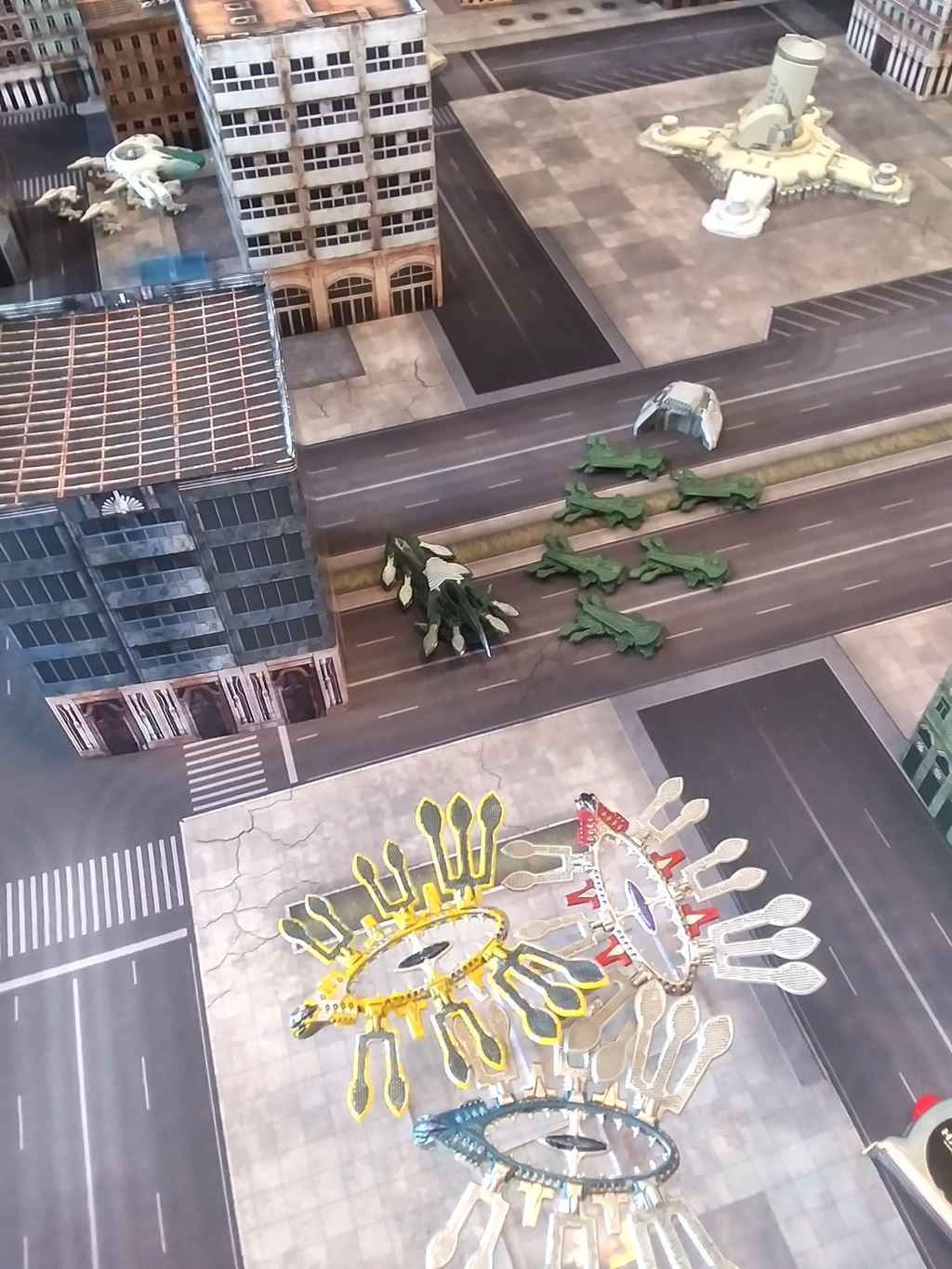 Here you can see two common Shaltari formations, the mass gauss fire grav-tank echelon, and the 'storm cloud' of gates that defy you to fly anywhere near them. The cloud will go on to envelope and egulf and zap-zap choice units. 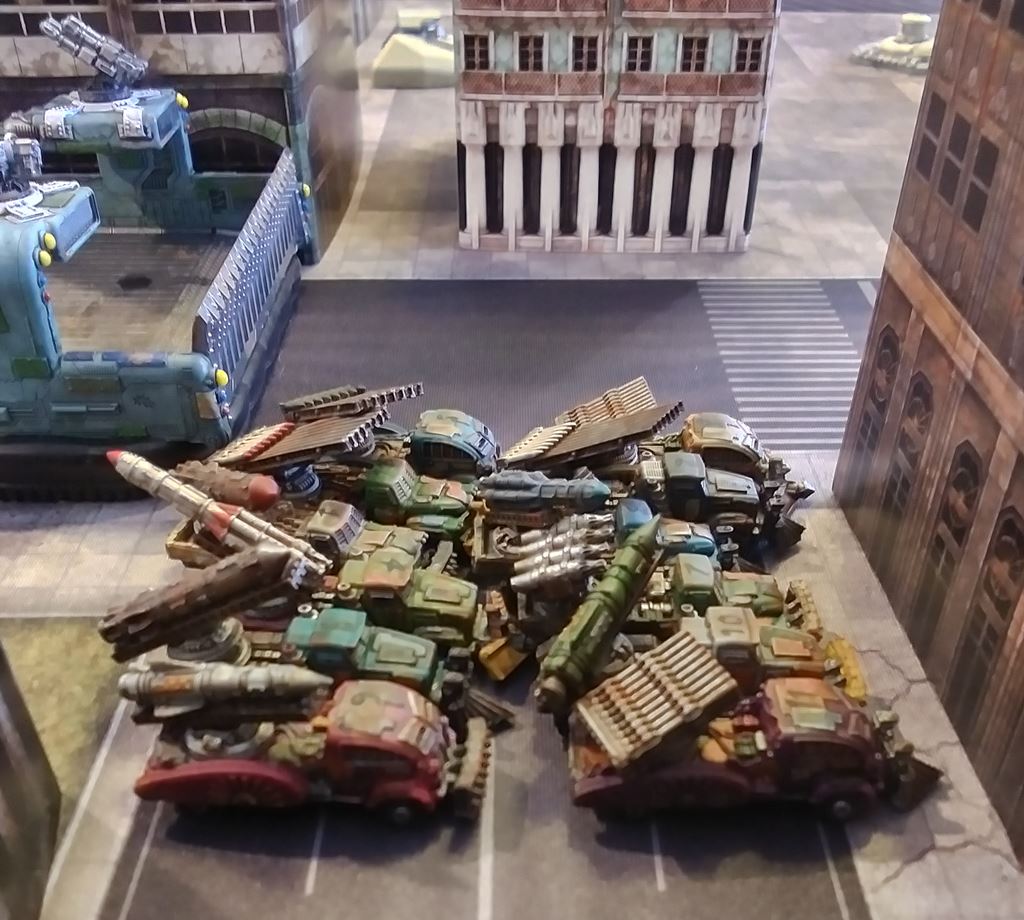 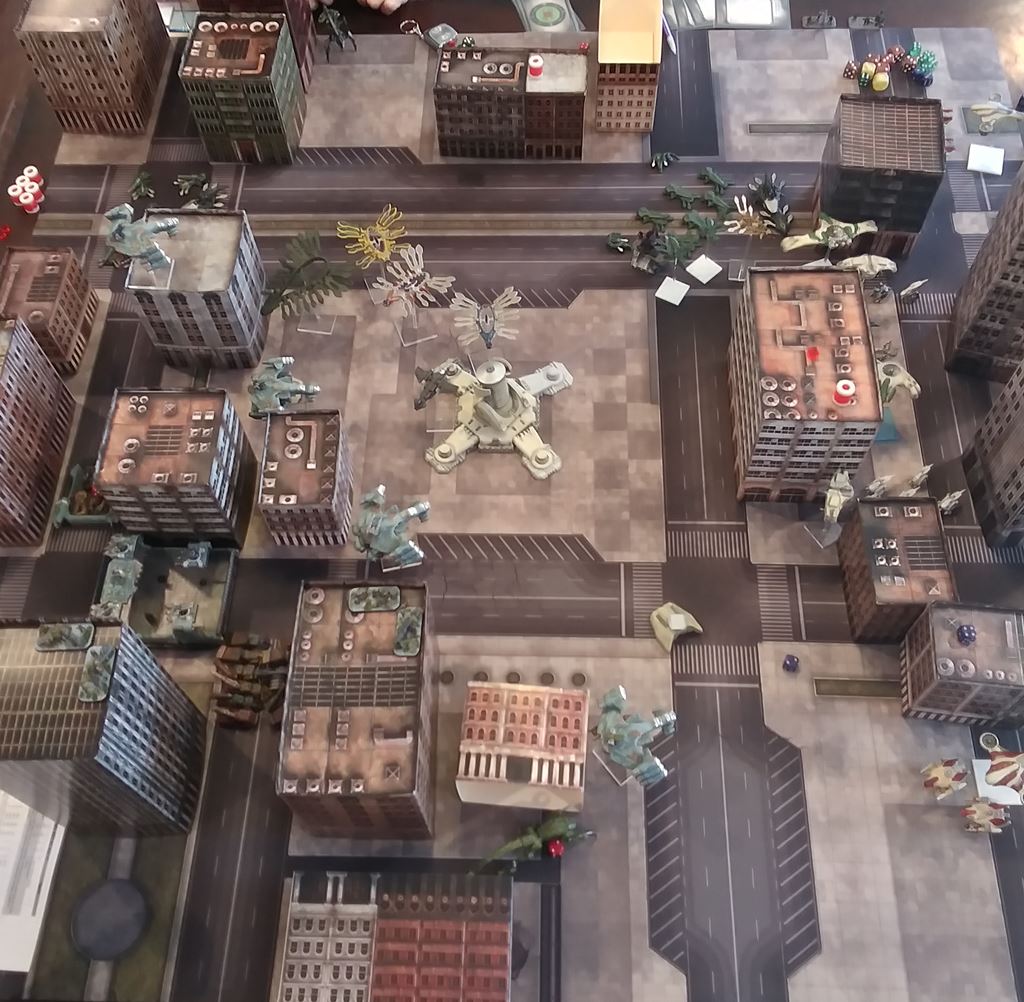 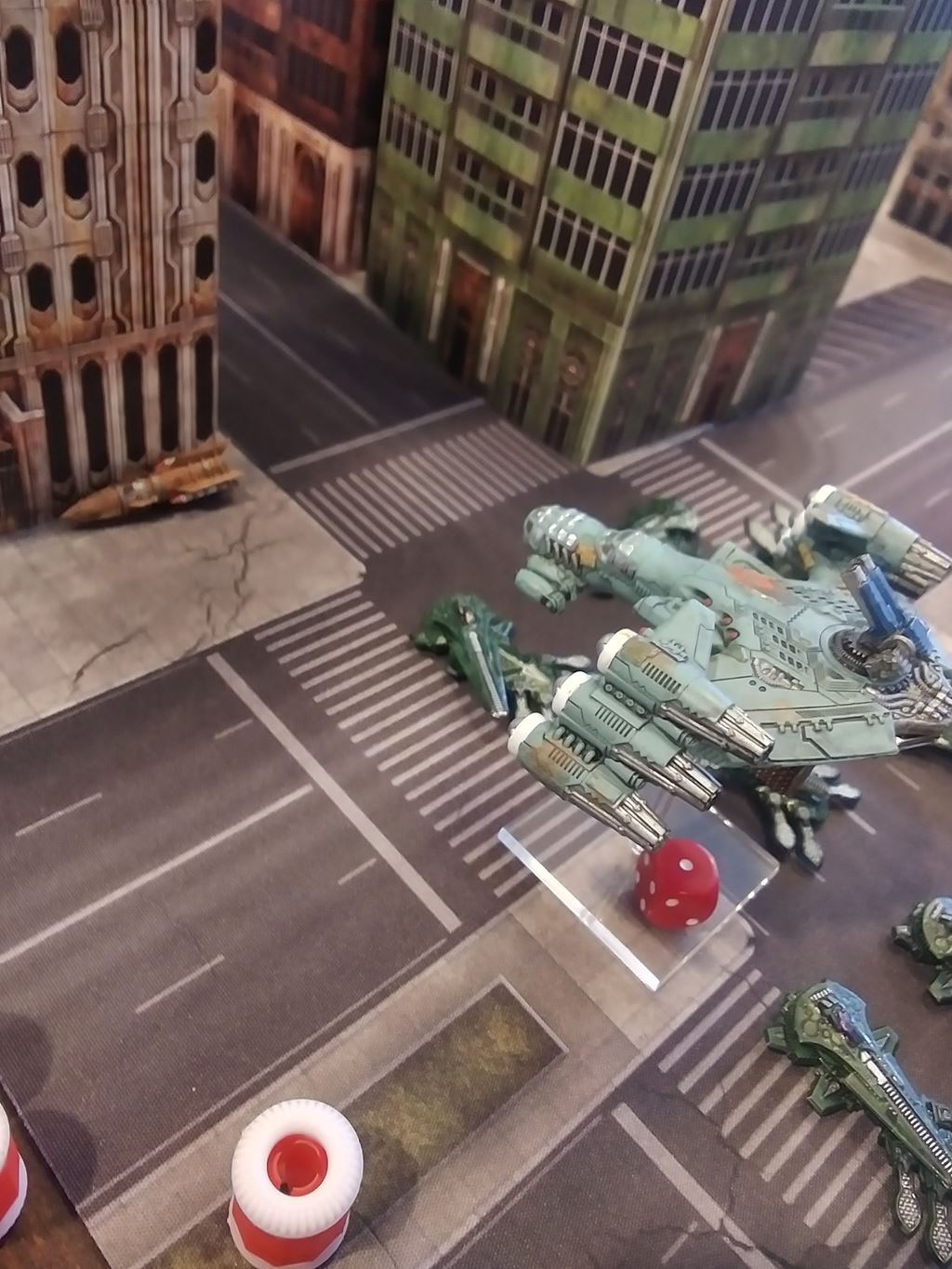 The most disappointing roll of the game. The Barrel Bomber Goliath bomb rolls a 1 to-hit and clunks into the side of the building doing literally nothing, despite flying through a tempest of Shaltari Gate Interference AA Reaction Fire. 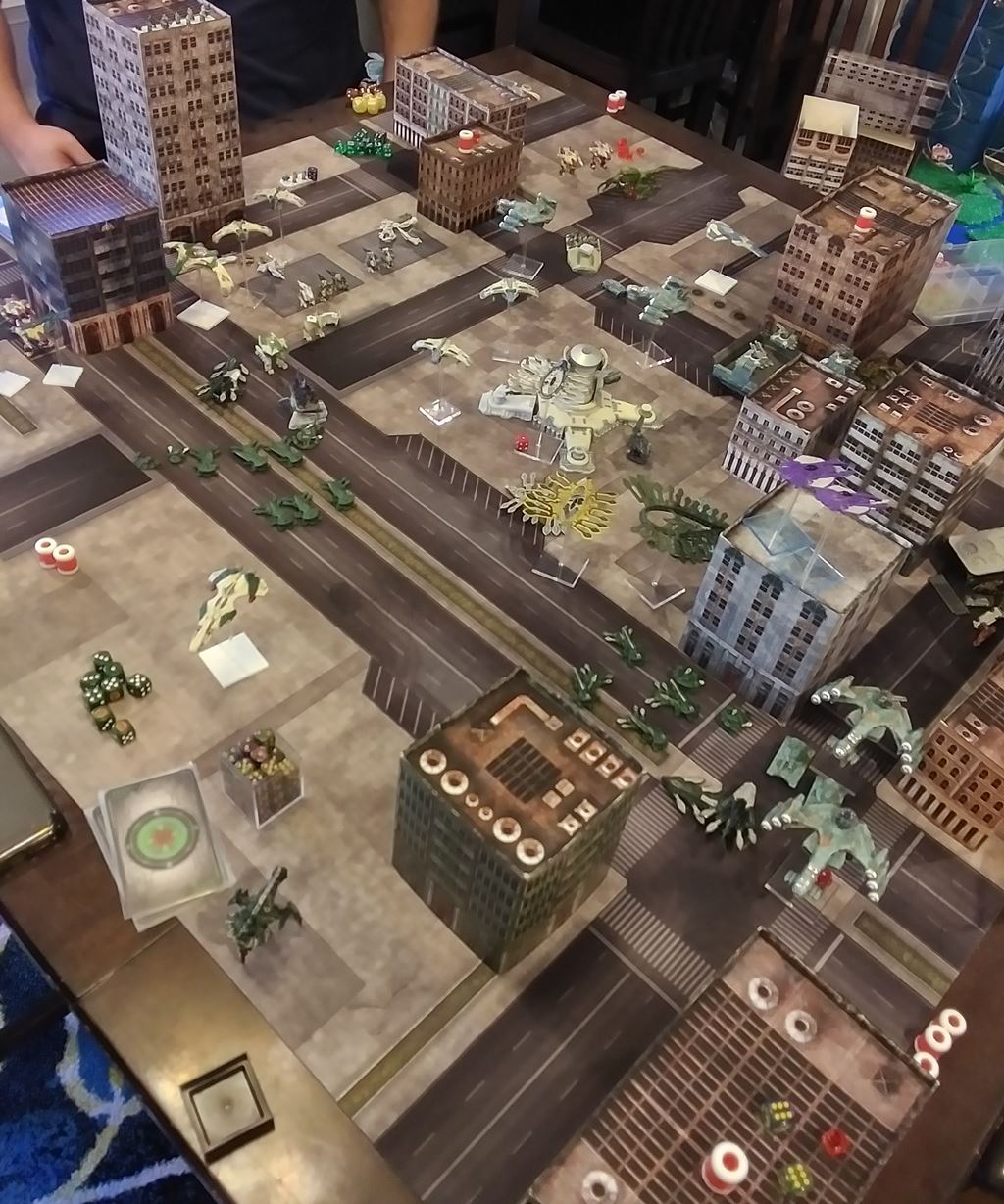 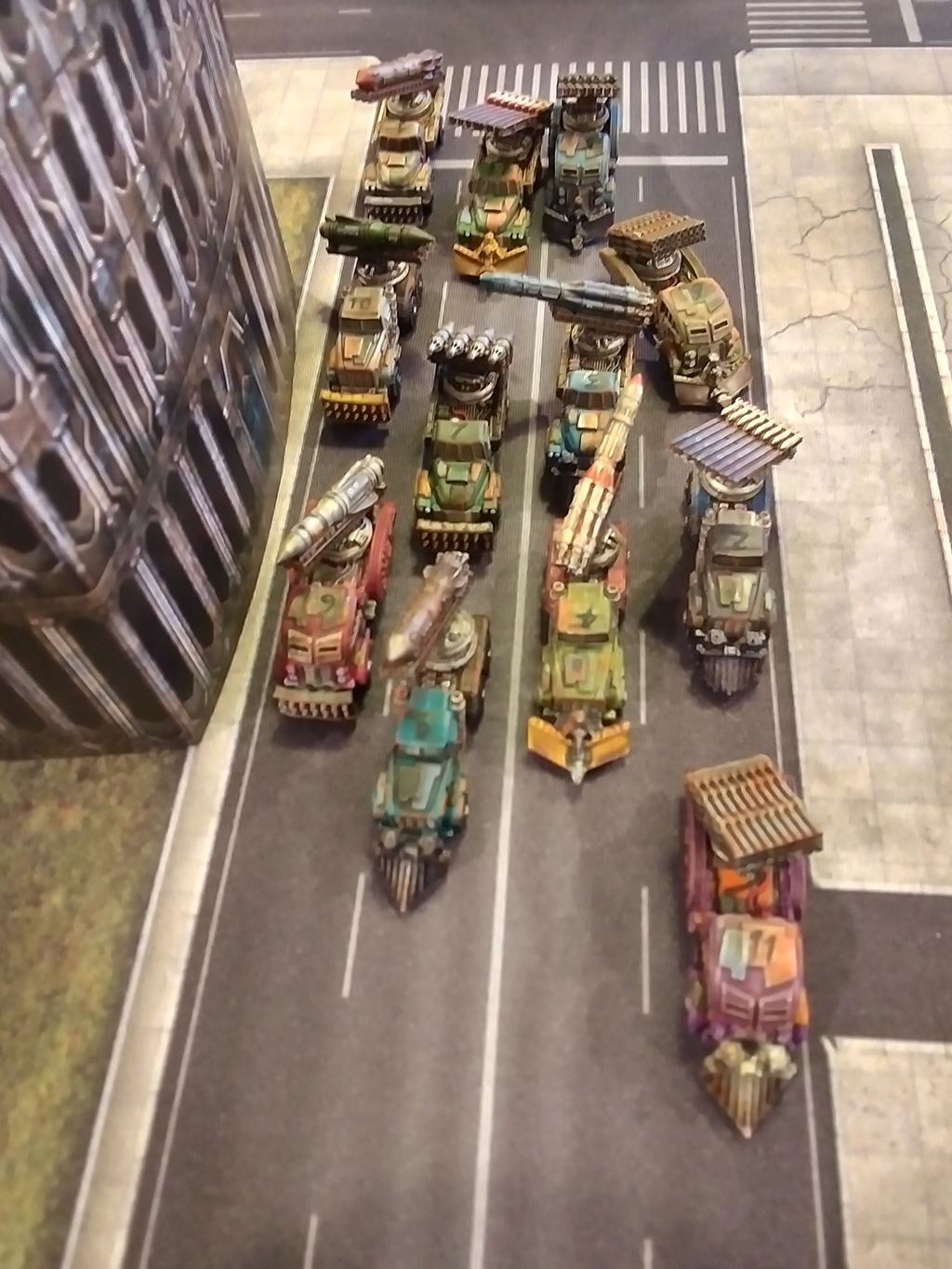 The Storm Wagons having fired their single missle become traffic as they slowly drive off the board. At least they downed the PHR screening building, and one of their towers. 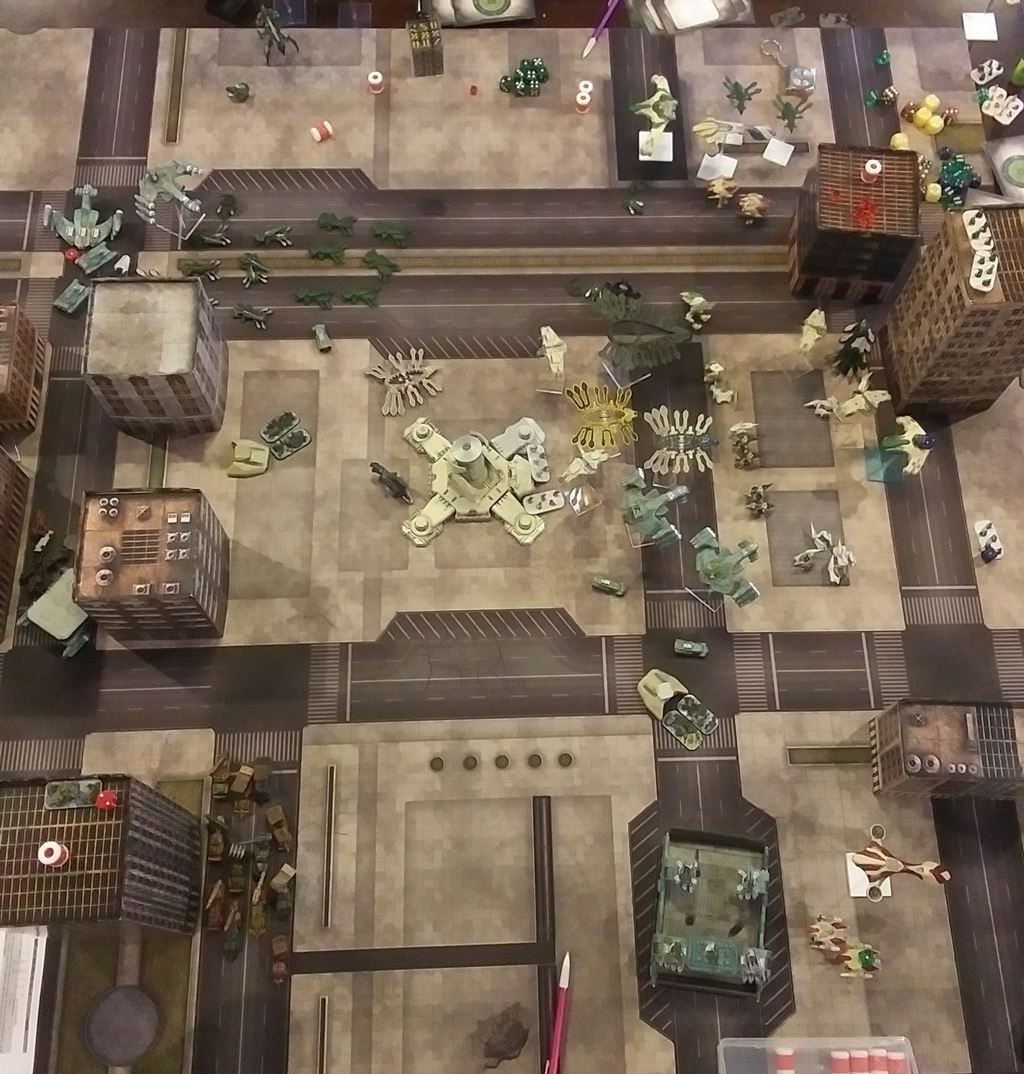 By end of game, the board was a barren wasteland. We really need rubble markers or tokens or something. It's on the to-do list, since the glowing vehicle wreck marker was largely a bust.

Ty: Math whizzes among you will note that I am a good deal short of the point limit for this game. This was not intentional, I just got to the game venue and realized I had forgotten 2 Enyos which were intended to deploy with the HQ Battlegroup. I added some Commander levels to try to offset this, but the lack of PHR firepower was definitely felt throughout the game.

The principle going into the scenario was to calculate units which had the highest average Damage Per Points (DPP) spent when compared to a Armor 10 building. PHR units are, without exception, the most expensive in the game on the whole, so I felt I needed to be as efficient as possible. Certain units (Enyo and Athena) scored high as expected. Others (looking at you, Janus) were surprises.

Slyphic: Even when the dice are against them, the Resistance excels at demolition. It's a little sad how lackluster other armies dedicated demo units are compared to conventional weaponry, and an aspect of the game I find TTC has sadly fouled up in DZC 2e. Also, Collateral is still a great deal of faffing about for very little effect. I learned nothing new from this game, and the only move I'd perhaps make differently would be to better consider the matchup of MFR vets to Immortals which were slaughtered to a stand in a single volley, and if I had them painted bomb buses would have been an interesting addition.