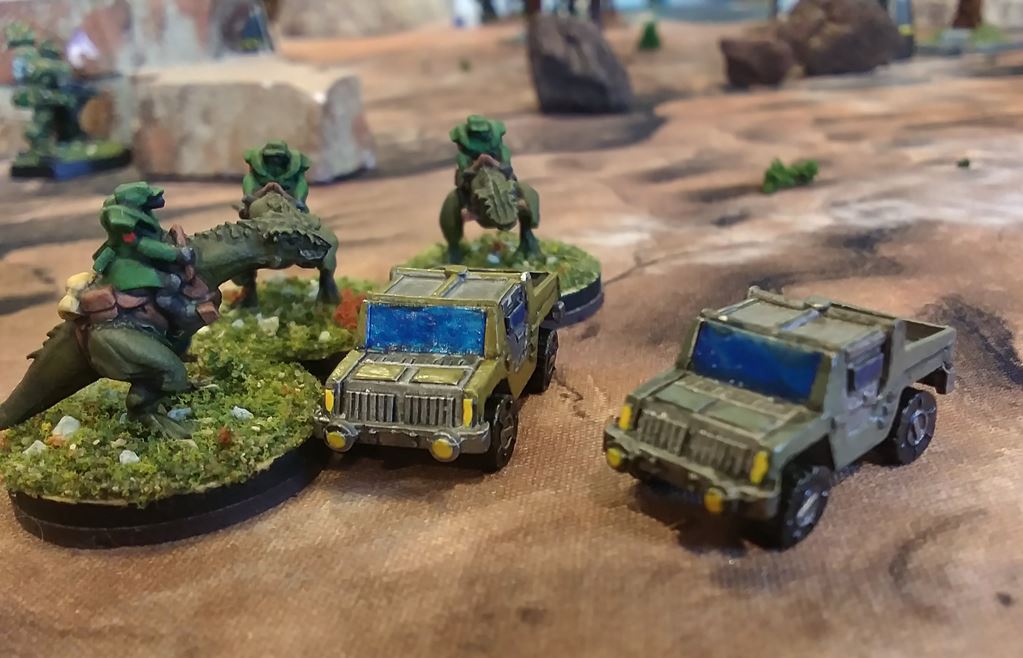 Tree and I met up for some games for the first time in months due to holidays and illnesses and other such bothersome stuff. We were both a smidgen rusty, but I had some new terrain and gears I wanted to field and I also suggested we bump up the size from our usual 125 to 150.

While setting up we realized neither of us had a copy of objectives to hand, and we can never clearly remember even when playing more often. BUT, I had a print copy of the rules we could use from the last eBay lot I bought, though I knew it wasn't the most current rules. Turns out, it's far older than I thought. Blitz v2.0, circa 2016. And those scenarios and objectives are quite a bit different to what we'd played so far.

We decided to roll with it, see what's the worst that could happen? 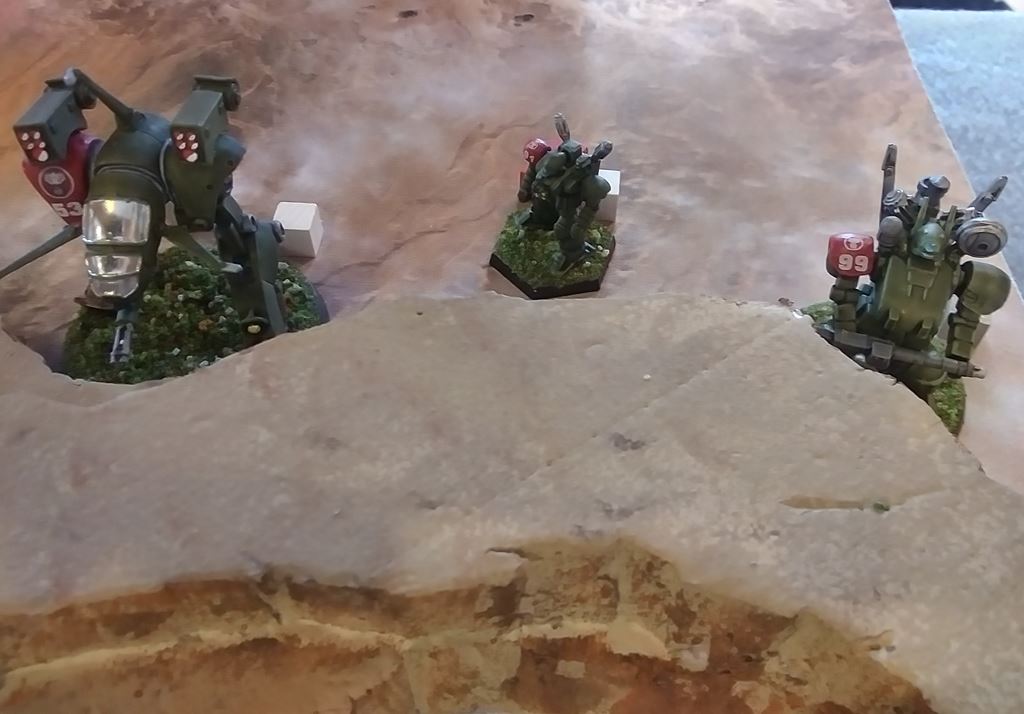 3 powerful indirect shots, counterbattery systems, and ECM coverage with a target designator. These guys stay in the back lobbing shots at hard targets with guided anti-tank missiles or clusterfucks with the pieplate templated medium field mortar. 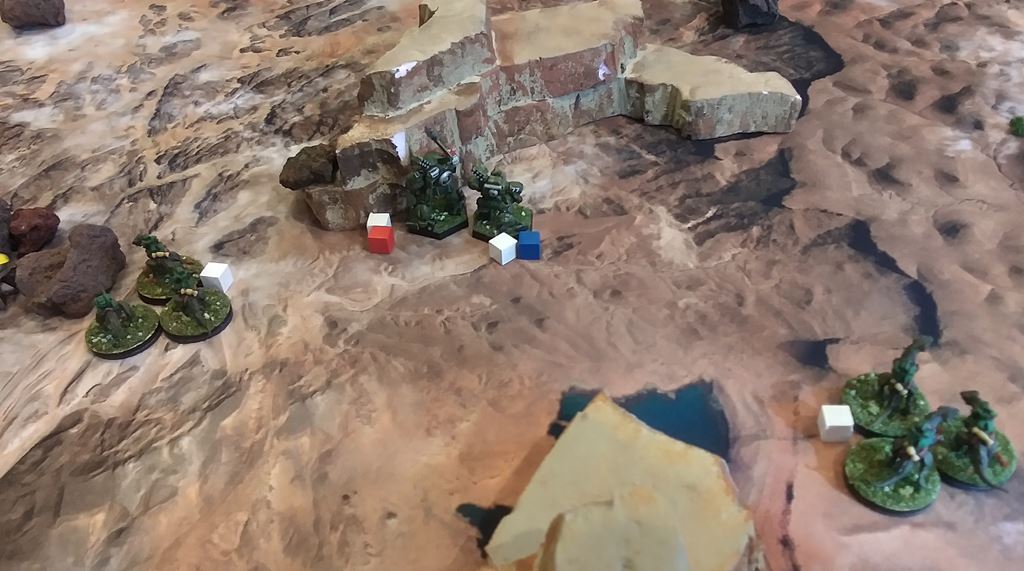 Objective takers. The lizards can go fast and hopefully stay out of sight, the Chameleon can rely on its stealth systems to similarly duck and hide, and the Silverscale uses its sensor boom to designate targets for the fire support group from safe cover. These guys will be avoiding combat if at all possible.

The meat of the force, we have mid range heavy hitters with decent mobility. The rotary lasers and heavy SMG are flexible weapons for fast moving targets or the lower end of heavy armor, and there's medium rocket packs for armor piercing desperation. The Flame Cobra is the star here, what with the Fire:4 heavy flamer. I've upgraded it with Precise, the pilot with a skill point for rerolling, and he can use the React+ action for 'Focus'. He's going to be the one cracking the hard nuts. 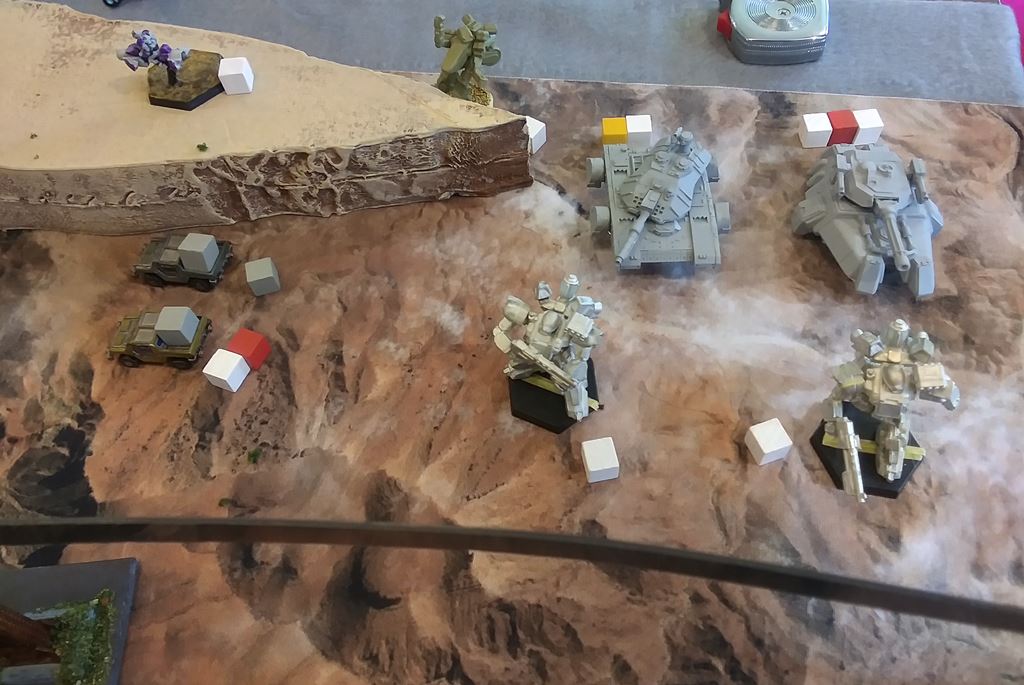 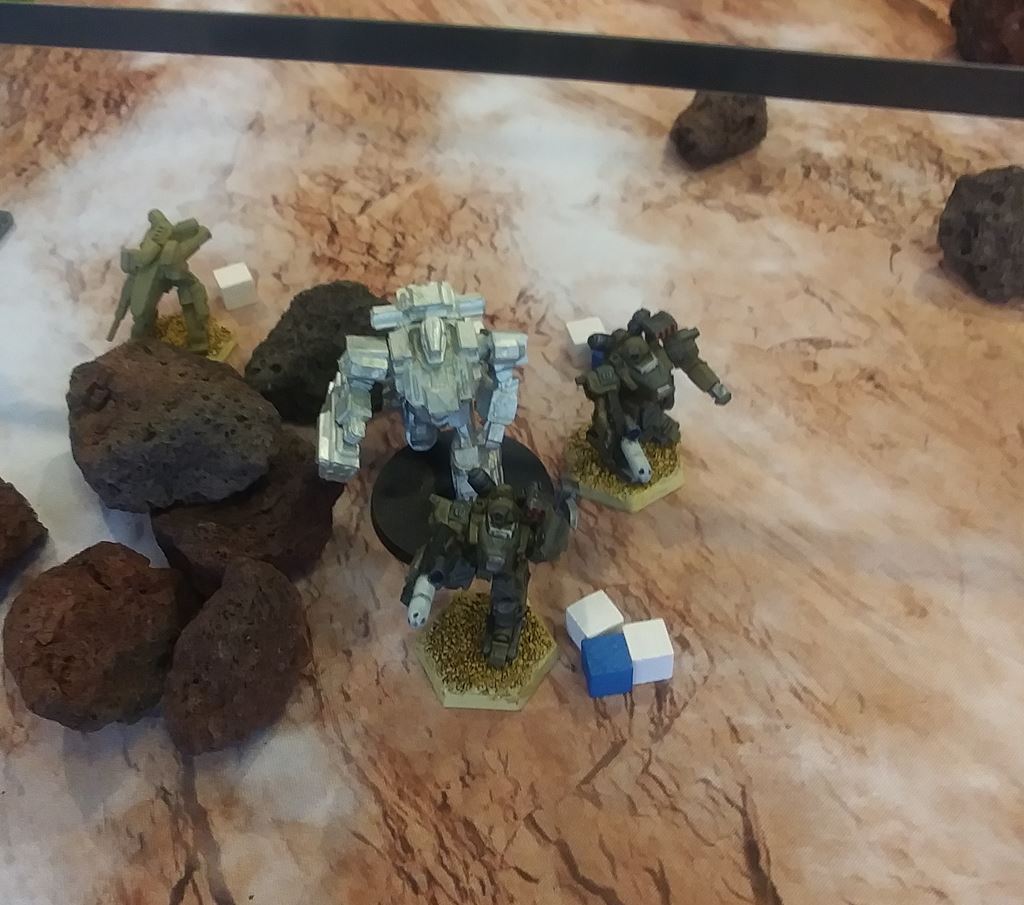 Like I said, we used the blitz v2 scenario rules, for shits and giggles and expediency, where they made sense with blitz 3.1 mechanics.

Divide the board (4'x4') into ninths, pick a corner and it's opposite, alternate deploying combat groups into them. Opponent takes the other corners and does like wise.

This was the first major spanner in my plans. This deployment meant there was no clear safe 'backboard' to hide my Fire Support group behind.

LoS reduced to a maximum of 18", all models have light cover from non-melee attacks.

I got Hold, Capture, and Assassinate. This worked out to needing to push NuCoal out of the center of the board while moving my own units there, and to try to take out his Arbelestier.

Tree got Assassinate, Break the Line, and Recon. Which meant he needed to kill my BB Iguana, move into my deployment corner, and Detailed Scan a couple of my units. 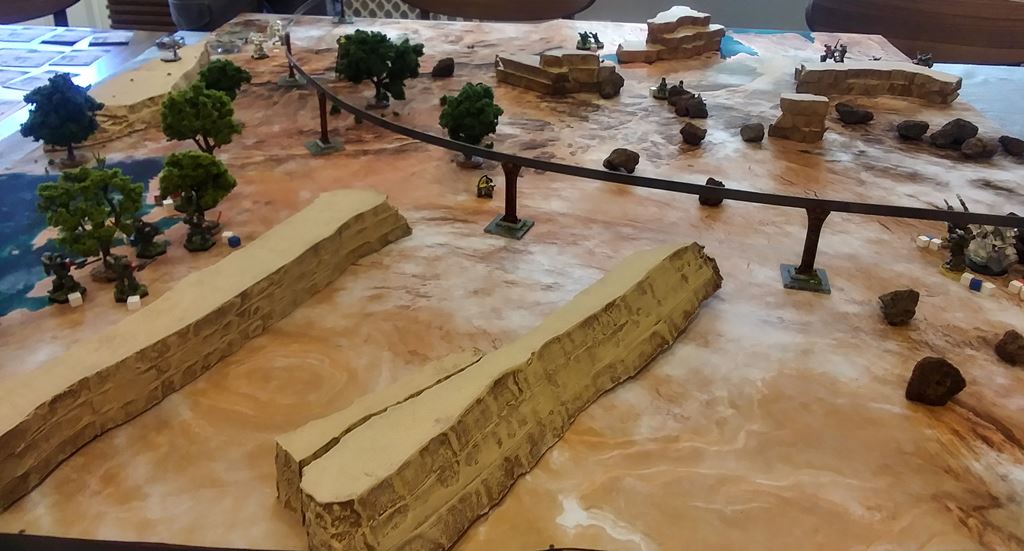 There was really nowhere to hide, assuming you can move fast. Which is kinda NuCoals primary identity. I made an early stumble by gambling on superior initiative rolls by positioning my reecon group forwards of the rest of my units. 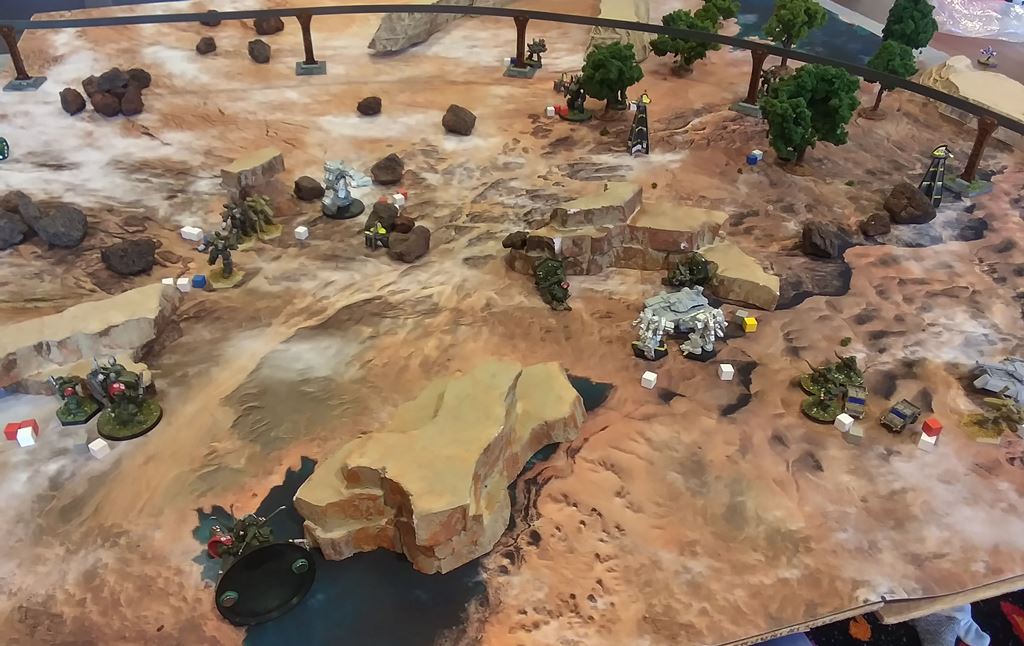 NuCoal won the initiative, and moved full speed right on top of my recon group, blasting them at point blank range. I lost a lizard team right off the bat, obliterated by one of the GREL Raider Antelope Technicals. The other Technical crippled my Chameleon. (I dodged instead of retaliated, and it didn't work out). Artillery Cobra and Naga missed opening shots on the Arbelestier. Duelist Jannite Curiassier Lance HACs and the Arbalestier's HRP pummeled my Naga to the ground. My Strike team was barely able to get in sight range going Top Speed due to the heavy fog we rolled. Rotary Lasers and HSMGs threw a lot of dice, and did a few boxes of trivial damage, with nothing decisive happened.

The big picture was NuCoal moving fast enough to concentrate force while flanking my non-frontline group. Defeat in detail. 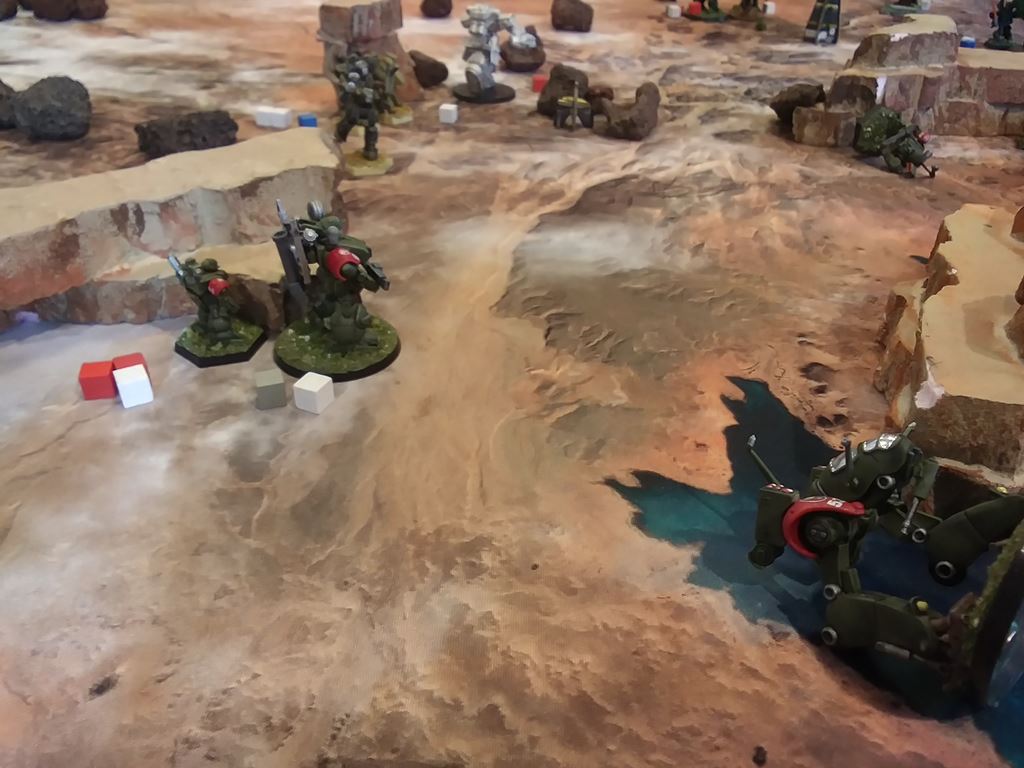 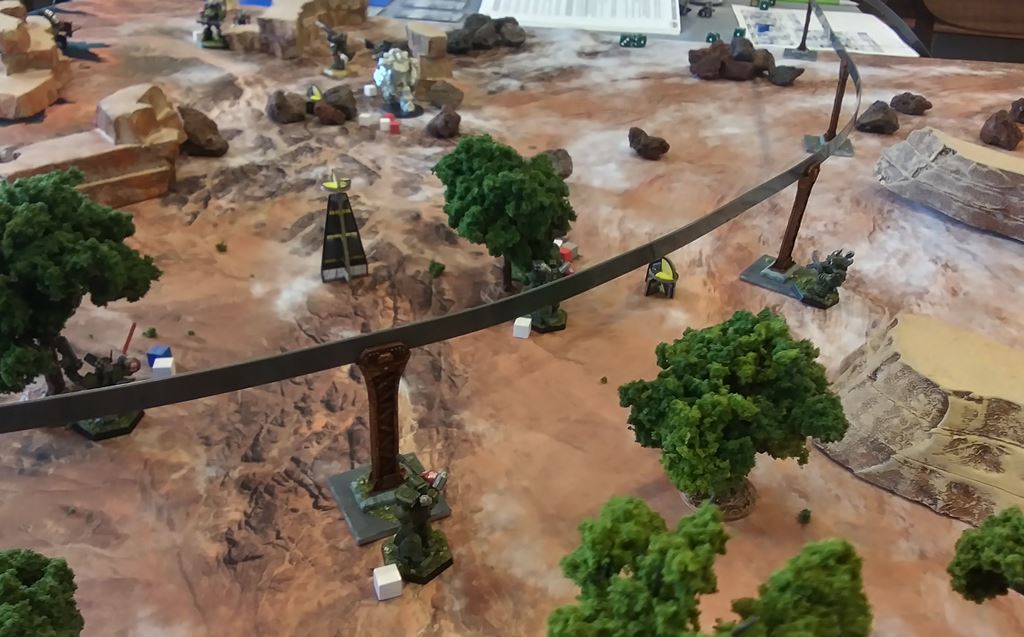 My pictures from this point on were embarassingly bad. Turn 2 had no major swings to it, but lots of misses.

Turn 3 I finally got initiative and made a few dents but few kills. I needed an upset and couldn't find one. The Flame Cobra, despite Focusing a precise heavy flamer, only managed to cripple the Arbalestier, while the Mambas and Gilas largely failed to penetrate the hovertanks armor. Meanwhile, the GREL Technical raiders obliterated the Flame Cobra and a Gila.

Turn 4 I still couldn't down enough units to control my objectives, and the Arbalestier was still up, so I conceded the fight.

GREL Technical Raiders were the MVPs. Hard to hit and hard hitting, they punch FAR above their weight while moving extremely far. 'Technicals' feels like an edge case in the rules, much like I see people talking about GREL hoverbikes in the last revision. I also maintain that removing the infantry damage cap from cavalry was a mistake, as my lizards evaporate when hit by seemingly anything.

If I had won first initiative, I might have been able to move the central fight to more favorable ground. But jump jets and jet packs would have probably countered that. I hate to blame luck, but basically nothing broke my way and I was fighting uphill from deployment through complete defeat. Tree failed to make any blunders I could take advantage of either, which is to be commended. Competence leaves few flaws to exploit.