There have been a couple games before this with some fairly significant mistakes, but this time the mechanics were nearly all correct, even if the use of them was still a bit inept. Also, the dice were awful this game, rerolling into even worse outcomes, or just straight up rolling trip-ones.

The Dropzone urban board is back, though I switched out the DeepCut mat for the good TableWar one, just to mix things up a little. The elevated tracks still need painted, and if you squint you can make out a few trees I'm happy with off in a corner. I know, I know, it needs more scatter terrain, I'm working on it.

Tree: The aim of this game was to get in a test run of infantry and a VTOL unit. I built out an infantry only unit to take advantage of the Temple Heights local militia rule, but I decided to use the SO designation for the assassination objective after I constructed the rest of my list, so it rendered the special rule redundant. The FS group started with the Varis and built out from there. I added a Jerboa flash as it is just a great work horse gear. Priced well to place a commander in with a good EW trait that also benefits its long sensor range and target designator. Its high speed and jetpack 6 means that it would be able to get into position to direct fire or into cover if need be. The ECM+ would benefit its escorts so I decide the rest of the CG should be built to cover mid and close-range threats.

Slyphic: I'm struggling to figure out how to use Lizard Riders effectively. They need rear charges to be reliable in melee against all but the most febrile of gears, and their weapons are mostly plinky single damage results. So they're coming along in a Recon Conscripts combat group yet again, until I unlock their secret stratagems.

The General Purpose group of Jagers and the Blackbox Iguana is exactly what they sound like, generalists with an ECM+ blanket.

The Fire Support group is a Medium Anti-Tank Missile platform, solely there to launch guided munitions down on any target the other two groups can successful Forward Observe.

Objectives: Hold and Claim. My thought here was to hold back the Jagers for objective claiming, while indirectly popping advancing NuCoal units, with the lizards there to spoil any similar objective.

Disclaimer I think my camera phone is going bad, because every picture I took of this game was worse than the last.

The South deploys behind cover except for the Lizards who need to be as far up the table as possible, and not stuck behind a cliff they can't climb. While in the open, they have Smoke and the intent is to start out with Evade actions and cover via smoke. 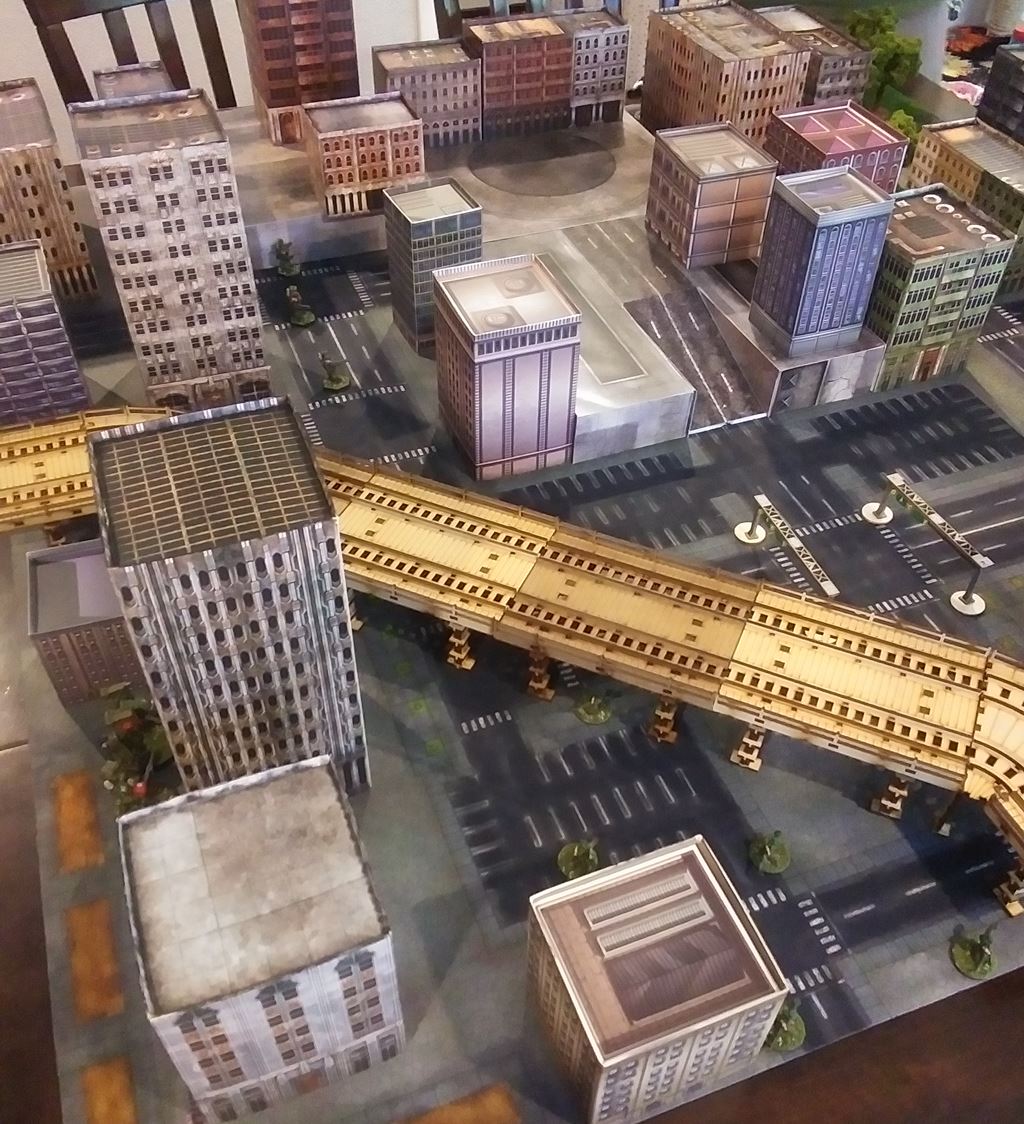 NuCoal splits the infantry across the board in the Spec Ops deployment pockets, which put them on top of buildings. The Fire Support group squares up across from the Southern GP Jager cadre. 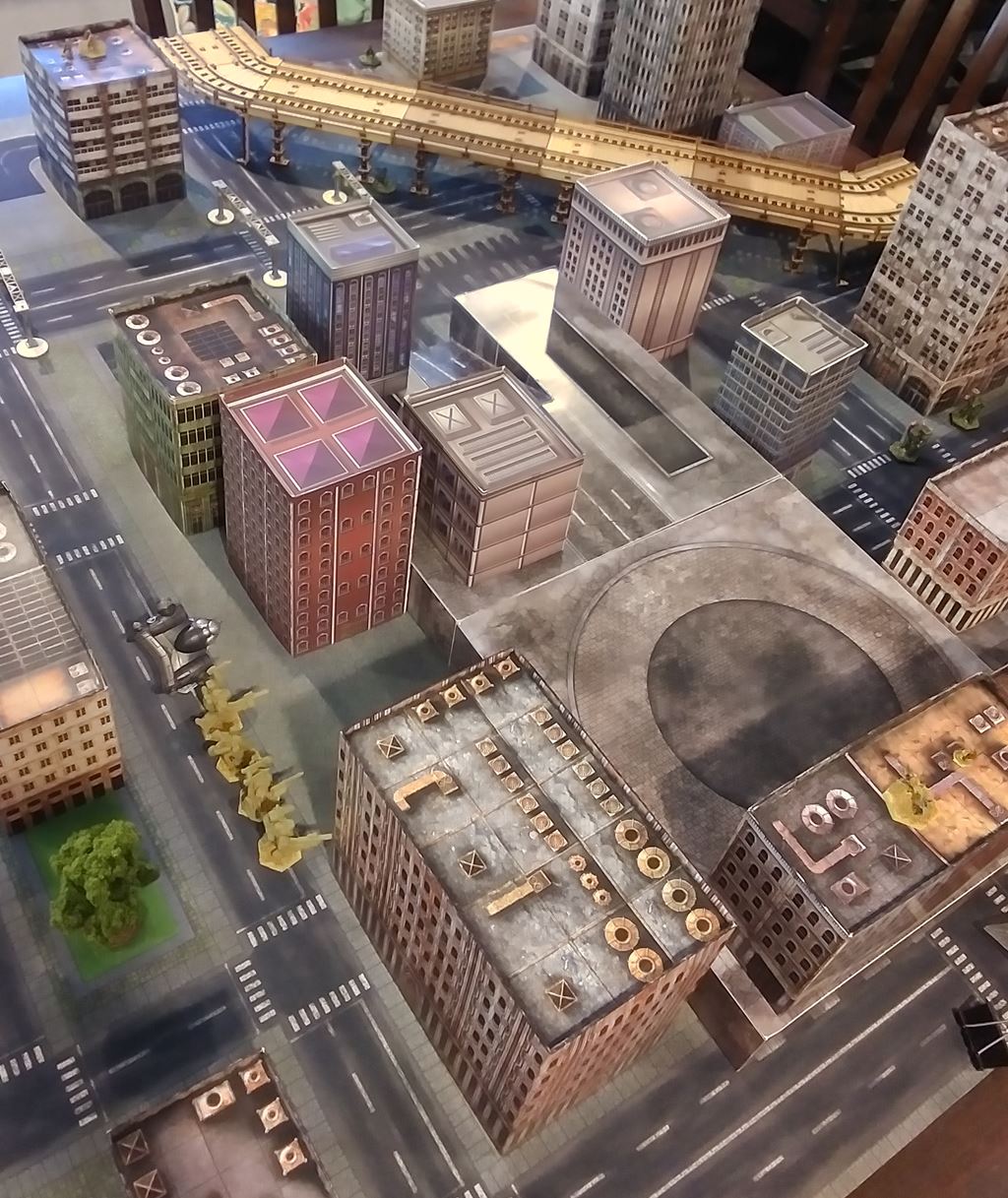 Smoke and juke'n'weaving doesn't count for much when you can bullseye a womp rat from your T-16 back home. 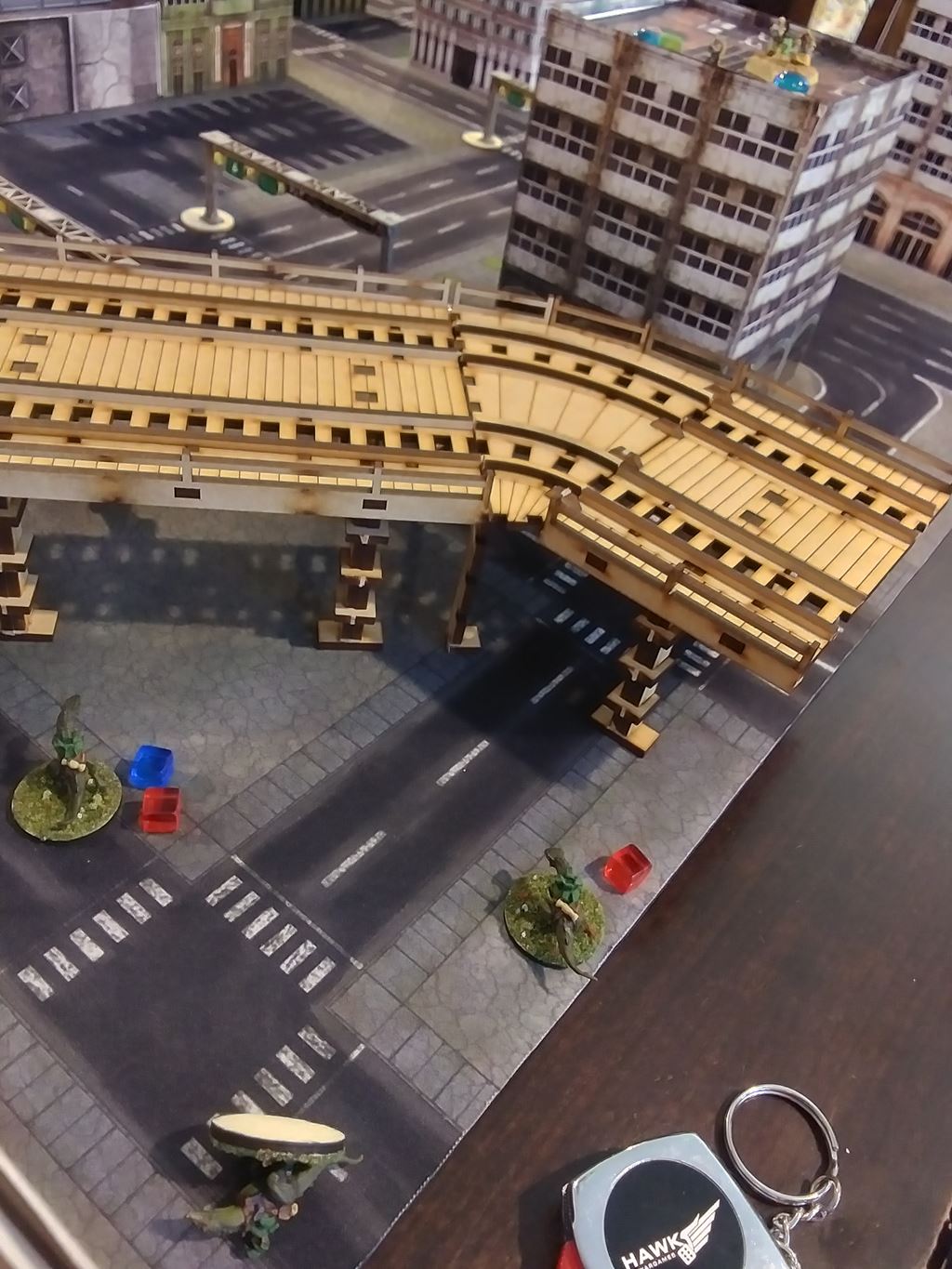 The Flame Jager attempts to light up the En-Koreshi but fails the to-hit roll. The rest of the squad advances but crouches behind the cover of a cliff edge plus another Smoke grenade, while the BB Iguana plays a round of Netrunner with the Jerboa. 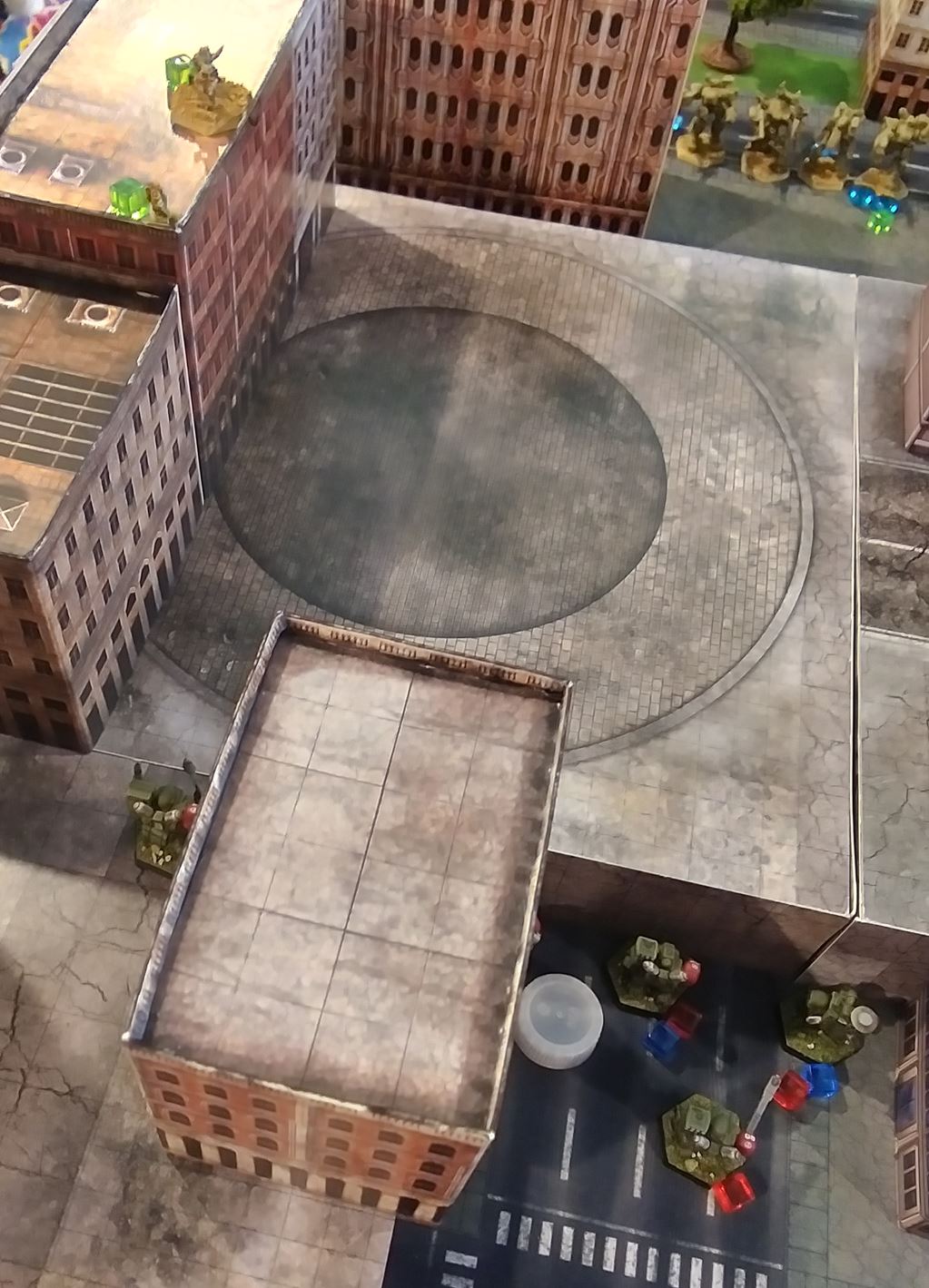 The Cobra moves up to try and pop the Sandriders on its side of the board with a guided mortar but fails. The Naga follows it, sensing the GP squad may soon be unable to relay FO signals. Meanwhile the Lizards are at full gallop hoping to get into rear arcs. 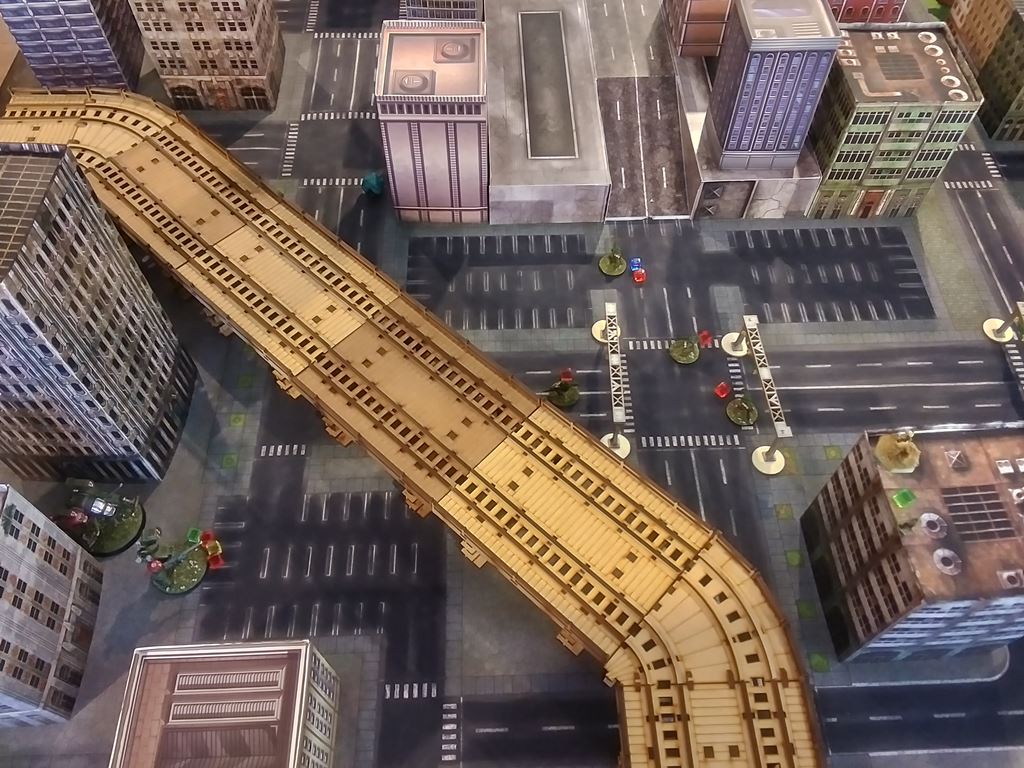 By the next turn, the FS gears have finished off all of the Jagers, though they've eaten a few missiles in exchange. The lizards are down to two models and though they're finally in position for effective rolls, they're conscripts without leaders so they're rolling against harder target numbers. The Naga radios to Gen-Comms "Switching to direct fire". Slightly out of frame, the last Lizard rider, some yokel on his only mount from the farm, whips out his hunting rifle and pings the Jerboa in the engine. 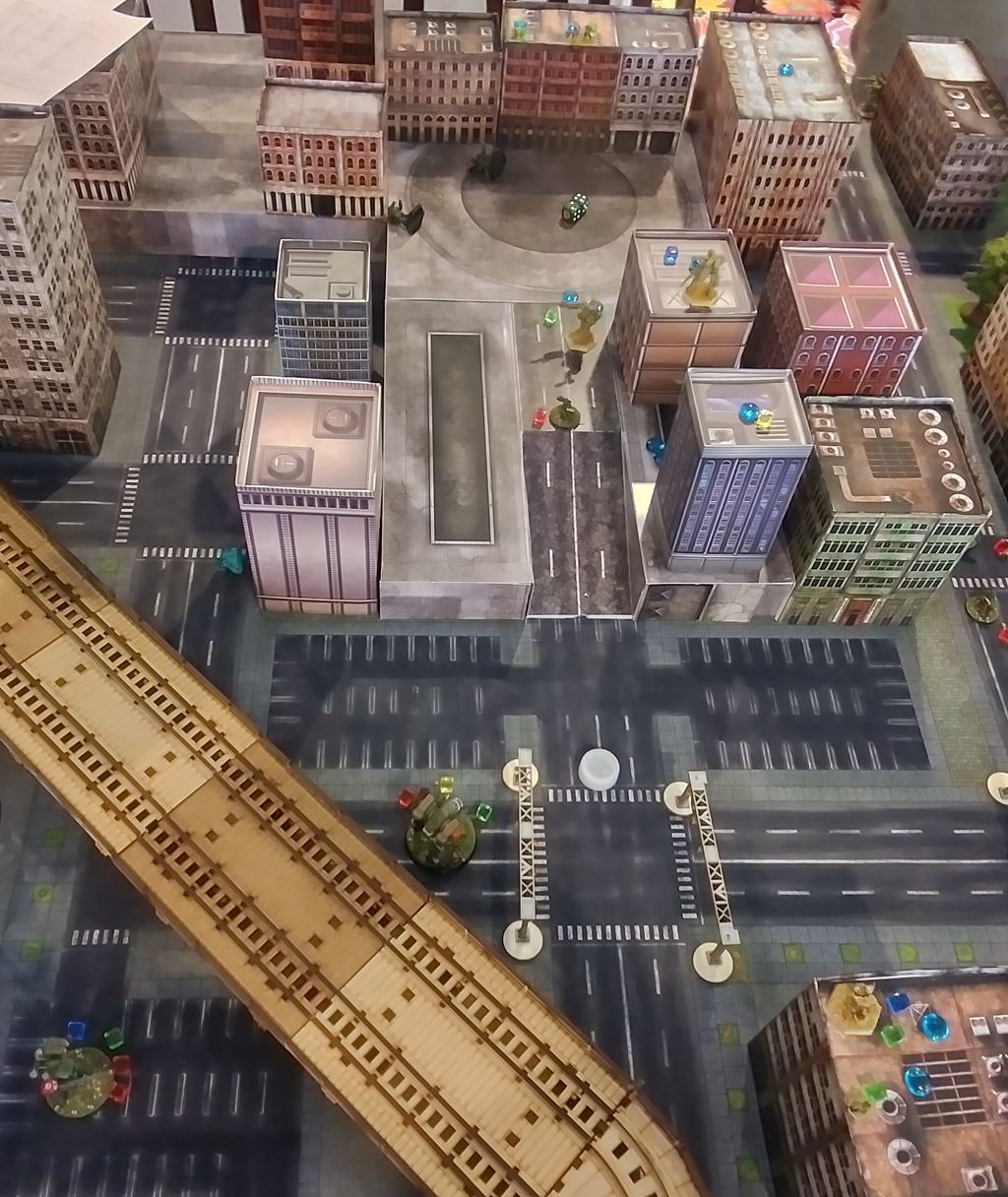 Despite absorbing 5 or 6 hits, the Naga finally goes down and the Cobra uses the wreck as cover to exchange fire with the remaining Cuirassier. The Jerboa, offended at the scratched paint from some Southern redneck, rotates and jumps down to go hand-to-claw with the lizard rider. And comes out the worse for the exchange, crippled and nearly dead. 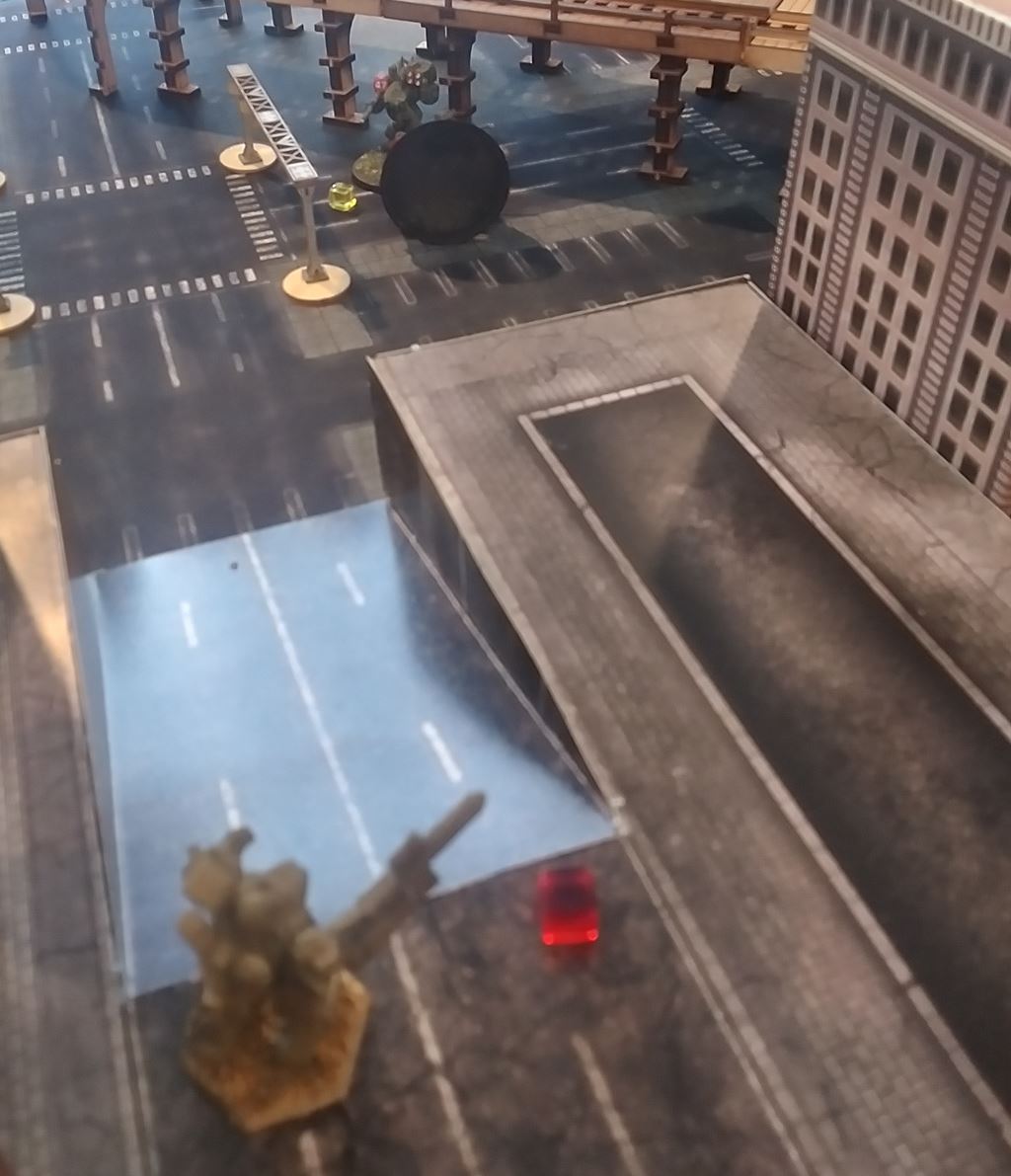 The game ends with the South unable to claim their objectives and NuCoal having racked up 2 for dead commanders and 2 for a thinned out FS group.

Slyphic: Fishing for FO rolls on a 5+ is not a good strategy. Cavalry that EVER exist outside of cover are as good as dead. Lizards are only really melee combat effective against the lightest of recon gears, but at the same time are going to struggle to ever get into melee range unless the recon gears make a mistake or get goaded into it.

Despite taking defensive objectives, the optimal play with them felt terribly non-interactive for a game with only 4 activations per model. I don't perceive winning as fun enough to play turtle; at least not with gears. An infantry company would be a different prospect.

The Naga's HMG is at odds with how I want to use the unit. I want to be able to fire both MATMs every turn, and if things have gotten so desperate it needs to activate the react weapons, I'm just rolling to determine how badly I've lost the game.

I've tried a few different variations of Southern chaff armies, and it's just not working. I need to either go more horde (extra Jagers and infantry should be arriving shortly) or I need to go more elite. Maybe something built around a ranged duelist King Cobra, since NuCoal struggled with the armor 9 of the Naga so much.

Tree: I was worried that dropping so many points into two gears would make them obvious targets, but the twin lances proved their worth and covered the FS group as a wave of Jagers crested a platform to perform FOs. My FS CG benefited from reaching the top of the platform first and from the Jerboa’s ability to get extra height and senorlocks on the Jager and Iguana squad while the enemy squad was blocked from doing the same by heavy cover. Once again, I was placed on the defensive as my NuCoal speed was used in round one, but my army was quickly hemmed in by the South’s numbers. I accepted in deployment that my roof infantry would be static, but I think one day my habit of staying defensive will punish me. I think forgoing camping hold objectives was the right call by the South and had even one or two dice rolls gone the other way the South would’ve taken the game. The short 4 turn limit really sunk in for me this game. In other games I tend to be more general in my turn planning, but I find the added urgency makes me really try to have no wasted action… which makes me only more ashamed that I forgot about ‘Focus’ and ‘Lead By Example’ all game. Every unit taken this game was a blast, expect to continue to see them.