I attended Millennium-Con in Round Rock Texas last weekend and played a wide variety of games I hadn't before, or in a great many year. I came away from each of them with some thoughts on game design in general, and how they relate to the state and future of the Drop games. 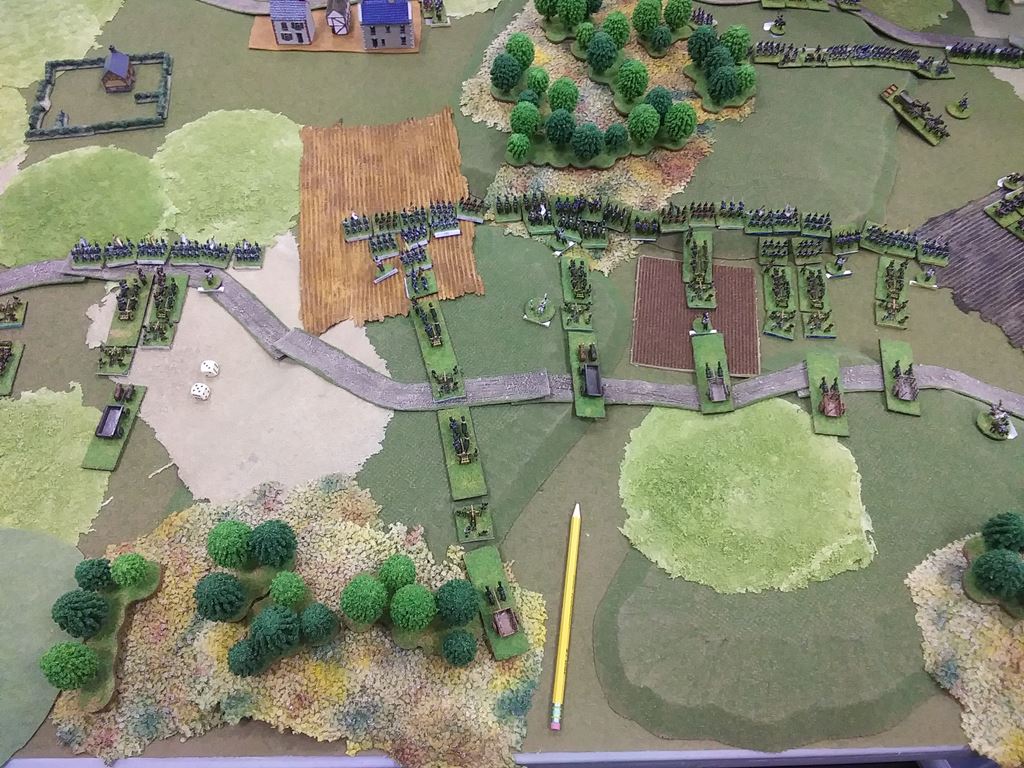 I loved the first 2 of 4 hours of this game. It has a great system for issuing and resolving commands that gives you the feel of organizing such large armies with little more than voice and paper and horse and flag. Friction without feeling arbitrary. And logistics! I really enjoyed the maneuver period, the skirmishing fire, the falling back and rallying... and then we made CQ contact and the game ground to a halt in minutiae and pointless busy work.

I've never changed opinion about a game as suddenly and radically as with ESR. It was like watching the game designer suddenly whip out a pair of bridge-taped glasses and pocket protector and drawl 'well, achsually...'. It went modern to full-grog on a dime.

To be more specific, the skirmish phase had you lined up and deployed into battle formation, and you resolved fire unit vs unit, mostly to determine whether a section fell back or was broken, but the lines held. Come CQ contact, you assign and evaluate each and every unit vs its counterpart, resolve the combat for each unit with roll and table, resolve a morale check for each unit with roll and table and careful repositioning of the unit in 1 of ~6 states, AND THEN you roll morale and disposition for the entire company and if you fail, all that careful positioning and unit state doesn't matter as the entire force falls back in a route. It's completely backwards. If the force is going to route, the rest of the fiddling doesn't matter at all.

The game temporarily forgets its scale and purpose.

It's DFC ground combat but worse, focusing on the faulty premise that resolving combat is actually interesting. Decisions are interesting, time spent resolving decisions is busy work to distract you from how few actual decisions a given game may have, boring bookkeeping to be kept to a minimum.

Based on their wild west gunfighter ruleset, fleet scale, this particular game was played with Star Citizen ships 3D printed for the occassion. 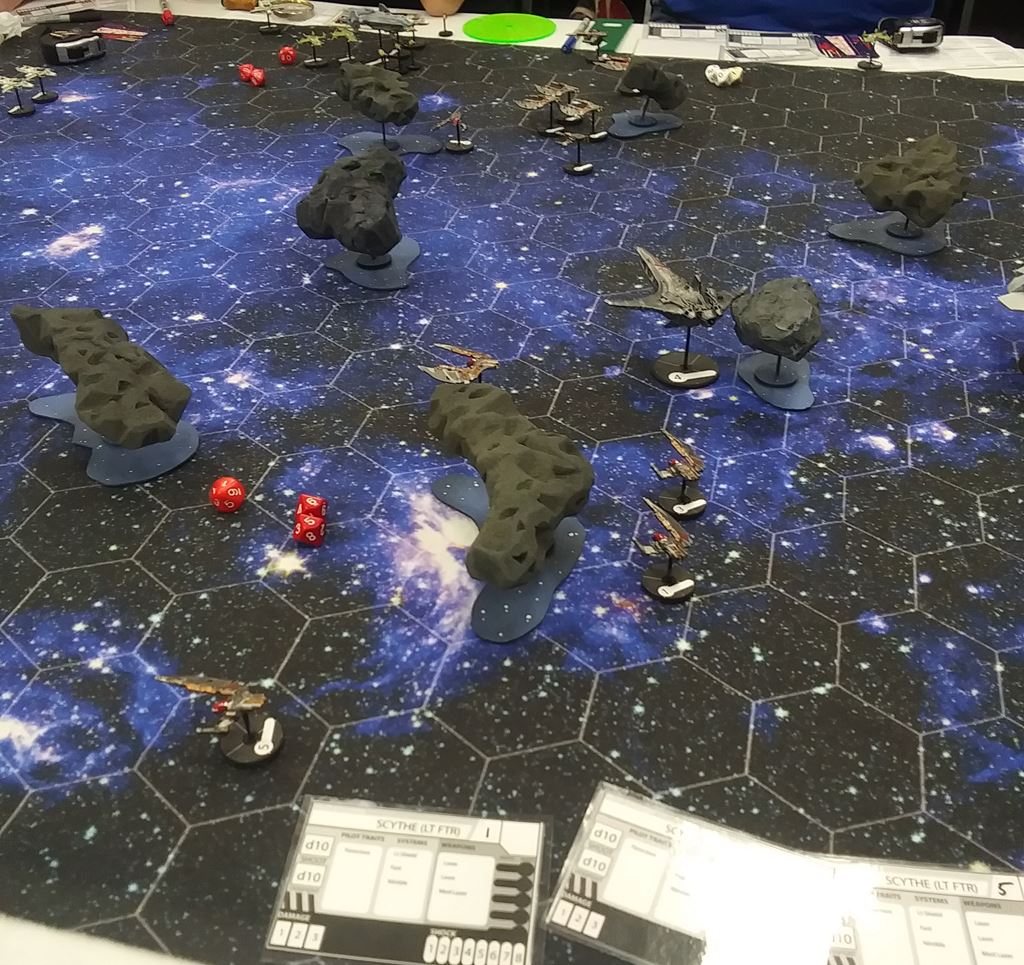 With 8 players taking turns to one-at-a-time activate ~25 ships, even with opposed roles, there was a lot of down time. The game has every player draw a card per ship from a typical 52 card poker deck and activate in suit & value order, but also some of the face cards have special abilities.

The game was functional, but nothing like a coordinated strategy was possible. You had no real idea when you'd activate, so planning ahead wasn't possible, it was always just responding to what you saw on the board at the time. Without the ability to coordinate between units, it was a lot of noise for little meaningful strategy. It was basically just target selection within range, repeated. In a non-Con format, 2-4 players maybe, with each person better able to activate units meaningfully, it would have been more interesting.

It gave me a better appreciation for the organization by battlegroup, a middle ground between every unit individually vs I-GO-U-GO full armies.

Also, play to a unit's strength rather than the table state when you can't pull off a coordinated turn, else you're all footwork, no punches.

The venerable classic from 1977, ~6mm scale, but multiple units per hex so kind of scale indifferent. This one was scaled up massively with a wonderful collection of different and obscure models from the game's history. And a scenario that's seen play at a decent number of conventions and stores over the years. 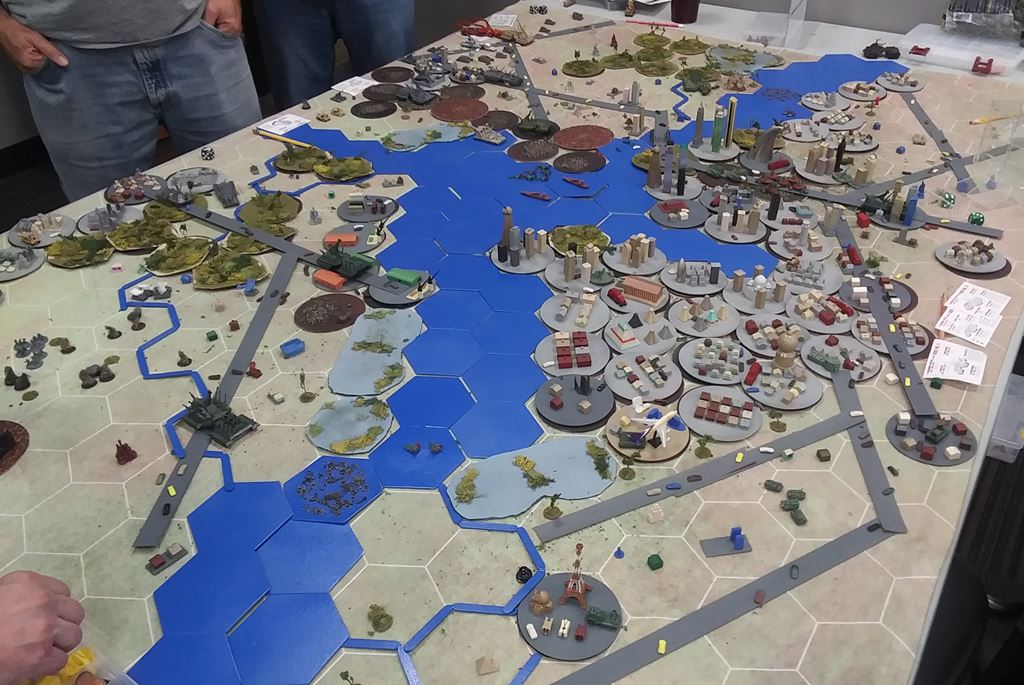 You can't get much more asymmetrical than OGRE, one unit vs 20+. Though in this case, it was more like 5 OGRES and a GEV company vs 2 OGRES and the usual army of tanks and artillery and emplacements.

Despite the vast difference in models, the turns were approximately the same length, with each of the big units simply having many different attacks at different ranges and power and once-per-game. It really keeps the it from feeling like a fair fight, with both players being presented with interesting decisions.

It's also a game that's largely unchanged, though expanded, for 45 years. And it's still as interesting, played by the same players, as it was when it came out. A game doesn't need a constantly changing set of rules and stats to be interesting. Sufficiently well written rules invite people to play with them to make scenarios and riff on the core mechanics. A lesson TTC would do well to pay attention to.

A fully balanced and finalized set of rules does not kill a game if they are of sufficient quality. 200,000 copies sold is I'm willing to wager orders of magnitude more than DZ/FC has sold over the 10 years and two publishers.

Homebrew 1/285th Armour-only, based on Flames of War - Objectives and Symmetry

A homebrew adaption of the Fate of Nation rules for Flames of War run by the FoW tournament organizer for that weekend. 1/285th or 6mm scale, with only 4 kinds of tanks, but large companies of them. 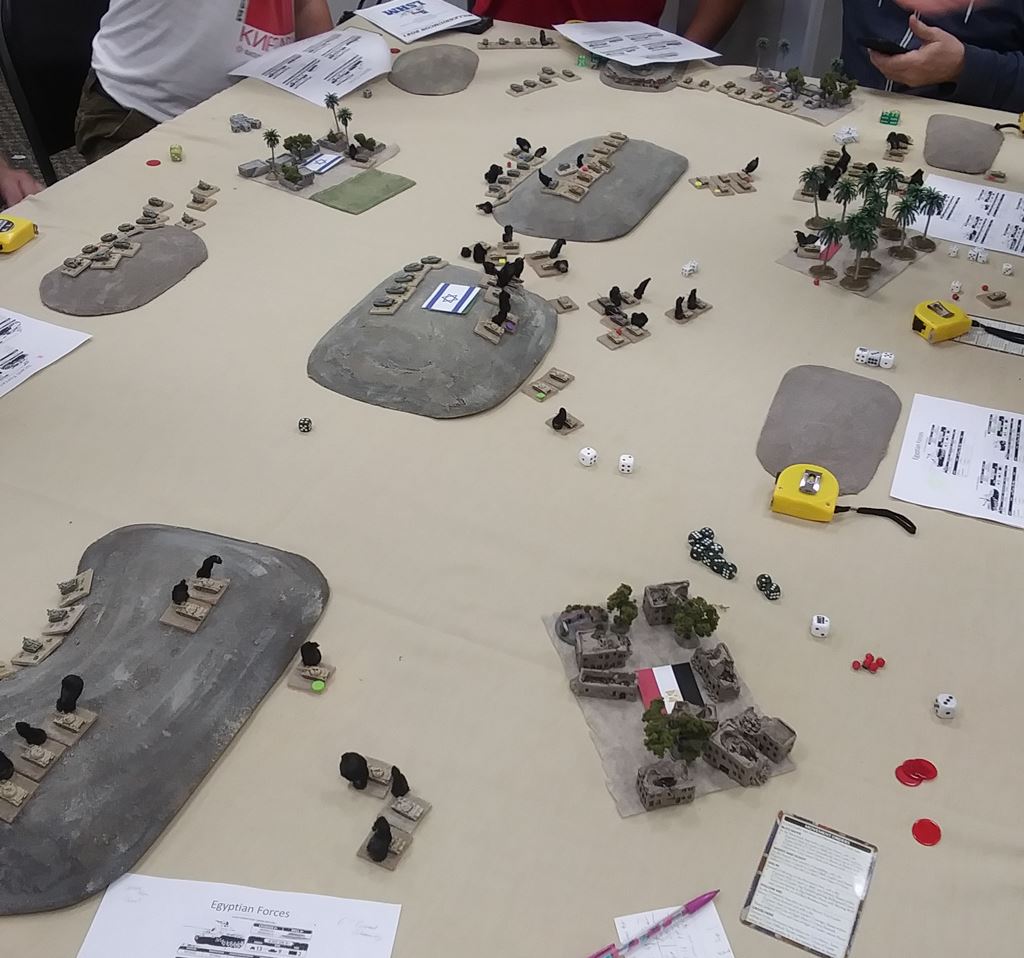 The rules were adequate, but the scenario design and unit rules rendered it frustrating. The way objectives were divided, a single point on the table was all that really mattered, with back-board points that were suicide to try to claim due to an overwhelming defender's advantage, leaving a single hill in the dead center of the table that mattered. And because of a slight asymmetry in the unit stats, my side had to take the hill early and force the opposition to move, or the game was functionally decided right then and there.

Unfortunately, my co-commanders kept trying to be cagey while ignoring the inevitable defeat by objective for some marginal gains in unit kills, which didn't matter at all. I wound up unironically quoting Sun Tzu at them, like some kind of ranting wargame weeb; "Strategy without tactics is the slowest route to victory. Tactics without strategy is the noise before defeat."

We made a racket.

Good objective design should leave no point assured, else it's pointless to include. All that matters is what can be reasonably dared.

The predecessor to Dropfleet, Andy Chambers first attempt at a fleet-scale big-ship space combat game, the iteration of which is palpable in DFC. 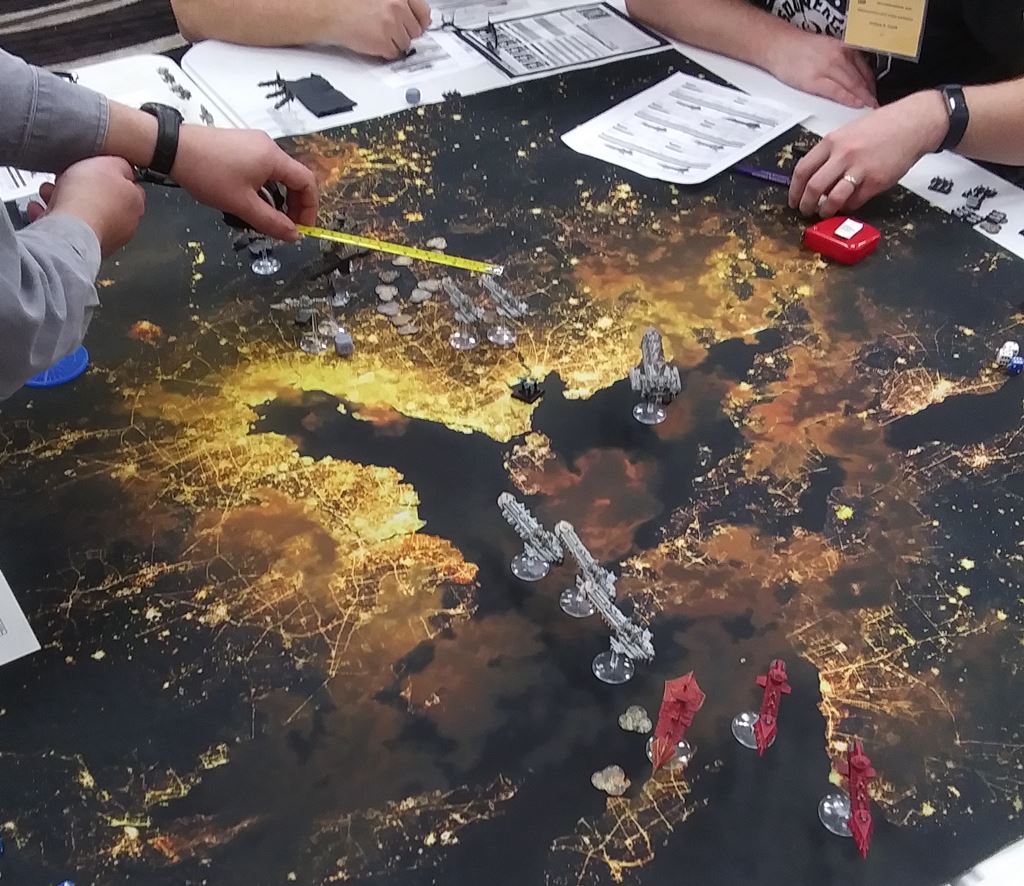 I hadn't played BFG since table games with Firestorm Armada proxies a decade ago. A fine game. IF you haven't played DFC, else it's a showcase of all the elements that have been improved upon. Most notably, it's ships fighting over empty space because "there is only war", and the 40ks noticeable hand wave of automation and computer control.

I hadn't actually seen one of the really nice DFC mats before then, and my god was it pretty. So much so, that I asked for one for the holidays (though a different one, just to be more regionally unique, and because my dark scheme for the UCM doesn't pop as well against the night surface).

The table wound up with an unfortunate mix of player types. Two of the 6 people were just coming off two straight days of competitive Bolt Action at the regional tournament and had BFG experience, while two different people had never played before and were visibly intimidated and uncomfortable with the intensity of the aforementioned BA players. Not the best atmosphere, and I don't know what the host could have done really. But it makes me mindful of paying attention to player differences and setting table expectations and trying to keep everyone at the same pace and level.

Overall, it was a great weekend, a last gaming hurrah in the nadir of Covid waves, between a summer swell and the fall semester surge. I am greatly looking forward to Mill-Con 22, and hope to run some Drop games myself. Expect posts to that effect in the coming months.