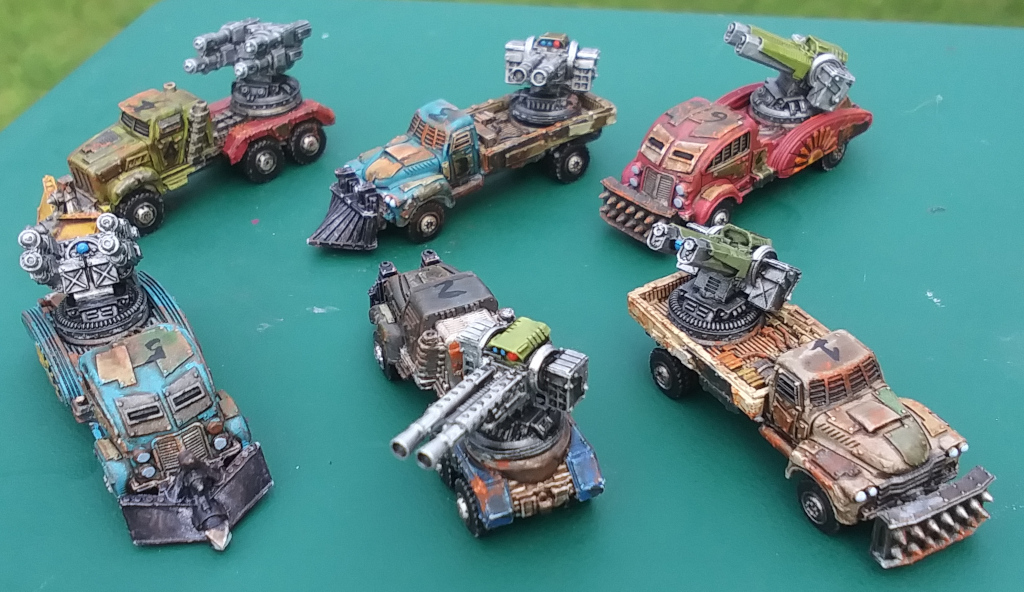 I've been putting off finishing my Gun Wagons for at least half a year now. They just weren't exciting me, and I wasn't envisioning how I wanted them to look and how to get them to that point, so they just floundered, putting around boards with a base coat and visible primer.

But as part of my push to get everything finished before my FLGS's Grand Reopening, I knuckled down and didn't let myself work on anything else. Once again, painted them up in bright garish colors and then used a dark brown wash to tone everything down. I, uh, fucked up ever so slightly with the wash. Used the wrong brush, the one I'd been doing metallics with that night, and if you look carefully there's some stray mica that wound up in weird places on the model.

Post-wash, stippled on a dark red brown color, dry brushed silver over railings and other wear points, then used a bit of sponge to apply 'rust effect', which is I think just an orange that dries rough but I like the effect.

I stopped by the Game Kastle in Austin during their soft opening and found some weathering pigments I needed, having given up on ever finding what I did with the last set I owned. So I need to apply that around the fenders and undercarriage and footrails and then do a dullcote overtop. I was surprised that I wound up painting the underside of these models. They just did not look right leaving it unpainted for some reason.

The end is in sight.