More dropship variety without a different transport type. An alternative to the different types of Raven, with a greater capacity per point for a very modest reduction in range. Aesthetically, it calls to mind the colonial marines dropship from Aliens or the mobile infantry dropships from Starship Troopers. Love it.

I'm not sure what the AA missile racks are supposed to accomplish. Is the vulture supposed to drop cargo and go hunting? The range is too short for defensive reaction fire. But they're optional, and I think the bare vulture is a better prospect than trying to up-gun a relatively squish transport.

Interestingly, the Vulture stats were accidentally leaked almost a year ago; it used to be 15pts instead of 25, 3DP instead of 2, no AA missile racks.

Wolfs without trailers. Which leaves the back wheels oddly splayed open, which doesn't compliment the UCM compact design ethos. Looks aside, I'm deeply unimpressed. Under no circumstances would I ever take the Nemesis gatling guns. It's been ages since anyone I play with was foolish enough to send infantry to a wall to shoot (they die to a gleeful barrage of light arms fire from secondary weapons), instead hunkering in the middle and refusing eviction except by flame or CQ.

Meanwhile, the Aggressor cannon is somewhere between worse than a Katana and a Rapier. Anything lightly armored enough for E7 to be useful is also evasive and still probably E12 or 13 so barely penetrating. I continue to state I don't think TTC is playtesting these units. They have either some bizarre nega-universe internal meta that doesn't resemble the game anyone else plays, or they just theory craft everything and don't realize how useless low energy weapons are. Which is doubly hilarious considering you can just look at modern history and see the massive gulf between small arms and cannons. There aren't any medium calibre weapons around, that role is entirely missiles.

An interesting choice that compliments the Hunter and Stalker. Slightly weaker, but substantially more maneuverable. I don't quite buy the transportation method, it feels arbitrary, the underslung Harbinger pod and the next Scourge unit, rather than something designed for each other. But that's the least of my complaints around the ~~Raider~~.

And also kinda irrelevant as their speed is enough to be hitting mid board Turn 2, skipping Aerial Advantage and just skimming on to the table.

The photon blaster annoys me with the lack of explanation. It feels like someone just slapped a scifi sounding name on it. I can't tell if Lewis Clarke thinks he needs to dumb Dave's lore down for customers, or if he himself doesn't understand it. I'm also not a fan of destroyer-like rules. 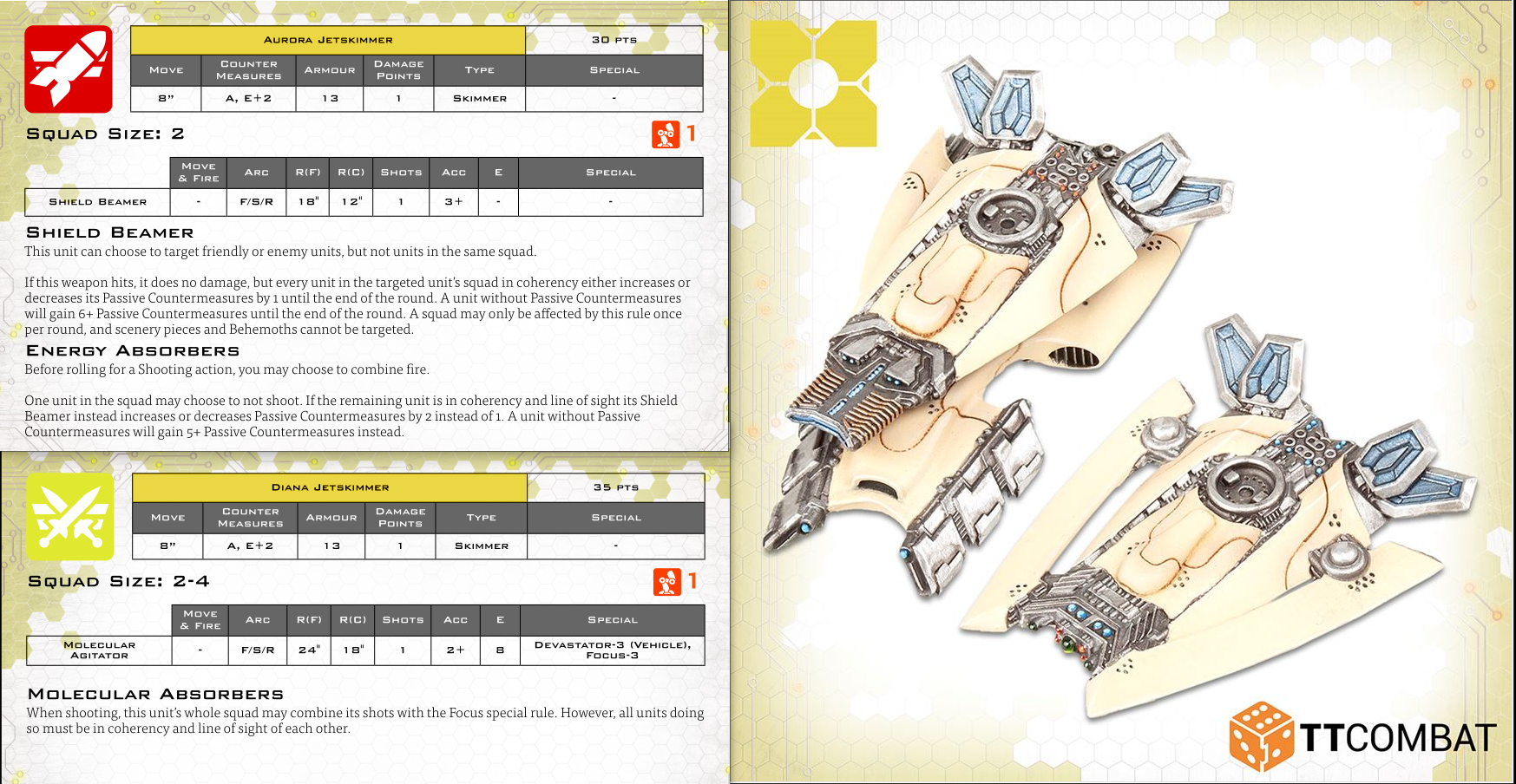 Massive strike against the Aurora right off the bat for that wall of text it has. TTC can barely write as-is, so the more time they spend spewing words onto paper, the worse things get. It's a mess. I think I understand what their intent is, but the phrasing and explanation is just bad.

But also, can we please stop making the PHR harder to kill? Or at least fix the Phobos/Erobos Acc penalties that stack and can't be countered first?

The Diana is a cool concept, each unit focusing on one member, boosting its damage output. I've got no complaints about the design.

But again, I'm not kidding when I say I think Lewis Clarke doesn't understand what Dave is handing to him. The weapon on the Diana is called a Molecular Agitator. But the special rule is Molecular Absorber. Agitation I get, that's a common scifi concept, absorption less. And then I found the Dave blurb that doesn't make the announcement posts anymore, but winds up in the store front. Dave describes the skimmers as having 'Collectors Vanes'. For the energy. Not molecules. It doesn't absorb them. 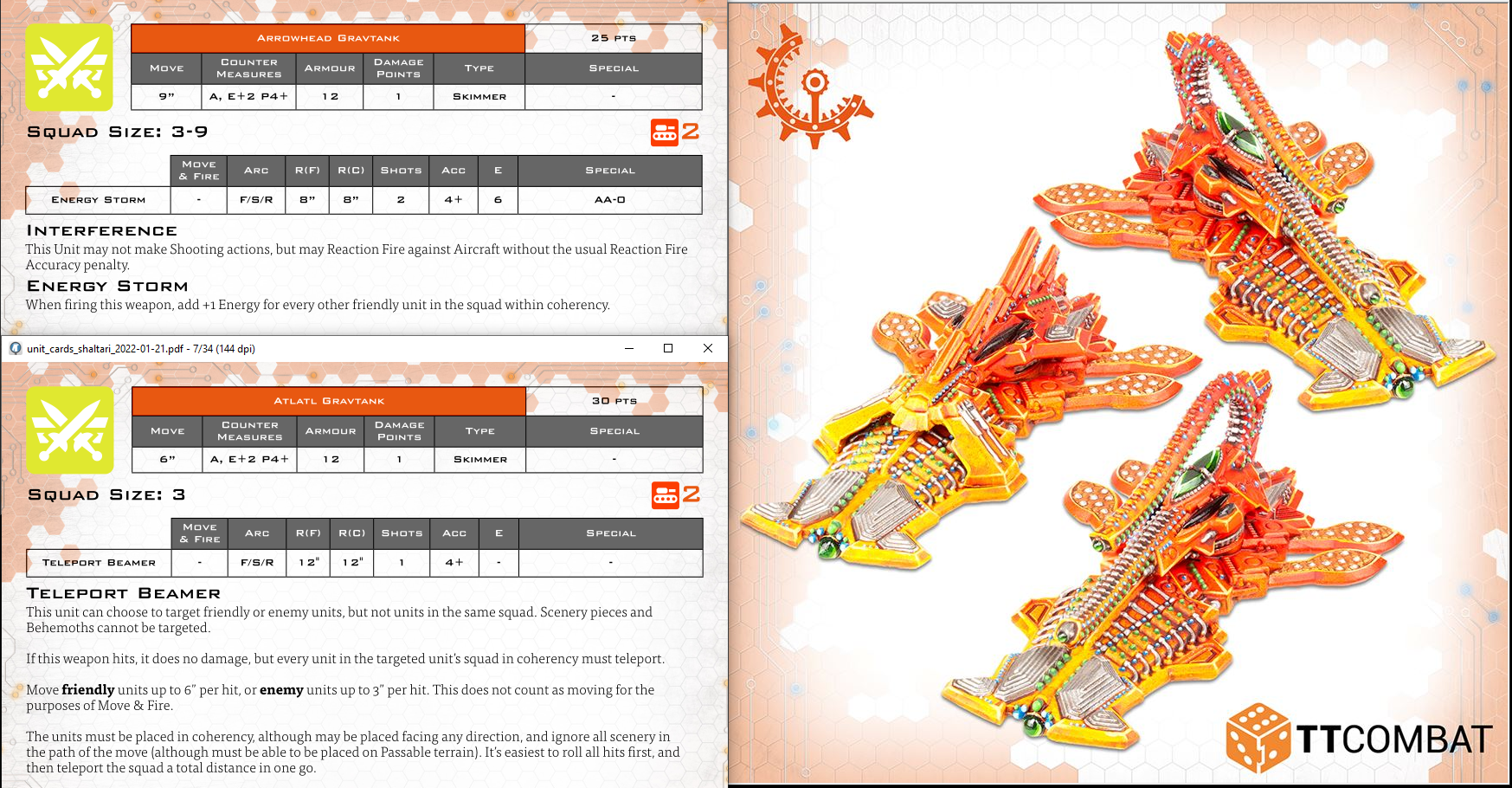 A minimal squad of 3 Arrowheads is throwing out 6 E9 shots with no reaction penalty in a 16" bubble. That's a hell of a No-Fly zone. Even heavy fliers are A11, rarely 12. A squad of 6 dropped beneath a commander is outputting 12 E12 shots, which is crazy. I think the wording may be a mistake. Or just badly balanced. My friends are fairly worried about the power of this one, and I agree with them.

The Atlatl is yet more teleporting shenanigans. It can royally screw enemy infantry, leaving them out in the open and thus imminently dead. Again, poorly worded, it sounds like Teleport should be some kind of special keyword but it isn't. It'd make a lot more sense to me if the Shallie units could exit a gate with the range listed, being forcefully gated. Just popping them around the board with no restriction seems lazy. I'd also be cool with the teleporting having to happen with an arc of one of the units in the squad, like a directional beam.

I am annoyed. -2DP gets you: +3" movement, +1 Accuracy, +6" range, a needlessly fiddly 10.5 energy rule, a better Force Org slot (standard instead of heavy) and most importantly better transportation options. The Patton feels like it exists to cock-block the Hannibal. I cannot overstate how much of a disadvantage the Lifthawk is. It's slow, unedergunned, and expensive. The Patton meanwhile get to use hovercraft which means it's firing at base 2+ Accuracy as soon as it rolls off turn 1.

Oh, and it has another low-E weapon for you to ignore.

I dislike when a new unit is just a better version of an existing unit. Boooooo.