I've gotten behind as blogs are want to do, and it's only partially excused by a breakneck work schedule me and missus have been laboring under combined with my own procrastination. I've scrapped like 3 partially written articles and I'm just going to do a big summary of it all and move forward.

I discarded a T O N of pictures I took as my phone's camera is performing worse and worse in less than ideal lighting and so many of them looked rotten potato quality. There's been many a well composed shot that came out blurry and dull and that's been dragging on my will to post as well. Should have that sorted out soonish.

Haven't played nearly as much as last year, for a combination of other new wargames we're playing and a general dissatisfaction with TTCombat's handling of rules and stats.

So it was a pleasant surprise the latest rules update were pretty good. Though I still prefer simultaneous CQ, their latest iteration of close combat in buildings is one I think I can live with. Lots of other reasonable small changes and tweaks.

Importantly, there was also a promise to fix all the typos and discrepancies between the 3 sets of unit stats they publish, and for about a day they had it sorted, but now there's new discrepancies and they're back to their old ways because TTC doesn't learn from mistakes. sigh

Anyhoo, I've been working sporadically on some battle buses. The scrappy vehicles are mentally draining to work on. They need to be non-uniform, with lots of details, so I can't crank them out in batches while watching something like I can more uniform models.

I finally scored a cheap set of the monorail pylons, though still no actual monorail. Which was as good an excuse as any, combined with finally finishing all my crabs, to play a game. We adapted the monorail scenario ever so slightly, and used a Scourge Desolator as the railcar. 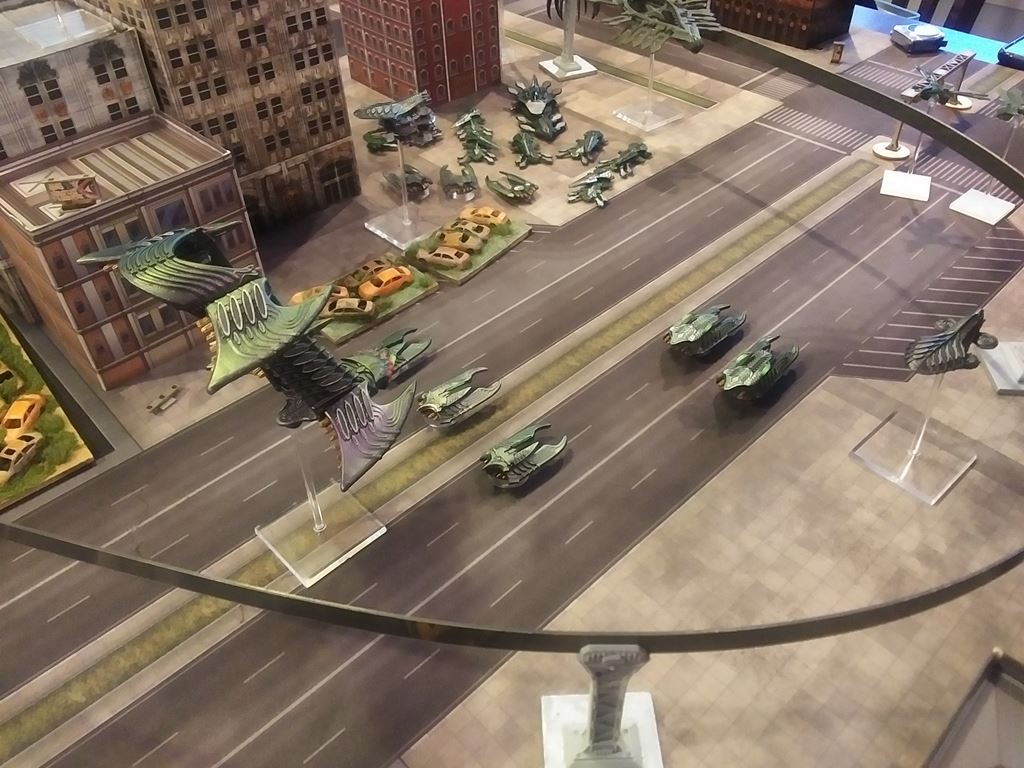 And what an odd game it was. Basically half the board went unused as we all dogpiled into one section around the bend of the monorail. 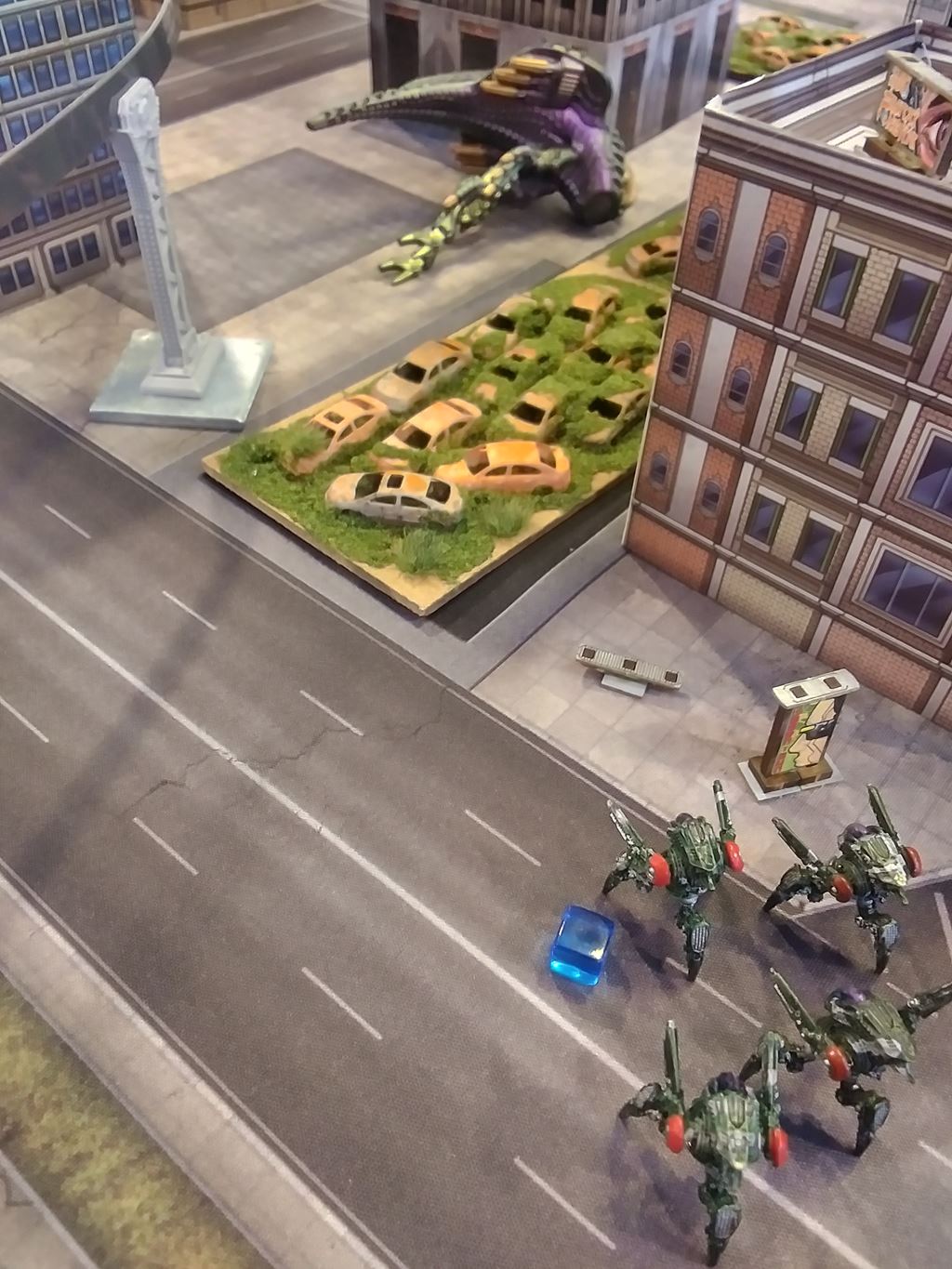 The Annihilator did the most work it's ever done for me, landing templates and taking out Shaltari Tomahawk skimmer MBTs. Which called down the wrath of the Ronin who made short work of it. 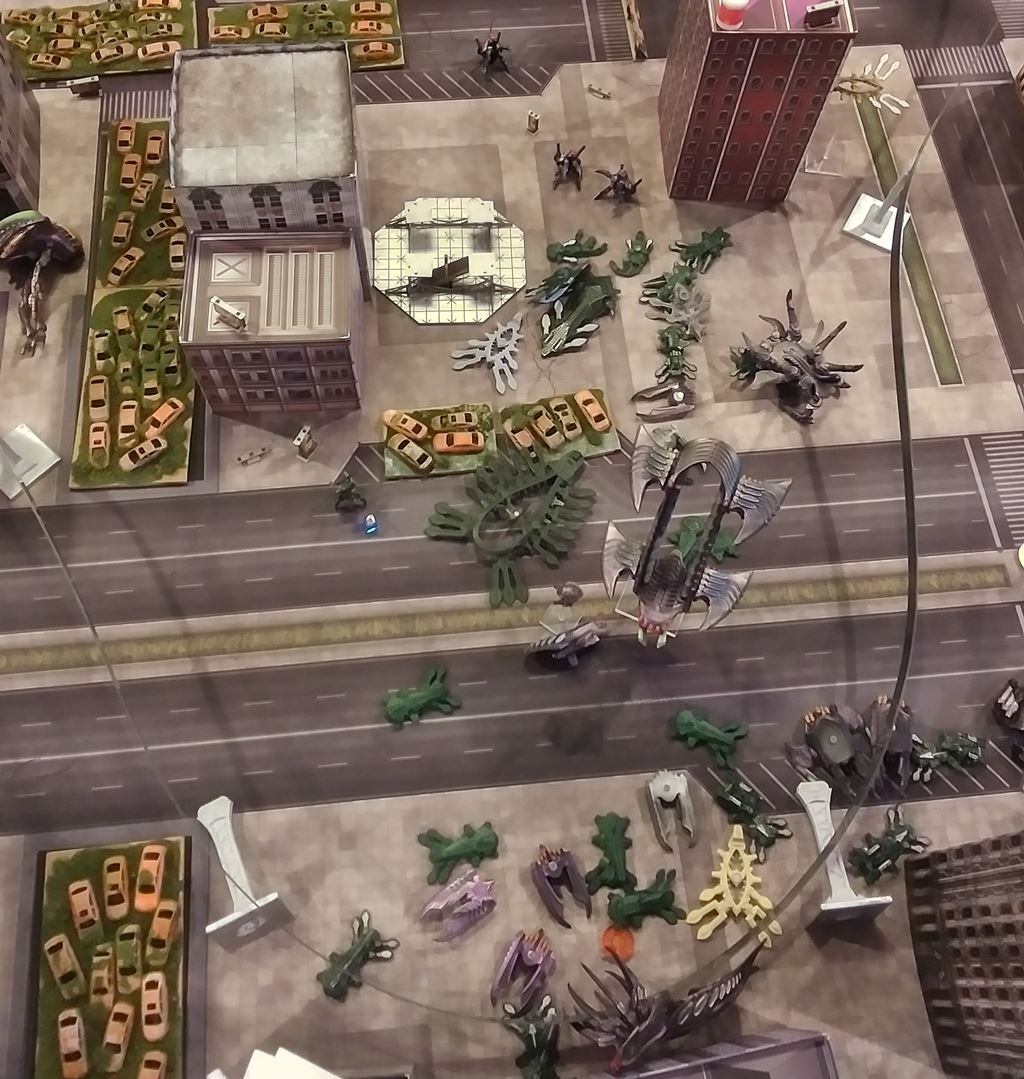 Final moments were a blood bath, with units piling up like Blues Brothers police cars. 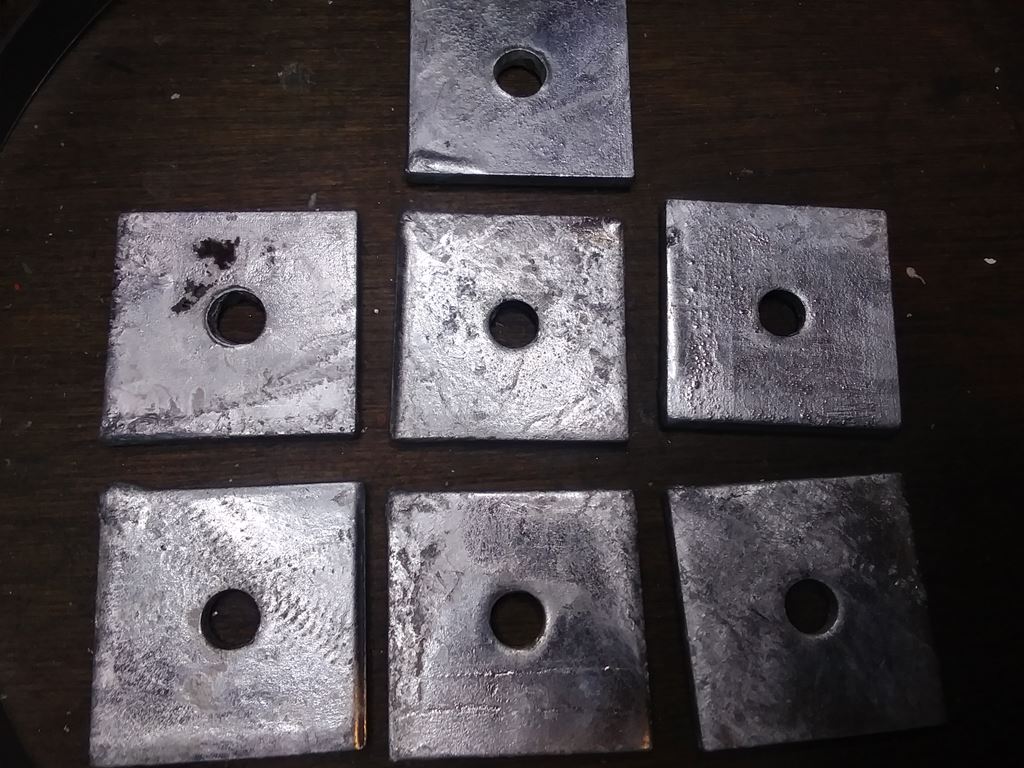 I was surprised by the bases of the monorail pylons. They're these weird slightly irregular lumpy chunks of metal. Like a washer, but made of a softer material. I have no idea where Dave found these. They work a treat though.

More games. Just more games in general. And terrain for those games. I need to paint the monorail pylons, and I've got some cool ideas for those I hope to show off soon. And then I need to work on the MDF elevated track sections, and someday finish gluing all the tree material on the tree trunks.

Model wise, I've got to finish those buses. Then I'd like to work on some Resistance aircraft, a Strikehawk or Hellhog or maybe the Typhoons.

I've played more Dropfleet than Dropzone recently, owing to its newness and friends completing models, and relative ease of setup.

Got lucky in an auction and found these awesome acrylic cut tokens which sadly appear to be out of production. I'd love a few more, even at full price. 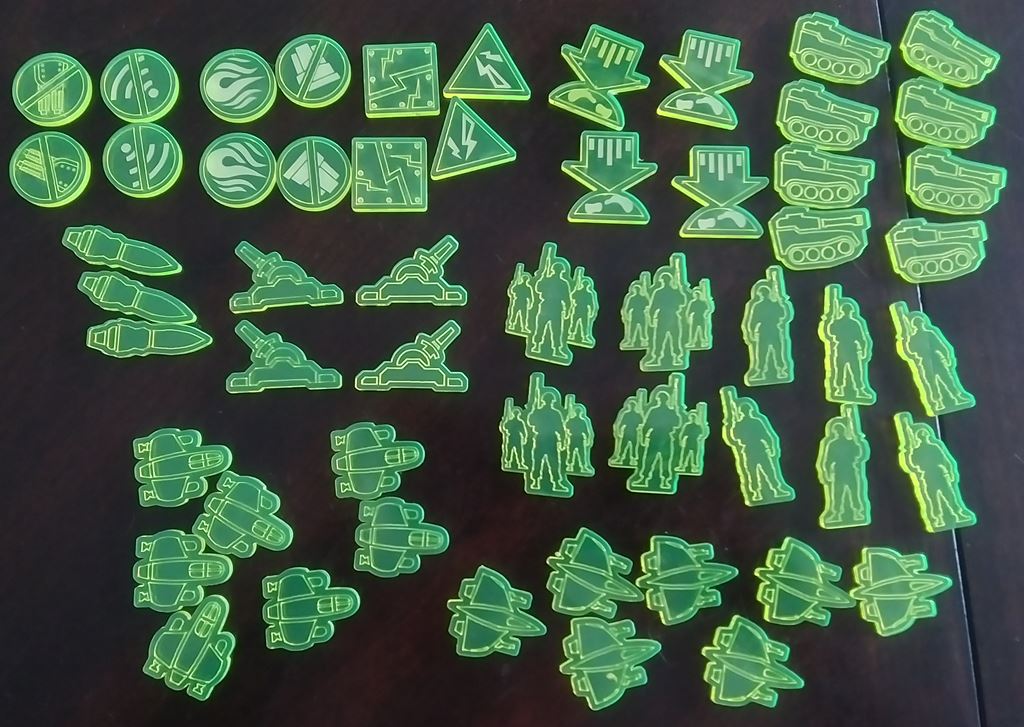 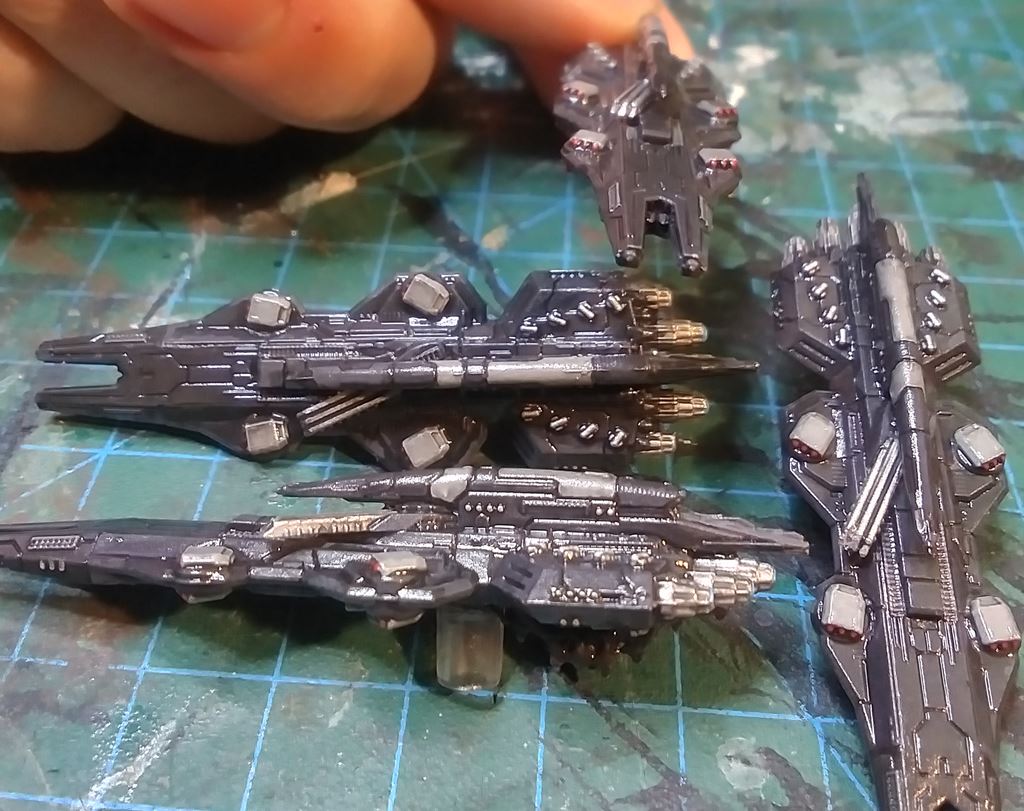 Finally finished 4 of these guys, though I think did something different with the varnish because it's thicker than every other ship I've done. But they're done and protected and they can go in the box and off my desk.

Collected photos from a couple games here. Ty's Remnant ships made it to the table. They're deceptively punchy, and I don't think I'll be ignoring Seneccas a second time (and what an awesome model they are). 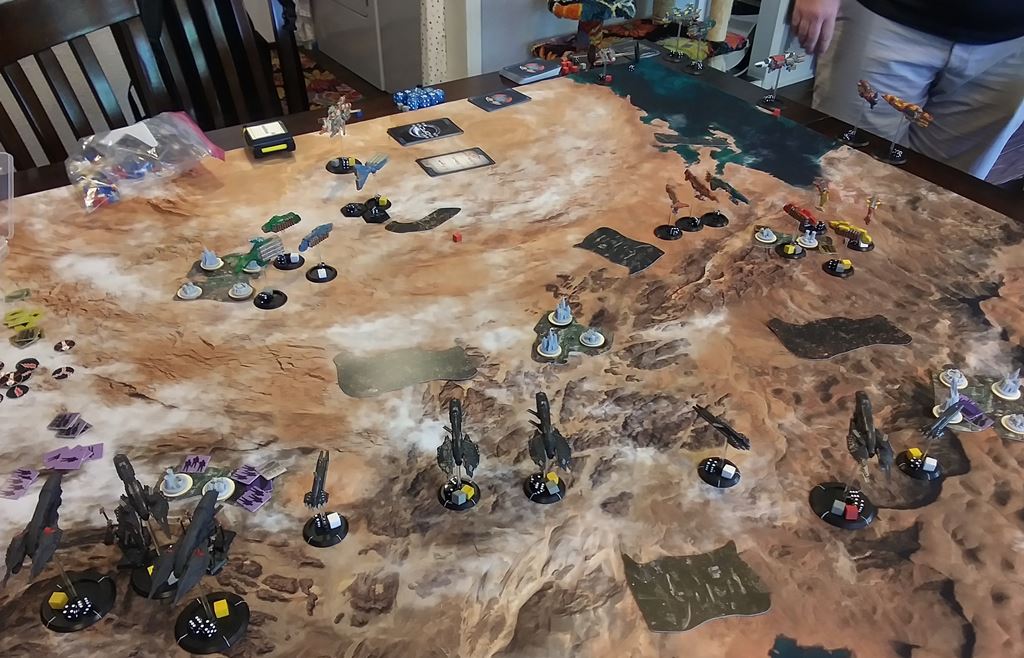 Similarly, Tree got some Shaltari based and in-progress enough for a showing. He went particle lance heavy, which really cuts through PHR. He's of the Shields Up! early playstyle. Both of us really need to get some corvettes finished, Ty is able to swing some games hard just by having air-to-air capable Echoes and Munifexes. 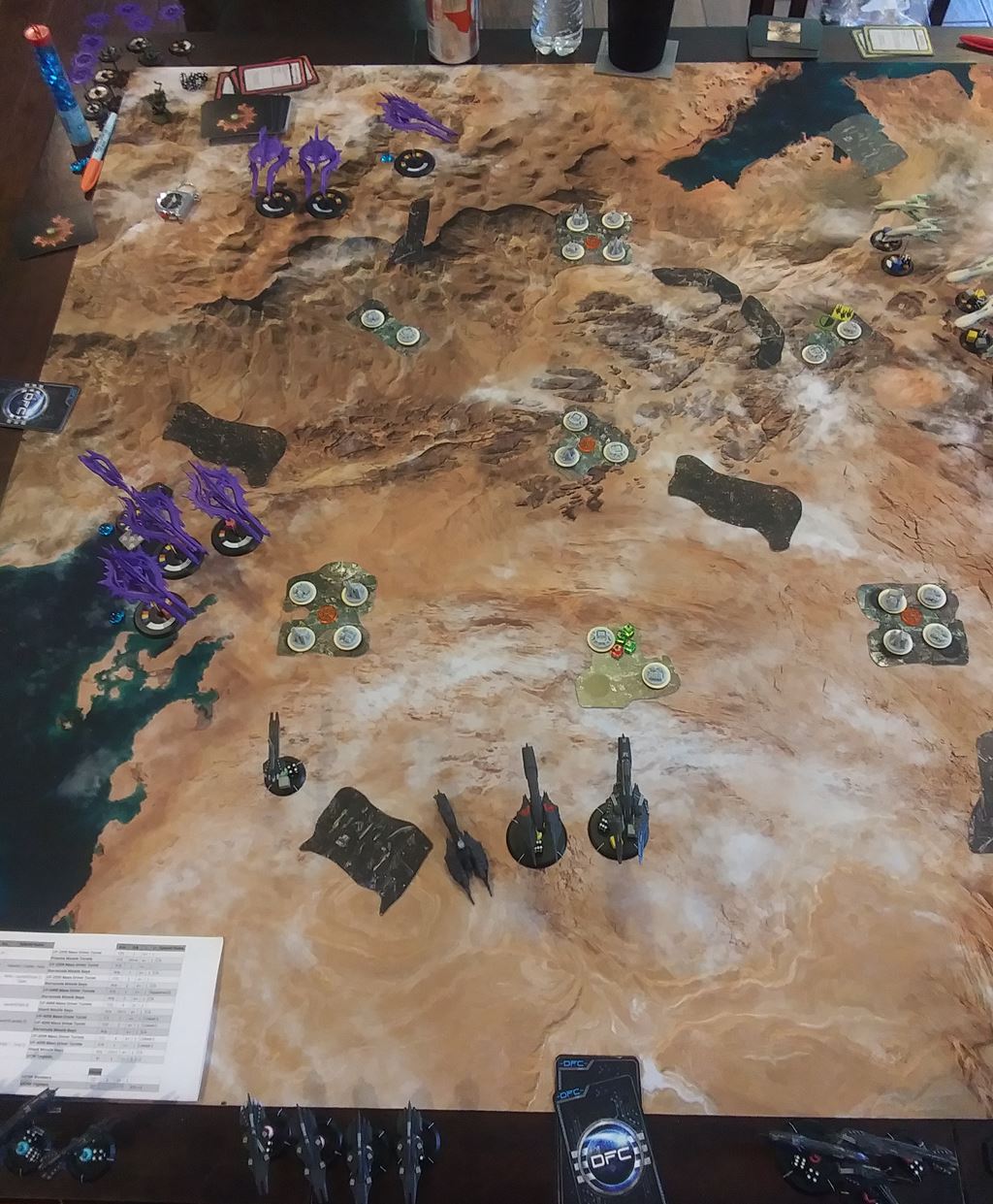 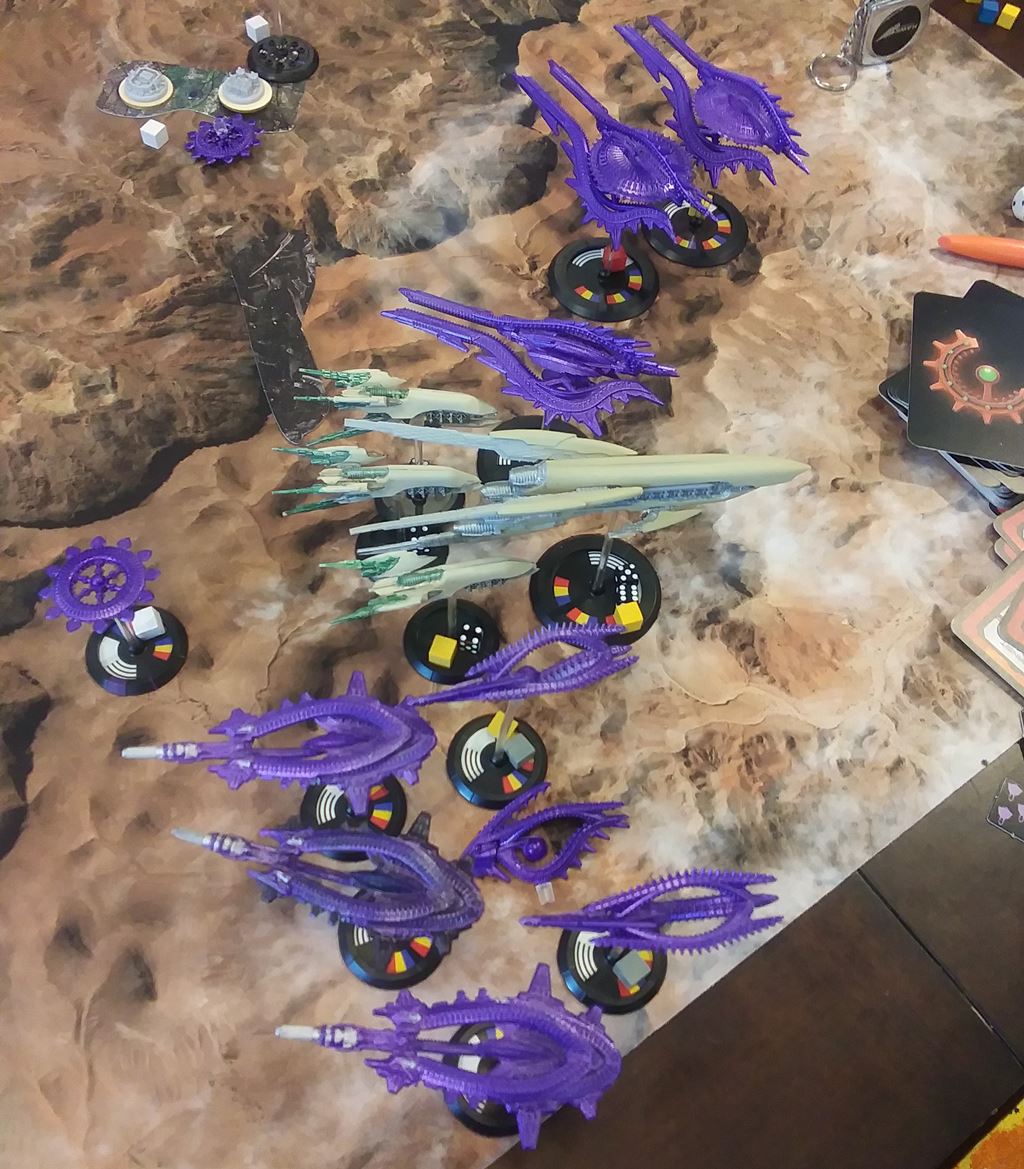 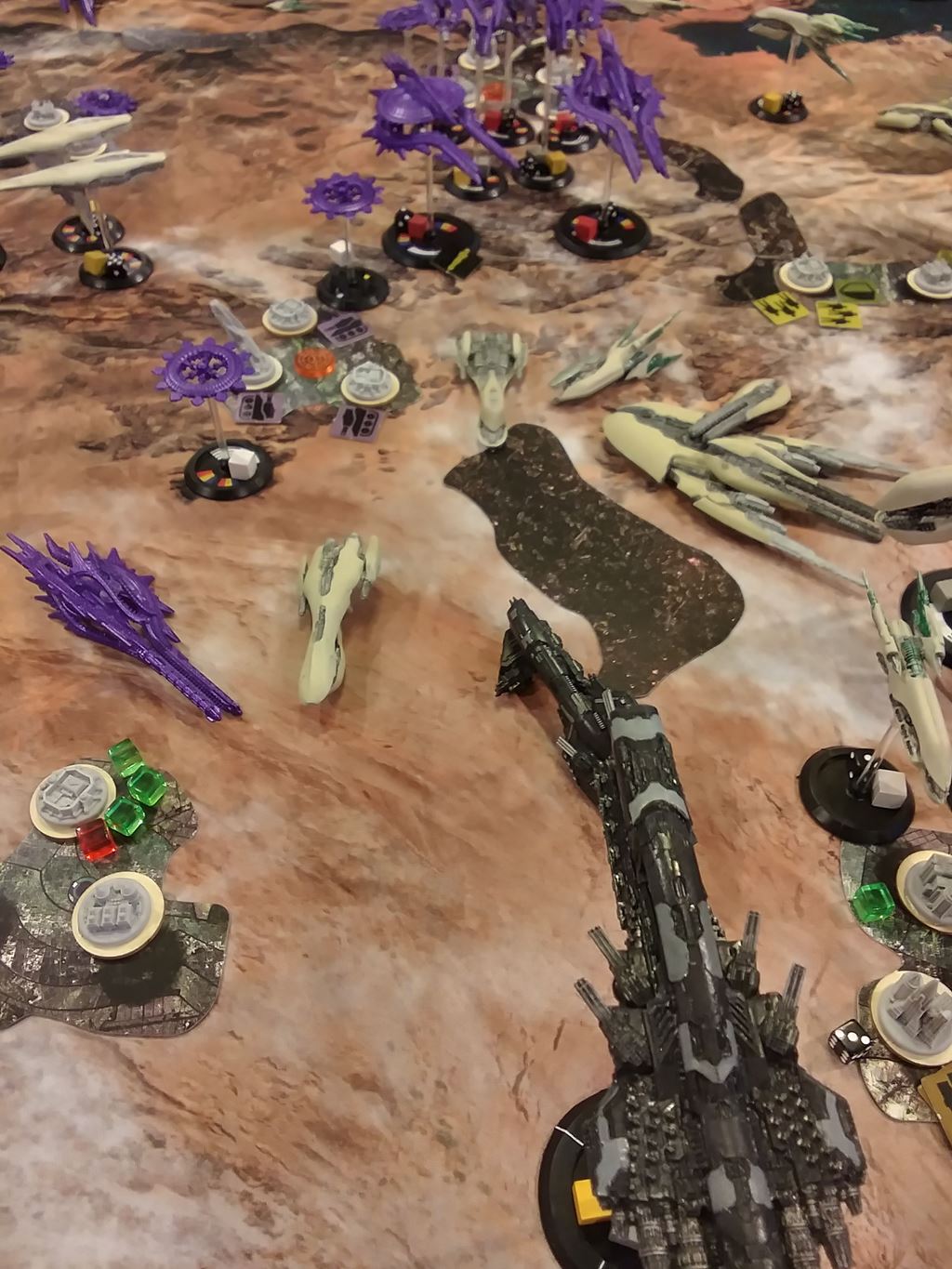 I found a few local players at our FLGS (Game Kastle at Mopac/Wells Branch) and I need to get out and play some games with them.

Models wise, I need to finish the UCM on my bench, cruisers and corvettes, and then I'd love to start working on the sector tokens.

What I've played the most, I believe, since last post. Sadly, not a single game pic made my cut. 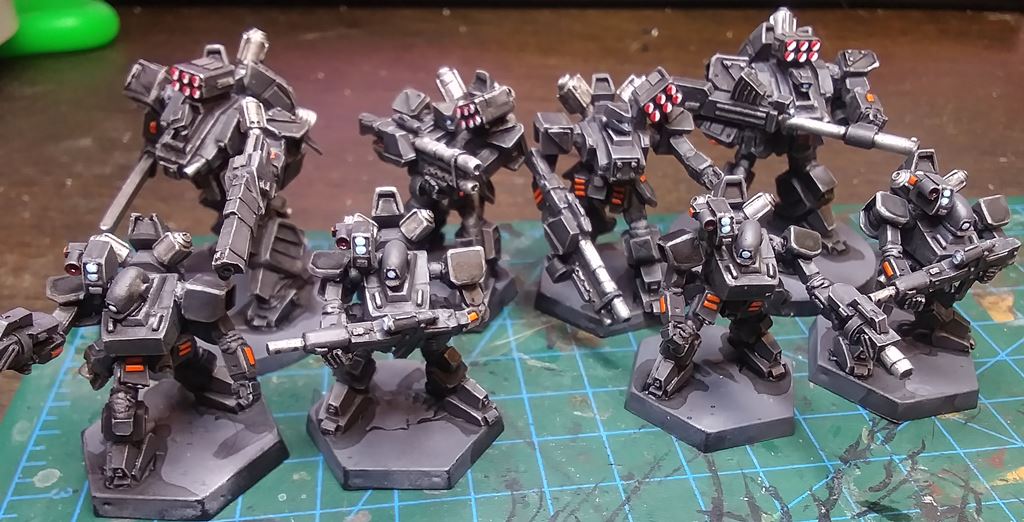 I like having two forces, for variety, for demos, usually because I like the looks of more than one model, etc. I wanted a force the opposite of the Southern chaff thing I had going, an elite force. Thus, these dudes. Operator types in tricked-out stealthified gears with big guns. Painting notes, for my own sake follow.

I did a small recon Raven gear as a test piece ahead of the rest of the army. Haven't gotten close up shots of the rest, as I still need to base them, and I don't know what exactly I want to do there yet. 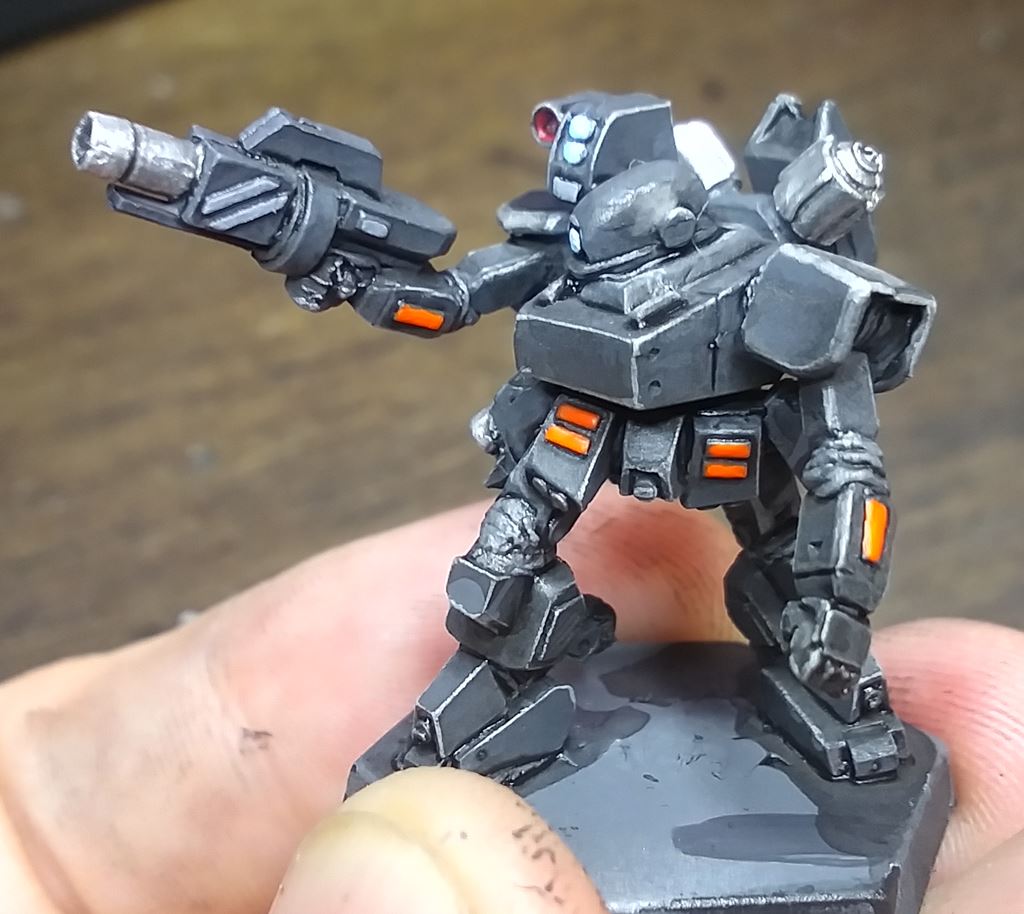 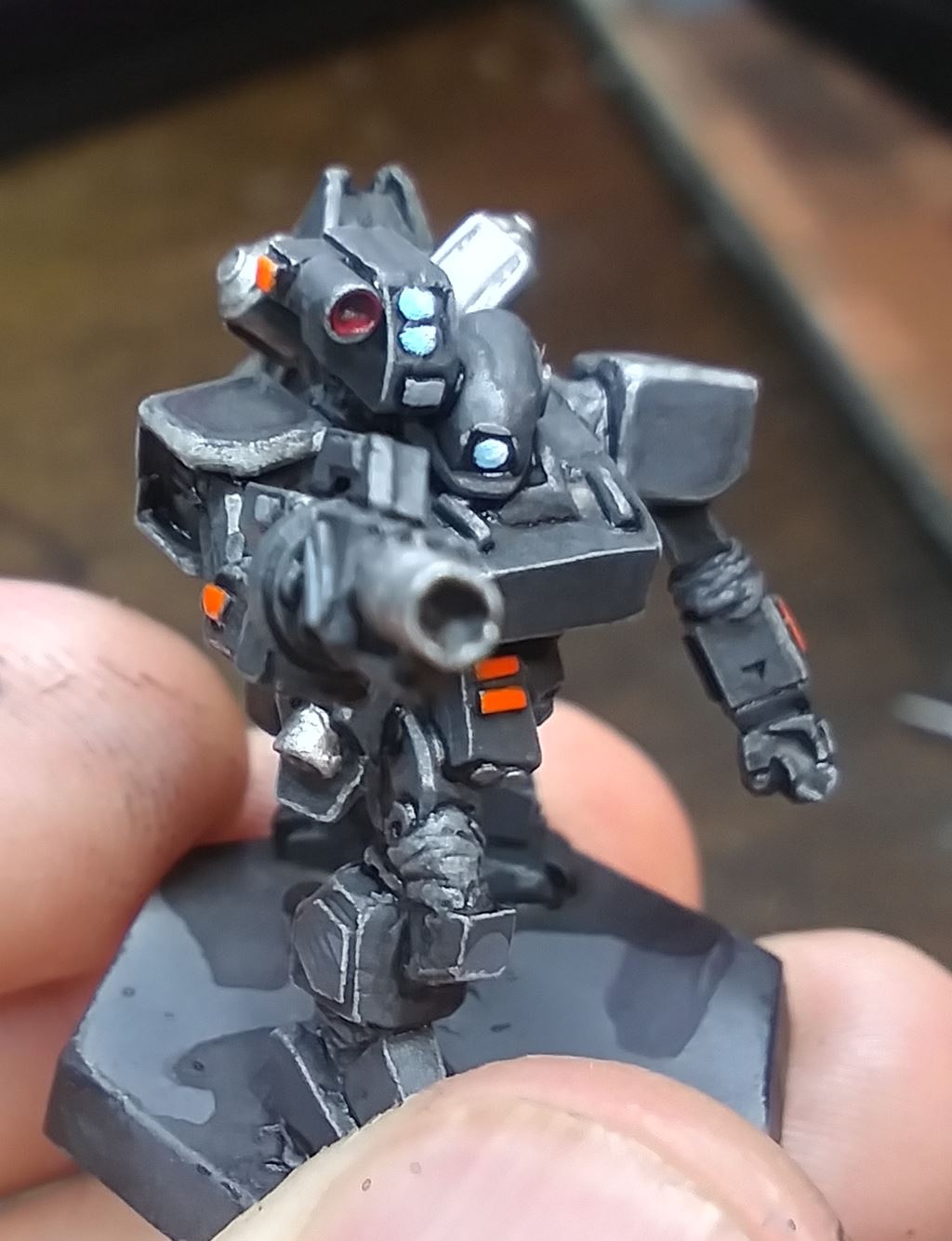 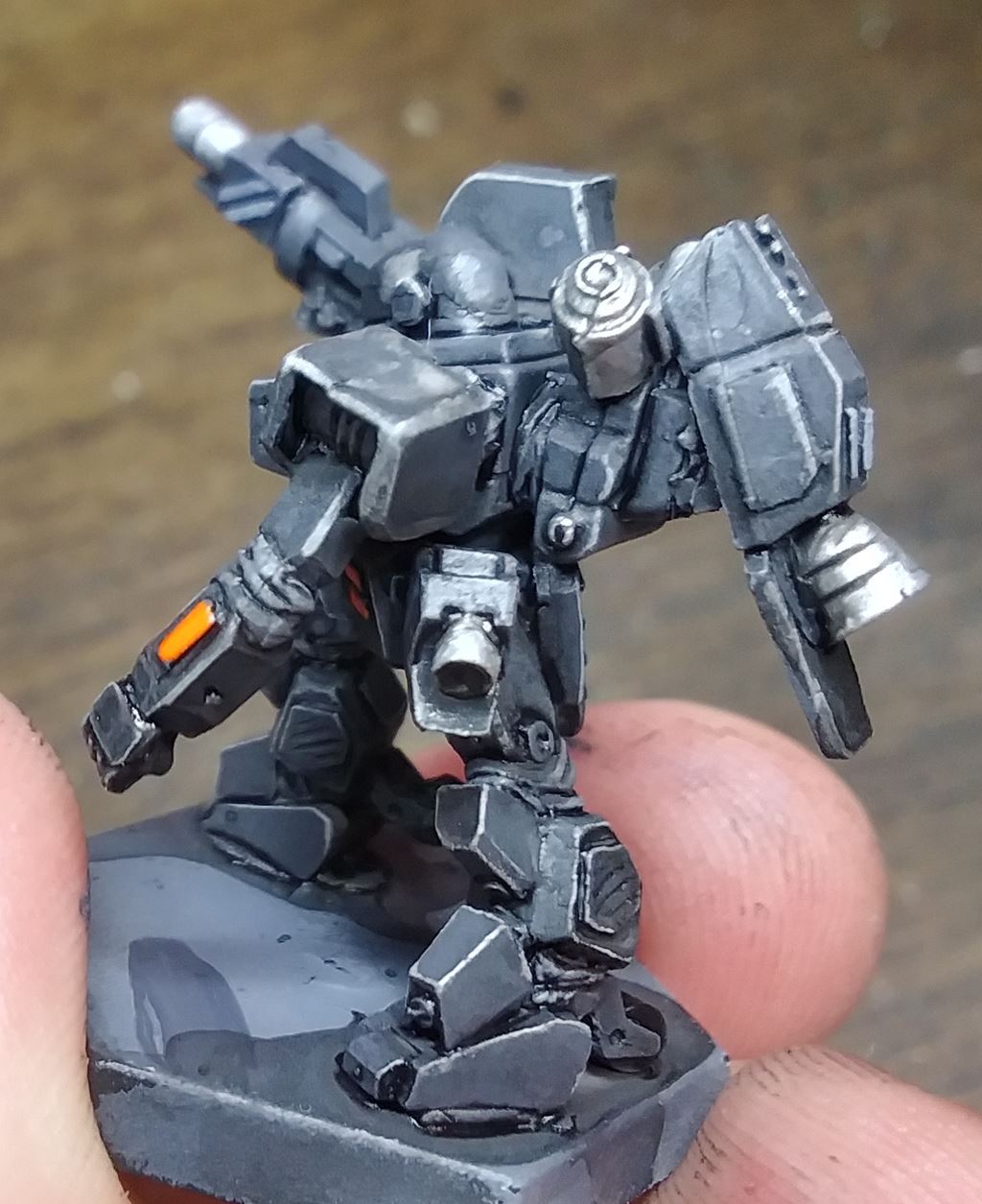 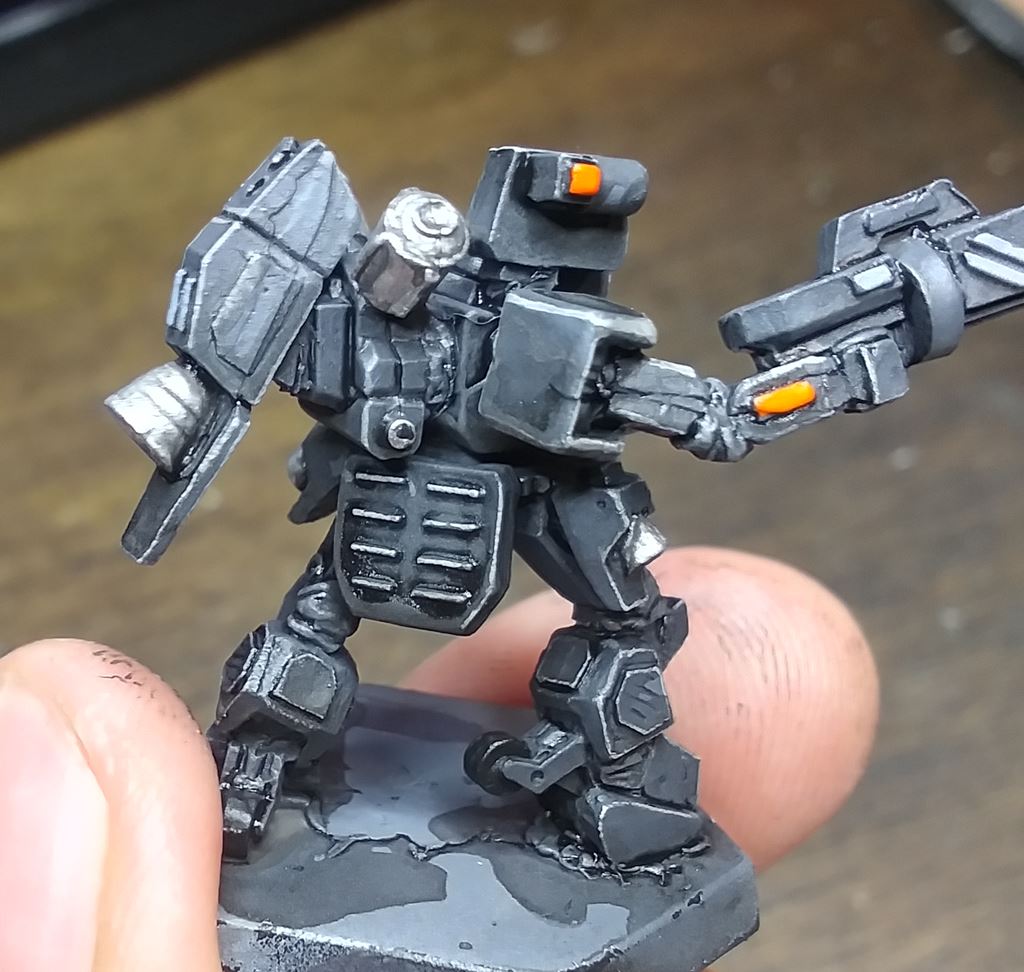 I also completed a massive batch of two boxes of Southern infantry. I really like the great coats and caps the models have. I, uh, misplaced my painting notes here. 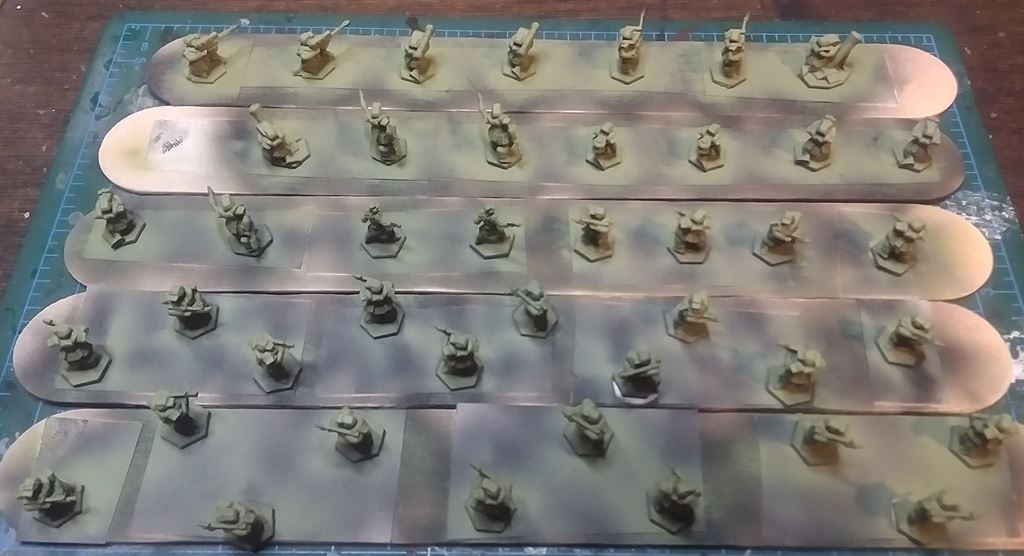 Stage 3 - highlighting with the base color, blocking simple details like the pouches, guns, boots.

Stage 4 - I decided they were looking a little flat, so I used a slightly different color green to pick out the armor sections, gauntlets, chest plates, pauldrons. Just makes them look a little more interesting. 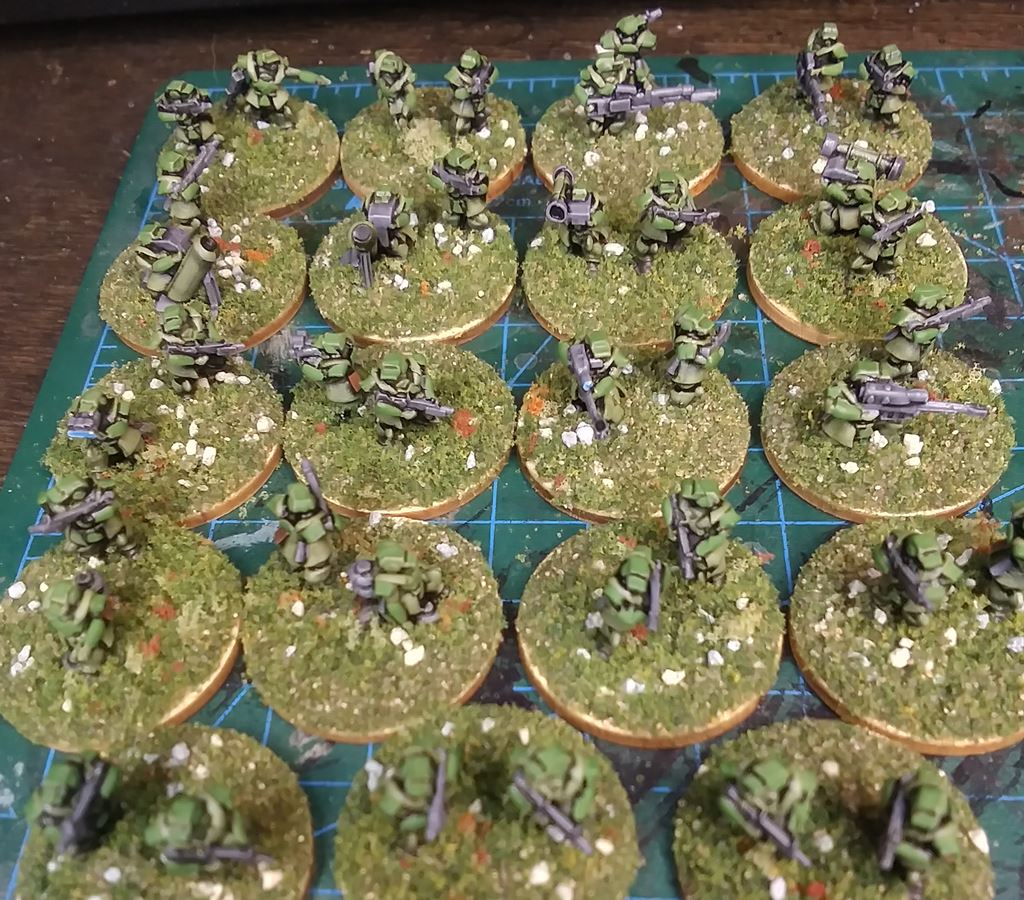 Bonus - Field Guns. The blast plate was tricky to get mounted right, and I lost control of my wash on them so it came out sloppier than I'd like, but I can live with it.

A precursor or alternate of the stealth look I settled on for the Black Talons, the South has stealth gears and I wanted to try a super hard contrast B-2 style, which I think comes off a little too different to the rest of the foce, but it also looks kinda neat and I still don't have a better idea so I'm sticking with it. 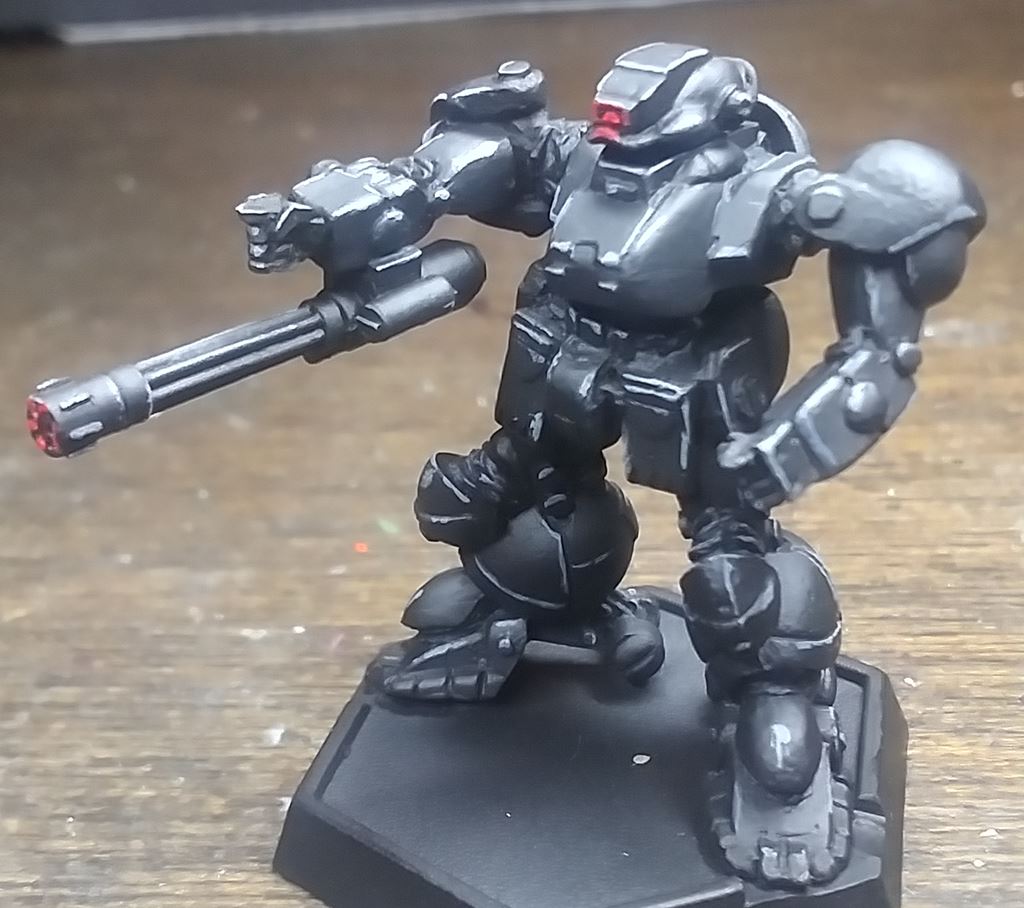 Lighting makes a big different in how it looks. 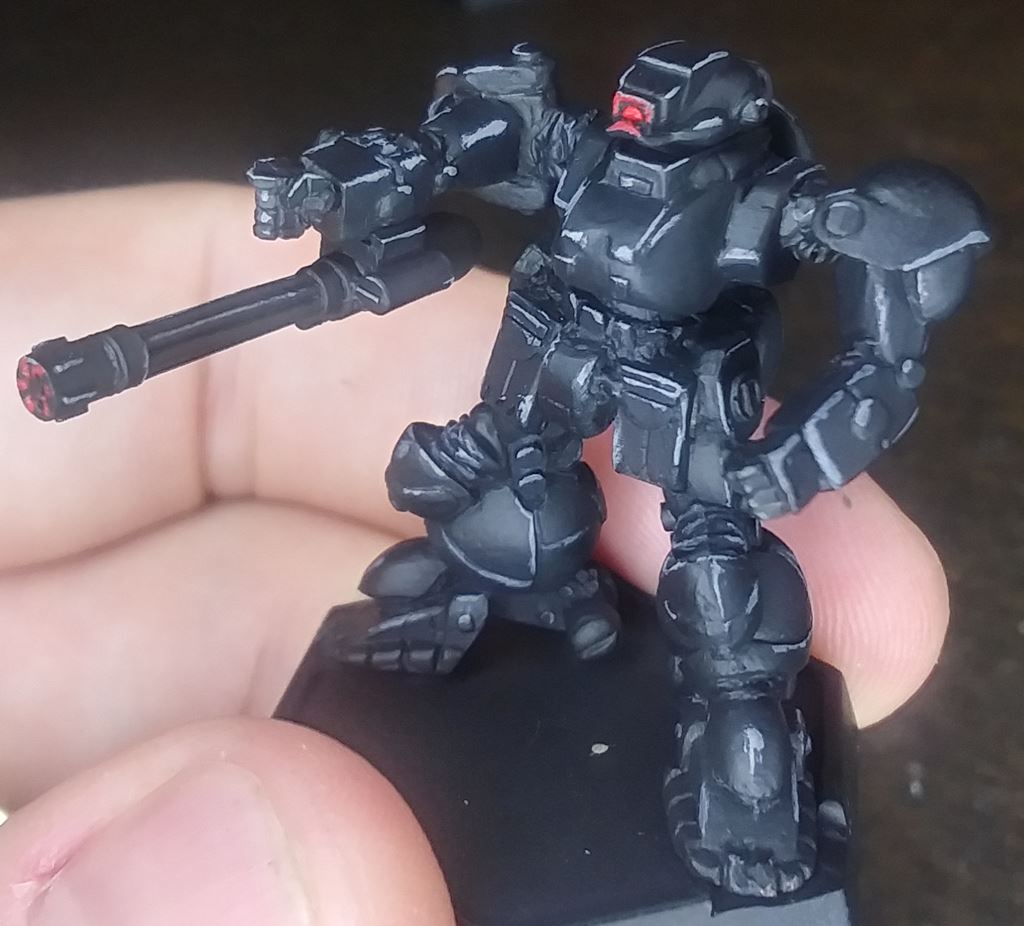 Lessons learned. Throwing a lot of dice at bad odds doesn't work. Concentrating bonuses however pays dividends. Caprice is adept at one-shotting models, at many ranges. NuCoal special MRPs are a workhorse weapon.

Still enjoying the game immensely, looking forward to more games of it.

Mostly terrain work, but I'd like to get some of the larger bipedal striders for the South. I also made a dumb blunder and ordered and built and primed the wrong model for a replacement Owl (because I hate the official model). I had a Warrior IV when I meant to get a Harrier. Next time I need to order from Fortress Miniatures, I'll definitely have one of those in there.

Tree snagged a super discounted Cruel Seas (Warlord WWII coastal boat combat) starter set, painted up some ships, so we got it on the table for some playtesting. Initial impressions were generally positive, we found some bumps in the rules, the models look cool, and it's a novel type of naval game.

We got ramming wrong, kind of, I think? The game seems to not want that to happen, but it seems really easy to cheese. Our second game we added in a plane, and discovered a huge gap in the rules around flak fire. Like they forgot an entire paragraph there. Torpedoes are finicky and swingy, which is partly intentional I think but we still managed to get annoyed at alignment of markers and timing of movement of them.

I found a dude that had a good write up of simple fixes and I think I'd like to try these next time we play. Cruel Seas: A Naval Officer’s Perspective Some really simple and obvious changes like 'this is how boats work' for movement, turning, stability, and humorously 'ramming actually happened a lot, totally valid tactic'.

And I'm on the prowl for some cheap ships, probably Soviet, either at the MilleniumCon flea market or by taking advantage of Britain's decision to shoot its economy in the foot (head?). 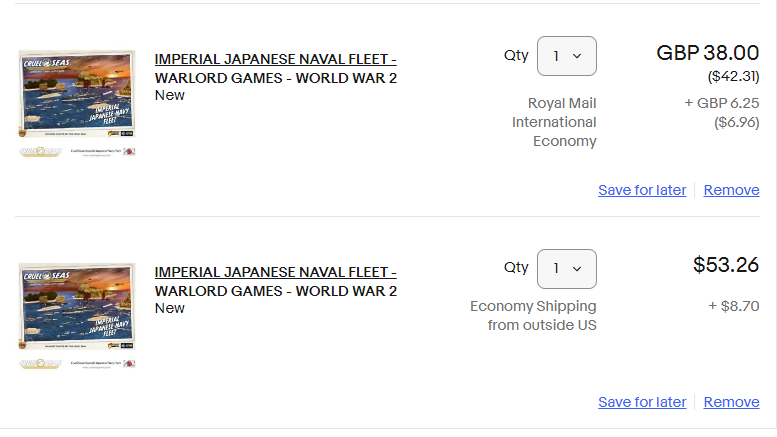 I've been reading the rules to some of them, and found this striking section in the back of Web and Starship, in the designer notes by Greg Costikyan. It's good to remember this kind of diatribe predates the world wide web.

Less than a month away from our awesome local wargaming convention and I'm super excited to attend again. For the second year running I fucked up my registration plans. I knew registration opened 6am on the 1st of October, but then I confused my fool self going into that weekend and thought the 1st was Sunday when it was in fact Saturday so I signed in exactly 24 hours late and was briefly surprised to see how many seats were gone in mere seconds... before the coffee kicked in and I realized what I'd done. 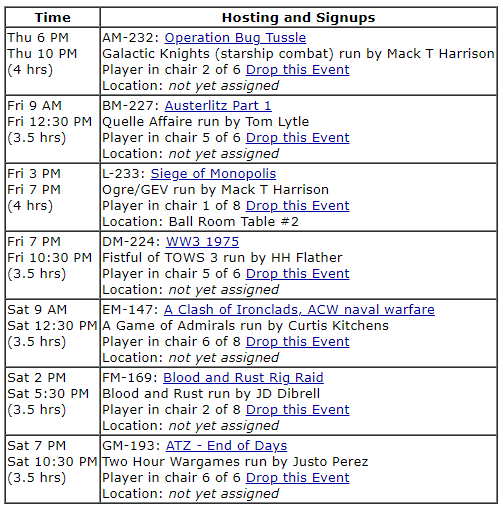 Still, I got most of the games I wanted for Thursday and Friday. Saturday was pretty full up, but and I'd love to snag a seat at Seven Days to the River Rhine if one opens up, but otherwise I'm happy with my dance card. And I'm leaving Sunday morning open for the flea market this time.